NHL GMs are boring and risk-averse, and that sucks 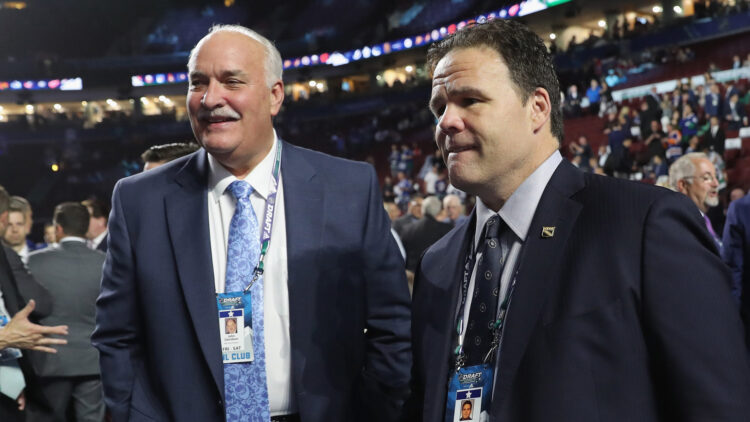 NBA General Managers are masters at manipulating the league’s salary cap/luxury tax system. They are very willing to take risks. Young players with first-round pedigrees are moved frequently. Teams are willing to absorb big contracts and are often incentivized to do so because of much more free and frequent player movement in free agency. Cap space and expiring contracts are prized assets in the NBA.

All of this action is in stark contrast to what will likely happen at the NHL trade deadline on February 24. If history is any indication, teams below the playoff line will be sellers, while “contenders” will either buy to improve their teams at the margins or stand pat. NHL GMs are notoriously risk-averse, and tend to stick to that script. There will likely be no major roster shake-ups, movement of star players, or any three-team trades. And of course, Darren Dreger will tweet the terms of a deal 44 seconds after a team’s official account announces it. The NHL really knows how to entertain, eh?

How does this all apply to the Rangers? It has become increasingly clear that they need to do everything in their power to keep Chris Kreider. In order to do that, they are going to have to shake up their roster somewhat significantly due to the salary cap constraints that loom for next season (thanks, Kevin Shattenkirk buyout, and shout-out to Larry Brooks for initially ignoring the $6M cap charge on next season’s books while pitching fans on why the buyout was such a good idea last summer. Bang-up journalism there, my guy). Don’t count on Kreider re-signing here on July 1 after the Rangers trade him, either. They won’t be able to offer him the best contract and once he gets a taste of hockey outside New York, money will win out over nostalgia.

So what can the Rangers do? Obviously they’ll consider trading restricted free agents instead, namely Ryan Strome and Tony DeAngelo. The counter-argument of course is that both players are enjoying breakout seasons and won’t be easily replaced. Could Joey Keane or Nils Lundkvist fill the void left by DeAngelo, one of the most dynamic offensive-defensemen in the NHL? There’s no proof they could (especially immediately), and hope is not a strategy. In regards to Strome, center depth is hugely important, and his chemistry with Artemi Panarin cannot be ignored. Is there a ready-made Strome replacement in the system currently? I don’t see one.

There are other options, however. I’d imagine there are likely multiple teams that would be interested in Brady Skjei. Could a suddenly improved Marc Staal be moved to a Western Conference team that values playoff experience and a heavy style of play? For those of you screaming about contracts, this is where a third team could potentially enter the fray and take on a big cap hit to make the dollars work. What about including Brett Howden in a trade as a sweetener? Pavel Buchnevich (DISCLAIMER: I’m not arguing he should be traded) is another potential chip. The Rangers currently have cap space which they can use to potentially take on a contract if necessary, not to mention multiple draft picks in rounds 3 and 7 of this June’s draft.

The buyer/seller dichotomy in the NHL is a piece of conventional wisdom that the Rangers would do well to ignore. They can be both at this trade deadline. Unfortunately, as the saying goes, it takes two (in some cases, three) to tango. Even if Jeff Gorton wants to get creative, is there a willing dance partner among the other 30 NHL GMs? More likely, rival executives will keep pitching him picks and prospects because the Rangers look like sellers given their current position in the standings.

The point is this: the Rangers cannot punt on multiple seasons now, not with the clock ticking on Artemi Panarin’s prime and Mika Zibanejad’s cap-friendly contract. Letting Chris Kreider walk significantly jeopardizes the team’s playoff chances for next year, as well as any ability to legitimately compete for a Stanley Cup in two seasons (which Dave has pegged as the year the “window” truly opens; I tend to agree). Pinning too much hope on young players, and thus becoming overly reliant on them, is not a solution either.

Kreider has done his job, making this a very difficult decision for management. Now management needs to get creative in order to keep him. Good luck with that.