Prior to yesterday’s strong win against the Islanders, both Rob’s mentioned to me that the Rangers seemed to be closing gaps differently on the forecheck and in the neutral zone. I hadn’t had a chance to watch in depth until last night, so I took that opportunity to look at their forecheck and gap control.

David Quinn has the Rangers running a 2-1-2 forecheck. When Quinn first got here, it was a fairly aggressive forecheck, with F1 usually pressuring behind the net and F2 supporting close to the slot/bottom of the circle. F3 would assess the play around the blue line and pinch in right situation to cause a turnover. D1/D2 would be around the red line, but they were never really active in the forecheck.

I’m not sure if Quinn changed the forecheck to start this season or if the Rangers just weren’t executing, but it appears that the Rangers were not getting F2 in deep enough, making the forecheck look more like a 1-2-2, but way too passive in allowing speed through the neutral zone. F1 would be in the offensive zone, but F2 and F3 would be around the blue line, pushing D1 and D2 back to the red line or worse. That led to the mess we saw the first two months of the season.

From watching last night’s game, and based on what Rob and Rob noted prior, it looks like the Rangers started going back to the original 2-1-2 forecheck.

I included the end because of the chance that was created by it. pic.twitter.com/EFlkVrAJkZ

Thanks to Tom for providing the gifs I asked for.

The big change here is that F1 and F2 are both in very deep, behind the goal line. This may be a product of the loose puck, but regardless it’s still a stark change from what we’ve seen the Rangers do on the forecheck. F3 is Chytil here, and he is supporting around the slot.

Another big change is that D1 is active in the forecheck – pinching on this play to force the turnover and the chance for Chytil. This is the first time in a long time that I remember the defense being active on the forecheck.

The whole sequence led to a post by Chytil and then sustained offensive pressure for about 30 seconds. It did end with a blocked shot and subsequent rush the other way, but that was less a product of the forecheck and more a result of a blocked shot.

Here’s another sequence from last night’s game. Again F1 and F2 are in deep at the goal line and F3 is reading the play and supporting for a turnover. Previously, F2 would be where F3 was, and F3 wouldn’t even be in the picture.

Something to note here is how Tony DeAngelo and Marc Staal, the new defensemen after the change, didn’t have the chance to step up on the rush. Staal was far closer to F1 on the rush, about a stick’s distance apart at the neutral zone dot (screenshot below). That forces the pass to F2 a little behind the play. That little pressure, combined with DeAngelo’s positioning, forces the rush to the outside and then eventually behind the net. 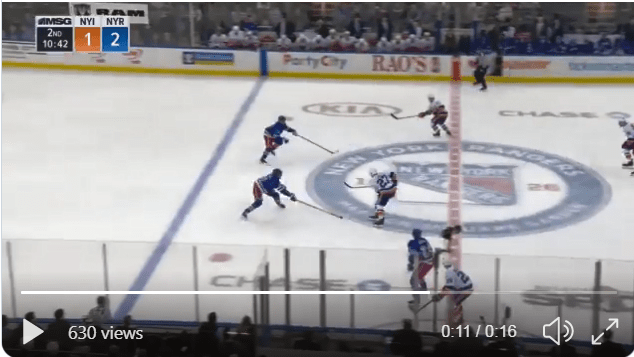 Staal’s stick check and gap control forced the Isles to slow down, and while there was still a controlled zone entry, it was a low risk entry since it was not with speed and it was forced out wide. In prior scenarios, we would see Staal and DeAngelo already at the blue line or worse. There is also support on the third man in, ensuring this isn’t an odd-man rush.

The Rangers have been much better in creating pressure off the forecheck, leading to sustained offensive chances and overall better defensive play in the neutral zone.

This is something Rob and I both illustrated in posts at the midseason mark. Rob mentioned the prior 12 games (now closer to 15) had seen a markedly improved defensive team, while I mentioned that the Rangers were trending better offensively and defensively as the season wore on. More pressure on the forecheck and better gap control in the neutral zone plays a significant role in those numbers and trends.

In the end, the jury is still out on whether this was a change in system or just a change in ability to execute a proper forecheck, more video review is needed. That said, the Rangers have been significantly better due to a more aggressive style of play. Chaos reigns supreme for the skilled teams, and the Rangers have a bunch of skill.