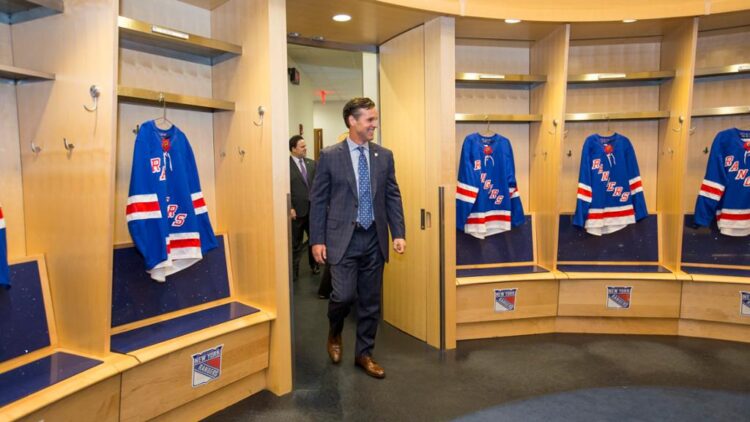 Game One is in the books, and we finally got an extended look at how David Quinn will be coaching the team. I say that fully knowing we had six preseason games, but it’s tough to gauge how a coach will run his systems when half the team is headed to the AHL. With a full game, and one that was almost entirely at even strength, in the books, we have much longer looks.

For a refresher on hockey tactics, be sure to check out our systems resources. On the forecheck, there are usually five types of forechecks:

Last night, the Rangers were primarily using a 2-1-2 forecheck, but it wasn’t nearly as aggressive as Tortorella’s version. The Rangers send F1 and F2, usually the wingers in deep, almost to the goal line, to pressure the first pass. The goal here is two fold: Create turnovers and ensure the opposition cannot break out with speed.

Here are Vesey and Zucc on the forecheck. Eventually they will be very low, by the goal line. It forces the pass at a bad angle and is aimed to break up crisp passes with speed. pic.twitter.com/zDe25H7jhJ

In the situation above, Jimmy Vesey and Mats Zuccarello are F1 and F2. Nashville has the puck behind the net, but little support for zone exits with speed. Vesey and Zuccarello know there is no support, so they can pressure more. Kevin Hayes is F3, not pictured yet. He’s at the blue line, assessing the play.

F3 is critical here. While F1 and F2 are in wreaking havoc, F3 needs to read the play and puck options. If he sees an outlet, he will need to back off and be more conservative. If he sees a potential for disruption, he will pinch in to create that turnover.

The pass isn’t clean, so Hayes cheats in to create more chaos. pic.twitter.com/eEU9Vq3J0A

In the above situation, since Nashville didn’t have any support, Hayes picked his opportunity to jump a passing lane on the outlet. The pass was deflected, and eventually got past to Nashville’s forwards at the blue line. However they had no speed, and their zone entry to the offensive zone was stopped relatively easily by the Rangers and turned back up the ice.

When F3 pinches like Hayes, there are three outcomes:

Only option 1 here is bad. It will happen a good amount, but it’s the price of aggressiveness. As players learn the system and the reads, we should see fewer odd man rushes. Since F3 doesn’t always pinch in, this isn’t going to happen as often as you might think.

In the example above, the Rangers disrupted the breakout, which in turn led to them turning the play back up the ice after the turnover at the Rangers’ blue line. I don’t recall any turnovers created by this system last night, but Nashville’s blue line group is exceptional at moving the puck.

When going up against a group like Nashville’s, ensuring they can’t break out with speed is really the best a team can hope for. That blue line can move the puck quickly, swiftly, and accurately. When the Rangers take on teams with less mobile blue lines, we will see more turnovers.

The major difference between Quinn’s 2-1-2 and Tortorella’s 2-1-2 is level of aggressiveness. In Tortorella’s system, F3 was to be at the blue line and looking to intercept the breakout pass. He ran a north/south type forecheck. In Quinn’s, F3 has a little more freedom to pick his spots. That’s where the conservative aspect of the system becomes apparent. It’s a nice twist on an otherwise standard system.