Before the season began, Filip Chytil was pencilled in by many as the 2C to start the season. That was all thrown to the wind when Chytil didn’t have a strong camp and was sent to the AHL to start the season. After putting up 3-6-9 in nine AHL games, Chytil was back up with the Rangers. The question was whether or not he would stick. One week after writing about how we should be appreciating Pavel Buchnevich, we continue the optimism and progress by appreciating what Chytil has done to ensure he sticks.

After 17 games, Chytil has a line of 8-2-10 and has solidified his role in the top-nine for now*. Chytil really clicked with Chris Kreider and Pavel Buchnevich when that trio was a thing. Chytil’s scoring isn’t a product of powerplay time either, as all of his points are at even strength. His 40 shots through 17 games is solid on a team that doesn’t shoot that much as well

*-As long as Ryan Strome produces with Artemi Panarin, there’s no reason to split up that duo.

The one item to keep an eye on is his shooting percentage (20%), something that will likely come down. But like with Strome, a shooting percentage that regresses is fine as long as the offensive numbers are still there to whether that storm. And that is where we truly get to see Chytil’s improvement, as he’s one of the top offensive drivers on the team (numbers from NaturalStatTrick), small sample size warning:

The most promising thing here is that –and I stress that this is relative to the team and not overall great numbers, and that the Blueshirts’ defensive numbers are awful all around– Chytil’s defensive numbers are pretty solid for being a member of the Rangers. His xGA/60 is 2.5, second to just Jesper Fast. His CA/60 is 58.15, also second to Fast. Relatively speaking, that’s pretty solid. 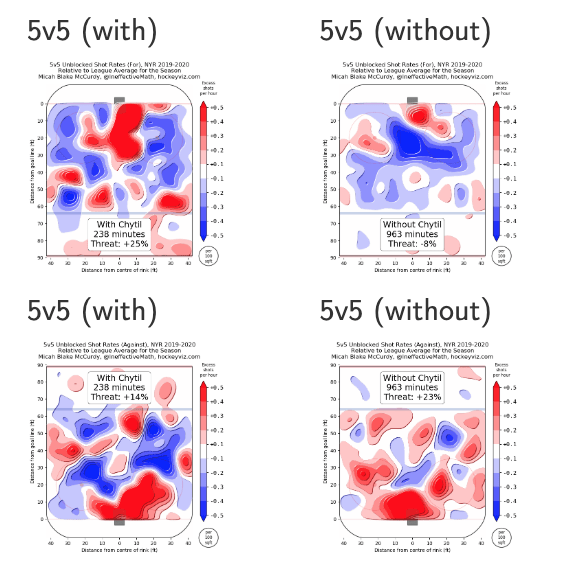 Nothing on these shot heatmaps should be surprising given the information above, but they drive home how much better the Rangers are with Chytil on the ice than without. The top half shows more red in the middle of the ice (more shots from that location for the Rangers) when he’s on the ice. The defensive heatmap isn’t overly pretty –it’s the Rangers’ effect– but it’s more blue than without him on the ice. 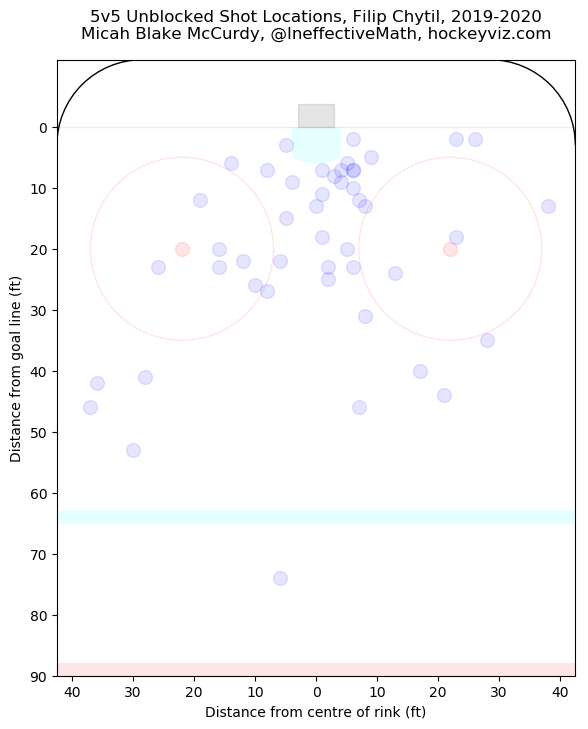 One last item to notice is where Chytil is getting his shots from, which also may be why his SH% is inflated right now. These are high quality shots from dangerous areas on the ice. The Rangers don’t shoot much, but they have enough skill to keep the offense and goals flowing.

Chytil certainly didn’t have the best camp, but he took his cut in stride and turned it into a very successful 17 games so far. He’s already shown he’s going to stick. Now it’s a matter of sustainability, and ensuring he’s not a flash in the pan. Given his skill set, I’m not concerned.