In a train wreck and roller coaster ride of a season, one of the few steady positives on offense had been a source of division since he arrived in New York. Pavel Buchnevich, he of high skill yet mediocre results through now, has found a nice home with Chris Kreider and one of Filip Chytil or Mika Zibanejad as his center. His 4-14-18 line through 22 games puts him on pace for 15-52-67, which would shatter his career high in points. Worth noting that the majority of his points are at even strength as well. 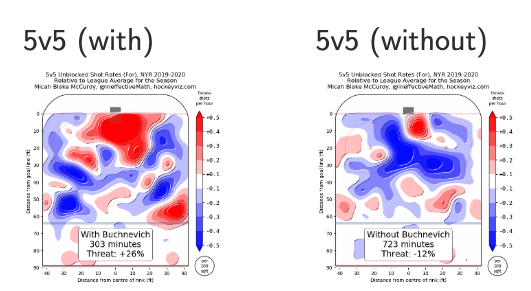 The Rangers are a far better team offensively with Buchnevich on the ice. That clump of red is right where Buchnevich should be on the ice, and it turns into a blue glob of nothingness when he’s off the ice. Of course I’m not really telling you anything you didn’t already know. 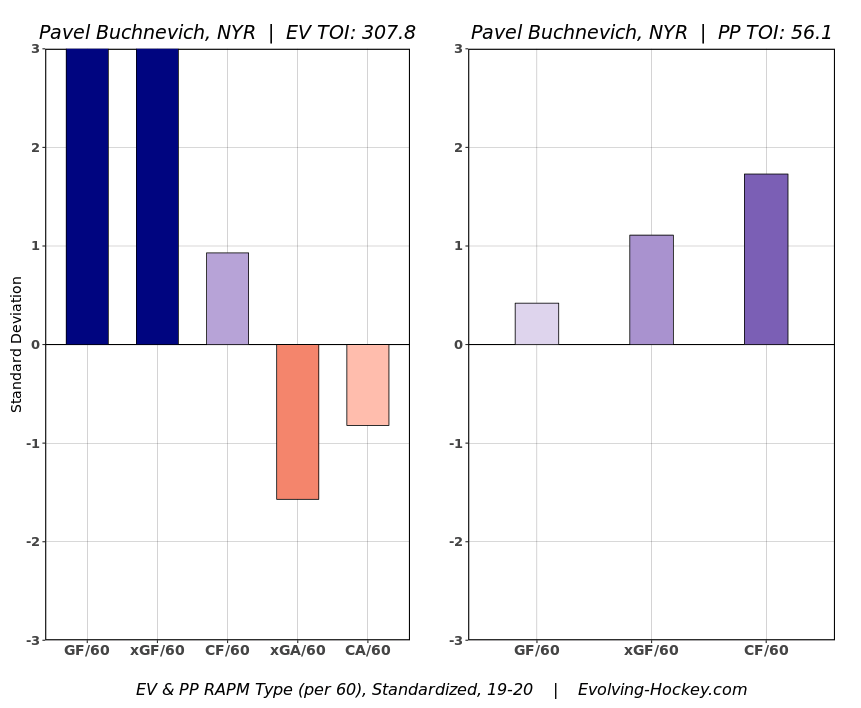 Here’s something you might not have known though: Buchnevich is off the charts good offensively. Plus he’s actually decent –comparatively to this defensive disaster that is the Rangers– defensively as well. Let’s just take a quick run through the full numbers and his team rank (min: 100 minutes):

Funny enough, he ranks ahead of Artemi Panarin in a lot of these categories. That’s not to say he’s better than Panarin, he’s not, just something that was funny. Buchnevich has his own skill sets, and while he’s not the elite talent of Panarin, he’s generating his own offense and making his teammates better too. When looking for scoring depth to round out your top-six, this is exactly what you want to see.

I don’t have video queued up to show how Buchnevich has been making his teammates better, as I stopped making gifs a while ago, but the 14 assists are surely a way of showing this.

But where are the goal, you may ask?

Those finding a reason to complain about Buchnevich thus far this year have pointed to this, as he only has four goals and is on pace for 15 goals, short of the 20 he scored last season. It’s pretty simple actually, Buchnevich was never a shooter. His season high in SOG is 136, and he’s on pace for 134 this season. Last year he actually shot less (119 SOG) but shot at a 17.6% rate. He’s shooting at 11.1% this year, thus fewer goals. SH% regression does happen folks, even if it doesn’t necessarily happen right away (see: Grabner, Michael; Strome, Ryan).

Buchnevich is enjoying a career year pace with steady and consistent top-six time and free space to be creative in the offensive zone. With Mika Zibanejad back in the lineup, Buchnevich should continue to see his assist numbers climb. He needed to take the next step this season, and he has answered the call.