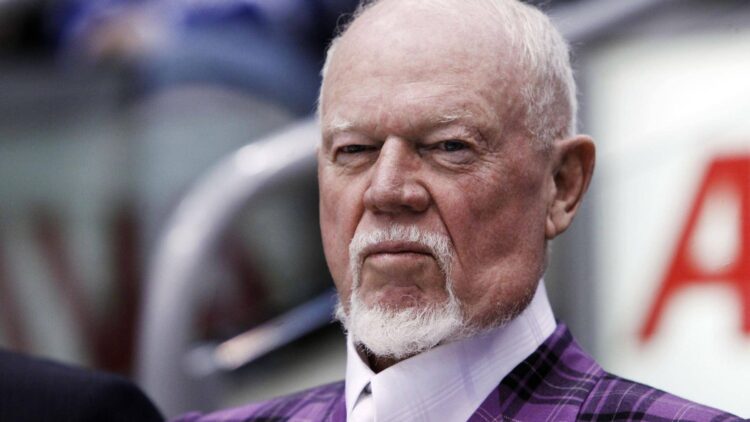 Last Monday, the Canadian Broadcasting Corporation (CBC) made the long overdue decision to fire iconic analyst and awful suit enthusiast Don Cherry.  The firing came in response to (the latest) hateful and bigoted comments about immigrants on his Coach’s Corner segment on Hockey Night in Canada.   Cherry’s full quote:

You people… love our way of life, love our milk and honey. At least you could pay a couple of bucks for poppies or something like that. These guys paid for your way of life that you enjoy in Canada.”

For those who have followed Cherry’s career, or hell, for those who have been conscious of his presence in the sport know that this statement, as reprehensible as it is, is hardly the worst thing that Cherry has ever said.  He doesn’t specifically name any ethic group or immigrant status, but the intention of the statement was abundantly clear.

For anyone else, these types of comments would have been career ending in almost any other context, but in this case it’s much more difficult given Cherry’s cult-status in the hockey community.

As a white kid growing up in upstate New York, with a relatively conservative family, I was your prototypical demographic of an American hockey player.  My friends and I considered Don Cherry to be an irreplaceable part of hockey culture; I owned volumes 1-8,000 of Rock‘em Sock‘em Hockey and nothing could get you ready for some highlight videos like Cherry’s signature “Let’s Go!” and his trusty English Bull Terrier, Blue.

Cherry’s boisterous personality and passion for the game was influential for a generation of young hockey players.  He loved players who looked and played and talked the way we did. He echoed the same sentiments of hard work and standing up for your teammates as our coaches did.  His message was tailor made for hockey’s culture and the development of young, white, North American hockey players.  The trouble was, at the time, we didn’t realize that his message was for us, to the exclusion of everyone else. To this day, I’m still grappling with the socio-political implications of the bubble that I grew up in and the cancerous lack of empathy it fosters. This, for me, is understanding what white privilege actually means.

Two weeks ago, Pat wrote a thoughtful post on the challenge of “sticking to sports” in our society today.   I’ve been thinking a lot about that piece lately, and the implications of the attempt to compartmentalize our interests in the light of increasingly toxic and inescapable political circumstances in the US and Canada in the era of Donald Trump.

Many of the comments I saw in response to that post were basically the sentiment that people don’t come here to read about politics, they come here for analyses of the on-ice product of the New York Rangers.  Therein lies the challenge.  The reality of the situation is that politics have always been a significant part of sports, especially hockey. The issue coming to a head now is that they have predominantly been conservative politics.

Think about it for a minute.  National anthems, military appreciation nights, ceremonies honoring police officers, the inherent nationalism of international competition, the “good Canadian boy” culture.  These are all inherently political statements, as innocuous as they may seem to some.  Now, there is obviously nothing wrong with supporting these institutions, in a vacuum.  This is especially easy for me, as a white male, to say sitting here spilling digital ink about one of the whitest, male-est sports in the world.

This isn’t about me, though. This is about other people.  The people Don Cherry viciously maligns.   Women.  People of color.  LGBTQ+ people.  Immigrants. Hell, even western Europeans. The notion that you might have a real-life, nuanced and personal reason for not lining up to show blind support for military policy, interventionism or supporting law enforcement is so uniquely offensive that it can ruin the experience of the sport for some.  That is how deeply engrained conservative thought is in hockey.  You have one “Pride Night” in a non-traditional hockey market and you would think that the Stanley Cup was being lit on fire at center ice at Maple Leaf Gardens.

Take a look at Bobby Orr’s response to Cherry’s firing:

This guy is the most generous and caring guy that I know, and what they’ve done to him up there is disgraceful,” “It’s a new world, I guess. The freedom of speech doesn’t matter. “

Touching again on Pat’s article regarding free speech, I continue to find it both perplexing and maddening at the same time.  The freedom of speech provides protection from being silenced by state actors (government agencies).   It in no way protects you from being mocked, ridiculed, de-platformed by private organizations or, most importantly, from being fired from your job.

You are accountable for your actions and when you spew deliberately bigoted and harmful rhetoric, you cannot just hide behind “free speech” and expect it to all end well.  In the age of social media and instant content consumption, there is a heightened expectation of “think before you speak”, because the consequences can be severe.

Don Cherry and most of the hockey world refuses to accept the evolving reality of the game.  It’s a global game now, with women, LGBTQ+ people, people of color and god forbid, immigrants playing the game at high levels and de-emphasizing fighting and some of the other “pillars” of the sport that people like Cherry hold in such high regard.  This is the reality now, and it happened on its own.   There was no globalist conspiracy.  The game grew into what it is today naturally and in spite of active desire from the power structure to keep the game as regressive and white as possible.

I know there are people out there who’s response to this article will be “look, I’m not a racist or a sexist or anything like that, I’m just old school/conservative/whatever and would prefer things be a certain way or don’t like the direction things are going”,  but what you have to understand is that to believe in that perspective, whether willfully or not, you are giving oxygen to a political and social movement that seeks to deny basic human rights to entire groups of people and to silence those advocating for meaningful change.  If you don’t believe change is necessary or beneficial in this context, you have not made a meaningful effort to understand how these policies and cultural institutions have harmed other people.

This is the legacy that Don Cherry leaves behind.  He was and continues to be a racist fossil in a ridiculous suit who could not look past his own hatred to see what the game had become and embrace what now makes it great.  If the age of Donald Trump has taught us one thing, it is that we are at a crossroads in both society and sports, and the historically maligned and silenced aren’t going to continue to be.  We must continue to fight for this kind of progress.

The difference now is when these things come to a head, the true feelings of people like Cherry are unveiled for the world to see, and people actually care.  He learned (or hasn’t) that the denial of peoples’ right to exist or participate will not be tolerated in modern society, and his regressive views will hopefully be relegated to fringe-ideologue status, because those views hold no place in a civilized society.  Don Cherry got exactly what he deserved, it’s just a shame it took this long.