On Enforcers: The Unsurprising Inclusion of Micheal Haley 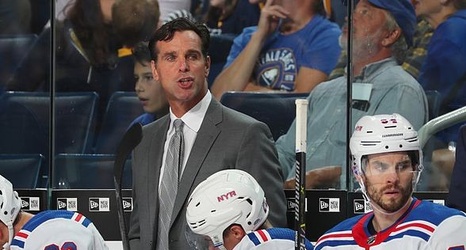 When the Rangers unveiled their final cuts and 22-man opening night roster yesterday, #NYR Twitter had a (predictable) meltdown. A lot of consternation centered on the selection of Brett Howden over Filip Chytil, as well as the decision to send Vitali Kravtsov to Hartford. One addition that momentarily flew under the radar (and curiously, one that the Rangers did not mention in any official announcements) was the inclusion of Micheal Haley.

Both David Quinn and Jeff Gorton launched into familiar refrains during their press conferences when asked about the bruising forward. I’m paraphrasing here, but they both mentioned the tough, heavy competition in the Metropolitan division (“Look at what happened the other night,” said Quinn, referring to Matt Martin and Cal Clutterbuck’s headhunting expedition in Bridgeport), as well as the fact that Haley brings a different element to the team; something “we don’t have a lot of.”

So it seems as though the more things change, the more they stay the same.  For my entire life as a fan – I remember things pretty clearly going back to the 1993-94 season – the Rangers have almost always dressed an enforcer-type.  Here’s a (probably incomplete) list, starting with two players were part of that glorious championship team.

The Rangers are not alone. Most teams in the NHL find space on their rosters for at least one or two players like those mentioned above. Haley himself was most recently a member of the Sharks, and appeared in 11 playoff games last year.  The Sharks were a really good team that could’ve easily won the Stanley Cup. Trust me when I tell you that Micheal Haley was not the reason they didn’t.

What’s plain to see is that the Rangers still value this type of player, regardless of who runs the front office. A lot of people attributed the signings of players like Orr, Brashear and Boogaard to Glen Sather specifically, and there was a thought that once Sather was gone, the Rangers would permanently wave goodbye to enforcers. For better or worse, it seems as though John Davidson has the same space in his heart for players who are better known for fists and forearms than goals and assists.

What’s important to remember here is context. It’s October. The Rangers are rebuilding. They are an extremely young team, even with Chytil and Kravtsov in the minors. The roster will change as the year progresses.

Most crucially however is the fact that Haley is not blocking the development of any of the Rangers prospects.  Unlike Alain Vigneault, David Quinn is a coach who heavily apportions ice time to his top nine forwards and top four defensemen.  The fourth line rarely sees more than 6-7 minutes in a game.  Jeff Gorton said explicitly yesterday that players like Chytil and Kravtsov will be better served by playing big minutes in all situations in Hartford. He’s right.

Lastly, even if the Rangers were in a position to contend this season, having a player like Haley on the roster would not be a death knell to their chances. It has been proven that hockey is a strong link game, meaning that the quality of the players at the top of a team’s roster has more impact on success or failure than the guys at the bottom. It’s why Sidney Crosby, Alex Ovechkin and Patrick Kane have all won Stanley Cups (Kane most recently on a team that famously lacked depth at forward and had about 2.5 functioning defensemen as well). Yes, depth absolutely matters, but the Rangers future success hinges on Kaapo Kakko fulfilling his potential, Artemi Panarin finding another level, and a few more prospects exceeding expectations in the next season or two.

Am I fan of the Haley signing? Absolutely not. Is it something to panic over, something seriously jeopardizes anything about the Rangers plans this season? No way.