Can a kid force Marc Staal out of the Rangers lineup? 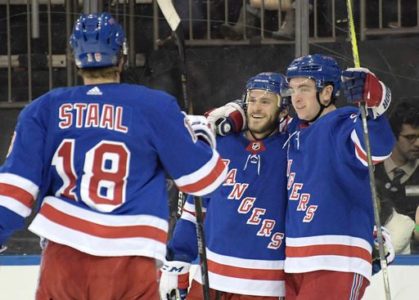 One of the more interesting battles heading into camp is that of left defense. It’s safe to say that Brady Skjei will get the 1LD minutes, likely with Jacob Trouba. After that, we have no idea how the rest of the lineup will shake out. Brendan Smith, who was pretty serviceable as a bottom-four defenseman, is in the mix, as is Marc Staal as the veterans. Kids Libor Hajek (who looked good in 5 NHL games), Yegor Rykov, and Ryan Lindgren also look like they are in the mix.

Let’s assume for a second that Skjei and Staal are locks, and the battle is really between Smith, Hajek, Rykov, and Lindgren for the final spot and 7D role. Let’s also assume that there is no way a kid is going to get the 7D spot. That basically means Hajek, Rykov, and Lindgren are battling for 3LD, while Smith is penciled in as the 7D. I’m not sure how that works with the cap, but humor me.

But what if all three of Hajek, Rykov, and Lindgren show they belong in the NHL? I doubt it would happen to start the season, but what about later on? It’s certainly not out of the realm of possibility. Staal hasn’t been good in almost five years now, even to the point where Smith is better than him. Would David Quinn do the unthinkable – scratch Staal in favor of the kids?

This isn’t something I expect to happen right away, so this is more of a midseason hypothetical than an October hypothetical. Staal’s no-movement clause certainly complicates things, as does his basically unmoveable contract cap hit/dollar amount. He’s going to be with the Blueshirts, it’s just a matter of if he plays or not.

In the end, this is not likely to happen. Too many things need to happen for Staal to be forced out of the lineup, and it’s not like the Rangers are going to rush their prospects this season, another (likely) out of the playoffs year. Injuries certainly change things, but that is likely the only thing that can happen to force Staal out of the lineup.

I’m oddly ok with this, actually. This is a rebuilding year for the Rangers, so there is no immediate need to be good. Staal can eat minutes, albeit poorly, while prospects develop in Hartford and/or in lesser roles with the Rangers. This isn’t the year to compete. Next year and beyond is.