What’s The Worst That Could Happen – Avoiding the big mistake 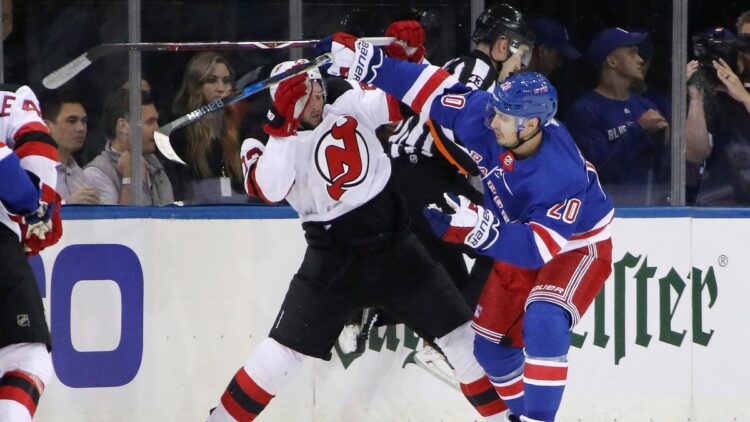 This is round three (Part 1, Part 2) of a little grouping of bad time kind of situations we’ll hopefully avoid as this rebuild goes on, things that I think are worth humoring as absolute worst-case scenarios. The other ones have had long introductions, but this one is quite simple. The year is 2022, our faces are painted, we’re a bit character on funny TV show. That’s right “WE’RE THE DEVILSSS.”

To put it in blunt terms, the Devils are the team we don’t want to be. They’ve given out bad contracts, made bad trades (with the exception of one gigantic roster heist) and selected bad draft picks. It’s really a cautionary tale of what not to do, but here’s the thing: it’s easily avoidable given where we were, where we are, and where we’re already going.

Looking at the Devils’s CapFriendly page first, we’ve got a few big contracts for bad to mediocre players. Travis Zajac is at $5.75m until the end of 2021 (compare, if you will the Mika Zibanejad contract), Kyle Palmieri is on a $4.65m deal until the end of 2021 as well (this situation is roughly analogous to Chris Kreider’s but we can revisit that in a minute), and Cory Schneider is making $6m until 2022 (obviously Lundqvist is the comparison here, but I’m going to spoil the ending for you really quick and say that Hank is better). Those are probably the big three members of their veteran core, defense aside (that’s going to be its own point of analysis), and I don’t think it’s a huge stretch to say that the Rangers have the edge here. Both teams are, of course, bad. Only one of them realizes it though, and if we take our seasoned talents into the future with us I’d much rather Zibby over Zajac, Chris over Kyle, and the King over whatever-Schneider’s-nickname-is.

The large print giveth and the small print taketh away however, so the lower-on-the-depth-chart players are important to look at as well. To that end, without Hall in the lineup of course (although even he’s having a down season, so that’s worth noting), the Devils’s lines look like this and the Rangers’s like this. Both look pretty bad, but plug in Vitali Kravtsov and that shifts the Blueshirts lines a bit, and it’s worth considering that our bad players are in many ways bad right now, while theirs are somewhat lacking in promise.

For the prospects, look at Chytil’s AHL scoring, Kravtsov’s in the KHL, Andersson’s somewhat-stunted-but-still-just-fine production from his SHL days on, and then remember we’ve got guys like Namestnikov and Buchnevich who can move up and down the lineup effectively. Then compare to guys like Quenneville, Zacha, and Anderson. The Devils have Nico Hischier of course, but what are the odds he hits his ceiling and say, Chytil, doesn’t? What are the odds they both wind up in the same place eventually? What if the former’s team flounders and the latter’s doesn’t? Lot of questions to be answered, but I’m willing to roll the dice here. Look, on this front we’re going to see a ton of shifts on both sides of the Hudson due to expiring contracts and potential trades, but I’m willing to bet that the Rangers’s front office window plants bloom and the Devils’s don’t. Just a gut feeling, but I suppose we’ll just have to wait and see.

Draft history is interesting here, as the Devils have arguably had the better odds. That’s kind of the worst case scenario aspect of it though, because they’ve wound up roughly where we are despite having plenty more opportunity to nail it. The Rangers didn’t have an excellent 2016 position compared to the Devils at the draft, but Los Diablos wound up with Michael McLeod, Nathan Bastian, Joey Anderson, and most notably Jesper Bratt while the Rangers welcomed Sean Day, Ty Ronning, Gabriel Fontaine, Tarmo Reunanen, and Tim Gettinger into the family.

The 2017 draft begins an effort by both teams to build through the draft, and the Devils obviously had the first overall pick that they used on Hischier, their only player from that draft to play any NHL games yet. On the flip side, the Rangers have already got Chytil and Andersson in the Show, and while Nico’s ceiling is probably higher than both of our baby Blueshirts, the likelihood that our guys and their guy wind up roughly in the same place is significant enough that I’ll take those odds.

It’s 2018 where we really pull out ahead of NJ, based on sheer volume of picks. We all know of course who NYR took, but it’s worth repeating: Vitali Kravtsov, K’Andre Miller, and Nils Lundkvist. The Devils picked up Ty Smith in the first round, and although he won’t be a bad player by any means (plenty of people like him well enough), I suspect in a few weeks we’ll have seen enough of Kravtsov to feel confident in our selection at 9, and in a few years those other two guys won’t seem so bad either.

This year is where it gets sticky. Due to the Devils being bad, they’re currently slated to pick fourth, while the Rangers are set to go eighth. That’ll be the Devils’s only pick, provided they don’t make a trade, and then they have three seconds, a two thirds, and one each in the subsequent rounds. On the other hand, the Rangers have one conditional and one regular first, two conditional and one regular second, and then one each in every latter round. This might not be our year folks, and we kind of need it to be.

Outside of all that we’ve got trades: the Devils got Taylor Hall, sure. But their next biggest trades have been Marcus Johanssen’s coming and going, and giving up assets for Michael Grabner, which turned out badly. We’re all familiar with the Jeff Gorton’s trades, but the big thing to remember is that we’ve gotten back quantity, and we’re in the process of growing quality. JG has made the right moves and restocked the farm after years of draining it in fairly quick time, because unlike the Devils’ perspective of wanting-to-go-for-it-but-ok-we’re-bad, the Rangers’s front office made the decision to be upfront about starting over.

We’ve got reason to believe that Chytil, Andersson, Kravtsov, Miller, Lundkvist, and Shestyorkin will be real-deal NHLers, in addition to Hajek, Rykov, Howden, Strome, Namestnikov, DeAngelo, and the aforementioned veteran core to compliment them as they grow older. If even a few of those guys hit, you can easily fill in the rest of the lineup with late round picks who turn into serviceable depth guys, or lower-key summer free agency signings who may just turn into Michael Grabner again.

We’ve got every reason to believe also that Gorton recognizes the need for a game-breaker, and that he’ll either trade high at the draft and make the smart move, or he’ll cook up a real-steal trade to match the Hall haul. We’ve got both quantity and quality on our side, and the future is looking bright as a result. I’m not sure I can say the same for the Devils. Shame.

The Devils represent a cautionary tale, deciding to go for it when the team wasn’t necessarily ready. The biggest danger is turning into an irrelevant, middling team, and that appears to be in the rearview window. We’ve already set up a brighter future than the one that’s already developed for the Devils, and even if they lay on the gas pedal we’re going to go further with what we’ve got. They’ve been rebuilding since 2012, ours is … well, I think I’ve made myself clear.