What’s The Worst That Could Happen – The Goalies 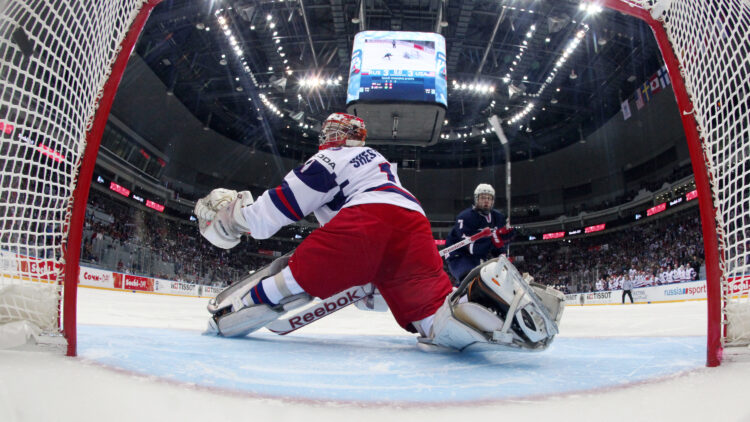 This is the first in a series, and I’m going to introduce it thusly: if you know me at all you’ll know I’m a dopey optimist who thinks every prospect could be someone special. I’m still waiting for Ryan Graves to become our next big-slapper defenseman, for example, but now I’m going to be trying on a different hat. We’re looking at worst-case scenarios, and how they might derail this still-early rebuild. None of this is to say that things will disintegrate if it all takes a turn for the worse, but it’s worth looking I think at just what might happen if Ryan Graves doesn’t turn out to be the next 100 mph shot defenseman to take the league by storm (he’s still in the system right? no?).

What if Igor Shestyorkin, widely considered to be the heir apparent to the throne, blows out his knee completely on some freak accident in practice? Well folks, that’d be bad. To me at least, goaltending is voodoo, but not exactly like that.

Goaltending is voodoo as far as acquiring it and making good contractual decisions, because while the market behaves like it typically does for any other position, it’s incredibly difficult to account for aging curves and year-to-year performance. Sure, that huge contract might seem reasonable when your guy is putting up an excellent save percentage over the course of a full season or even two, but what happens when you give out the big one and then he falls apart a la Cory Schneider? Well I’m here to tell you that this issue is fraught enough with homegrown, team-controlled goalies, but Gord save us if we have to go out onto the trade market (stupid, but not terrible) or into UFA (please no). Henrik Lundqvist, it’s important to remember, is a major, major outlier in terms of performance and contractual ease, and even then that one is still a doozy. Imagine if he were bad a couple of those years?

Here’s the good news – Hank is still healthy and can probably keep doing the damn thing even after this contract expires, surely on a reduced workload, but probably still better than league average (Marty Brodeur he is not – despite lacking in the wins column compared to his one-time cross-Hudson rival, he is a much better goalie, by a wide mile).

The other good news is that we don’t have one but two Russian goaltending phenoms, along with perhaps the best goaltending coach there is (Mitch Korn and Bob Mason being the only two other ones who strike me as even close, mostly due to their ability to take relatively standard goaltending skillsets and turn their mentees into legitimately forceful NHL starting netminers, but this is totally based on my own anecdotal perception).

All of this speaks to the notion that actually the Rangers might be in a solid spot for the net-protecting future, but there’s an important subtext here: the Rangers will likely find themselves unable to retain all three of Lundqvist, Shestyorkin, and Georgiev, unless Gorton makes some clever maneuvers. As of right now the Lundqvist deal – which we need to remember is sub-market value at this point, or at the very least exactly what he would make were he to hit UFA this year – $8.5m until the end of the 2020-21 season. Georgiev is making $792k until the end of next season.

Shestyorkin’s entry-level deal is a minor monkey wrench, or at least traffic cone in Jeff Gorton’s driver’s test of becoming a more-than-just-good GM. The young Russian is not entirely young at the age of 23, which has important CBA implications. Under the current labor-ownership agreement, players 22-23 in age can sign at a maximum of 2 years for their first deal in the Show, and at 24 it becomes a one-year max (Shestyorkin’s birthday is December 30th, which is the one kernel of good news in that it means the Rangers have anywhere from now until the middle of next season to put him under team control for a full two seasons). At the absolute upper limit is the performance-bonus-laden $2.85m ceiling for ELCs, meaning if the Rangers wanted to carry three goalies from 2021-2022, when Hank’s current deal expires and he’s 39, until the King retires, it’s going to require a lot of wiggling. How might that work?

So, to start things off let’s nail down the contractual loci of each of the guys who might split a season three ways and still win a Stanley Cup (here’s to hoping, but I’m again, very optimistic). Hank will be coming off a UFA, and you better believe he’s retiring a Ranger. Shestyorkin, if he signs his ELC next year, will be coming off of it due to the two-year limit, and Georgiev, because his contract is up at the end of the next NHL campaign, will already be on his next contract, if he isn’t traded prior.

You never want to spend too too much money on goaltending if you want to contend, and the Rangers’ likely interest in top UFAs will potentially clog things up even more. In a perfect world, they play it cool and only make big splashes when necessary, instead of attempting to come out of this rebuild prematurely, but we need to entertain the possibility that this team may be top-heavy, with one or two massive allocations of cap space and then a lot of subsidization further down the depth chart.

For the sake of keeping things even, let’s put a hard $10 million dollar cap on the amount of money spent on goaltending in the years of Henrik’s farewell tour. This will honestly be around or below league average by the time the cap is at its height in the coming years, but that’s honestly a steal, because just imagine an aging all-timer with a pair of hotshot youngsters (who have been nurtured and mentored by the aforementioned goaltending guru and His Majesty to boot) backing him up and keeping everyone at a fresh ~27 game workload.

For this whole thing to work there needs to be consensus though, some serious buy-in. What has to happen, unless you’re pulling some totally out-of-touch communication nonsense, is sit down your first ballot hall-of-famer, early-career starter, and potentially elite talent, and explain to them the plan. Make it in depth, be upfront about the odds given what stage the rebuild is in, and take feedback. Obviously Henrik has the authoritative voice on the matter as the only guy in the organization behind the GM on the pecking order –let’s be honest, if a coach can get fired at his word, it’s Dolan and Sather, then Gorton, then Lundqvist, everyone else be damned– but goaltending has been a pillar for the Rangers. The special quality of a young team with a helpful salary cap setup is such that everybody needs to be in the loop and on the same page. An elongated contract standoff with Georgiev and/or Shestyorkin would really pose a problem for the Rangers, and force a scenario none of us want.

That’d be trading the wrong one of course. Having Hank around still will be a good half-tandem, but we need to make sure we’ve essentially got a 1A/1B situation, because he’s not going to be able to carry the team much longer as he ages. Similarly, Georgiev, unless he really exceeds expectations, is not going to be able to carry the team on the level that Lundqvist has in years past, ditto for Shestyorkin. Obviously we’re hoping to have a team that’s more than just goaltending by then and won’t make life unbelievably hard for whichever masked hero is between the irons. But if and when we need goaltending, we’re going to really need it. Teams whose goalies can steal games in the playoffs, totally shut down the opposition, and provide a bedrock upon which to build contention are the kinds we remember, and if we want to go beyond just a middling club as we traverse the next decade that’s a must. If we can’t do that with a conveniently managed triumvirate, and it’s just going to be two guys and some other guys in front of them, then we’d better not trade the wrong one. Think back to Halak and Price in Montreal, and now imagine the Habs traded Price instead. Yeesh.

If we just have two goalies, that’s great, and honestly that’s all we’ll need unless we trade the one who goes on to be a superstar and retain the guy who turns out to be Mike Smith, but let’s make this work with three, yeah? Hank is obviously going to be the biggest money contract regardless, but if he’s still feeling like he can play I’d give him anywhere from $4-6m on single-year deals, and then allot the rest first for Georgiev’s bridge deal, because it’s going to have to be a bridge deal, at around $2-3m. This’ll be tough though, because he’s going to want a big raise given his current salary. Shestyorkin might want the big ELC, not the little one. Still, since Georgiev’s deal comes up first we’ve got some space as far as setting up the cross-ice pass as it were.

Let’s say Georgiev signs a 2x$2m deal at the end of next season, overlapping for one year with Hank, and putting us at $10.5. At that point, you bury Shestyorkin in Hartford for a full year. Then, the next season, if you can get Hank on a one or two-year deal, again, in the $5m ballpark, Shestyorkin can get a call-up provided it’s in the best interests of the team (this is a huge “if” that needs to be considered at all points in this entire thought process, and rebuild more broadly) and even if he’s at the max ELC deal then we’ve got right around that $10m mark for goaltending.

What if it gets stickier than that in negotiations and not everyone is on board?

Then we’ve got a problem on our hands, and may wind up being forced into either a trade situation as mentioned earlier, or the kind of thing where Gorton just sort of punts further and further down the road. It’s certainly a delicate situation, but personally I think it might just all work out. That’s the point of this whole exercise: we can look at worst case scenarios and see a silver lining, or find that our happy problems are less problems and more happy.