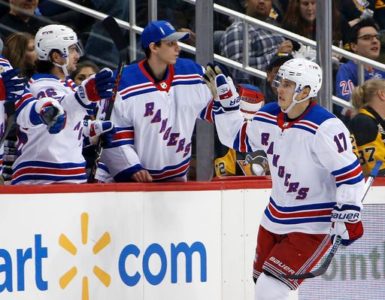 Continuing the midterm grades for the Rangers, we are going to tackle the bottom-six forwards. Since David Quinn likes to rotate his lines a lot, and since the Rangers have had a bunch of injuries that have skewed the ice time, I’m going to use best judgment on what is considered a bottom-six forward.

Thirteen forwards have played at least 200 minutes for the Rangers thus far, and I’m going to use that as the cutoff. In doing so, players like Matt Beleskey, Ryan Spooner, Vinni Lettieri, and Boo Nieves don’t make the cut. Let’s call Lettieri and Nieves incomplete grades, and give Spooner/Beleskey N/As. Ok? Ok.

Re-signing McLeod was relatively silly, and the results are what we expected. He fights, and that’s about it. There’s more to hockey than this. Maybe a playoff team wants some toughness? Grade: D

Howden lit the world on fire with his start to the season. A surprising pick to break camp, Howden put up a line of 4-8-12 in the Blueshirts’ first 22 games. He was outperforming more highly touted prospects like Filip Chytil and Pavel Buchnevich. However the magic faded quickly, with Howden putting up just three assists since 11/24, a stretch of 25 games. This is his first NHL season, so not only are the NHL rigors probably getting to him, but holes in his game are exposed faster (his -12.22 relative xGF% is worst on the team). The fatigue is a reason why he wasn’t sent to the AHL to continue playing during the long break. But still, this is more than we had expected from Howden. Grade: B

Utility man extraordinaire, Fast has his usual self this year. He does all the little things well, chips in here and there offensively, and can play anywhere from the top-six to the fourth line. He’s been mostly a middle-six player this year, and his willingness to go to the corners and do the dirty work makes him mesh with most other duos. He’s up there in relative xGF%, at the top of the non-Hayes/Kreider division on the club with a 5.30 rel xGF%. He’s one of those complementary players that you want on your team. Grade: A-

Namestnikov survived the evaluation period, with Ryan Spooner being sent to Edmonton. Namestnikov has had flashes of brilliance –his 1-2-3 line against Anaheim being the standout flash– but has also had long periods of invisibility. Grading the forwards is very difficult, because the team as a whole is horribad. He’s been middle of the road. Grade: C

I had to double check that stat line when I first saw it. Before Mats Zuccarello’s scoring streak before the break, Vesey was fourth on the team in scoring. He now sits fifth, and despite his poor relative stats (-3.74 rel xGF%), still manages to score. Vesey is an enigma, and another case of poor underlyings that are overlooked because he scores. It’s tough to really grade a player like this. I still think he makes great trade bait, but he is the only player aside from Fast that appears to be willing to do the little things in the corners. Grade: B-

Let’s all give a round of applause to Jeff Gorton for turning Spooner into Strome. Spooner was useless, and Strome is useful. He’s been a pleasant surprise thus far, and has certainly earned a spot in the bottom-six. He’s outplayed a bunch of guys on this list already, and is on a higher points-per-game (with the Rangers, at least) rate than Vesey, Namestnikov, Howden, and Fast. It’s only been 29 games, but Strome may have found a spot on the bottom-six. Let’s see if he can keep it up. Grade: A-

Andersson had an extended look, and quite honestly didn’t do much with it. As Ricky Milliner pointed out, he needs to work on his game away from the puck. I’d expect to see him back up after the deadline. There’s no rush, and he’s still very young. Grade: INC