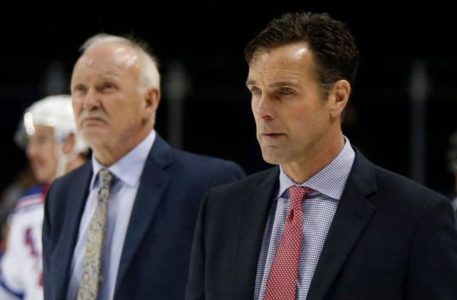 Look, a lot of internet ink has been spilled in the last 24-48 hours as to how bad the New York Rangers are. The better Rob hit it pretty square on the head on Monday regarding the Rangers signal (rebuilding) and then subsequent actions (let’s waste roster space). I’m not here to say anything radically new, but just provide another thought process to consider, especially while we all watch this franchise try to transform itself back into something it was so close to only about five years ago.

The reason I post the above is not to go on a long rant about how shots mean everything (they don’t, of course), but just to give perspective. Anyone else remember the late 90’s and early 2000’s? Six straight mediocre years from 1998 to 2004 finishing fourth in the Atlantic; stuck in the middle due to NYR having the financial ability to purchase free agents, but not actually getting top-end or proper depth talent (or a long-term plan for goaltending) to create a complete NHL hockey team. Shots per game has gone up by four for each team every night, sure, but this year is some of the worst team defensive efforts NYR has seen in twenty years. The only saving grace was that the Rangers managed to hit on some of their mid-round picks during the latter end of those years, and they stumbled upon Lundqvist in 2000.

There has been and will be plenty of analysis as to why they’re so bad, but honestly, I blame no one for not getting riled up on a daily basis after fifteen years of moderate success, with three or four of those years being legitimate Stanley Cup Contenders. That being said, I tweeted this out midway through the Coyotes game:

Last bit on #NYR and then I’m done for the day. The only reason I will continue to care about lineup optimization is because I’d like to see if Quinn recognizes the obvious good and bad, especially in a season where new/wild ideas should be tried. So far, I’m not enthused.

While the trades and moves are coming, and dear lord please bring them soon, the fact of the matter is the Rangers didn’t hire Quinn just to fire him anytime soon (Ruff can be the fall man though!). Therefore, Quinn’s lineup decisions, in-game deployment, and overall management (and eventual feedback to the Front Office) have weight. This is where the perceptions matter, because as a result of choosing to do certain things that he must somewhat be aligned with the Front Office on, contracts may be handed out that could very likely hamper the Rangers from becoming a decent team in two to three years’ time.

Instead of focusing all on the bad of late, I decided to look at two interesting streaks that occurred in the first half of the season. The streaks were (figures via Corsica):

Despite the decent gap in expected goals and corsi (which is rarely sustainable long term), this was some of the most quality and consistent hockey the Rangers played in the first half of the season. While some players were just flat out playing better, there is also the chance of some different systems instructions going on. At the same time, the following lineup changes happened:

Many of these changes have been moves that NYR fans have been calling for. This list includes Staal & Pionk seeing less TOI, Claesson and Shattenkirk seeing more, and DeAngelo getting a legitimate shot (McQuaid’s presence on the team in general, non-withstanding). Skjei has been better of late, and Zuccarello is clearly slowing down and may be on his way out, given recent public comments.

So while the two streaks don’t gleam some sort of magic formula for perfect hockey, it does indicate that the losing doesn’t have to be complete blowouts where the Rangers get caved in. If changes are coming to the defense, which Quinn hinted at on Monday, let’s hope they align with the above.