Stats To Chew On Analysis

A Mixed Bag of Mediocrity

With one game left in November, the Rangers have played 25 games and sit 3rd in the Metropolitan division. While that of course exceeds expectations for many, if you were to choose a statistical category that the Rangers rank almost that high in, what would it be? 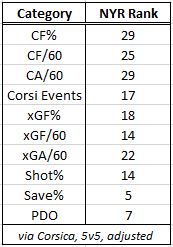 Save Mr. Lundqvist in net, the rest of the team ranks range from average to downright bad. Not that this wasn’t expected, and injuries have certainly played a role in dimming any hope of over-achieving, however this November run has been buoyed not by an improvement in play, but rather by some fortunate shooting and consistent play in net by Lundqvist. 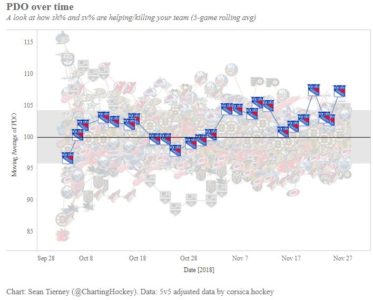 That all being said, as we inch towards game 30 we are reaching the point of the season where underlying metrics such as Shot Attempts (Corsi) and Expected Goals begin to have their highest predictive powers for the season. I wrote in early September that the majority of models had the Rangers just under 80 points, and after banking more points than expected in November, the Rangers now range anywhere from 82 to 86 points from the public models available. Last year, that would place the Rangers anywhere from 19th to 22nd in the league standings. Is that what the Rangers are this year? Barring any major personnel changes, the answer to that question is likely yes, especially given David Quinn’s early choices on how to deploy his lineup even before the injury bug hit certain players. 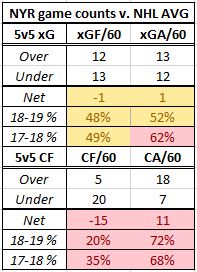 The reason the answer is a likely yes to the Rangers being just below average (rather than full-on tank bad) is due to two reasons:

The first item is a good problem to have, to an extent. While roster construction (aka talent) certainly drives a team’s expected goals for the most part, there is also a link to coaches who prefer different styles of play. In recent history, the general issue with NYR hasn’t been their Expected Goals for per 60 (xGF/60), but rather their xGA/60 (against), which ranked dead last in 2017-18. Under Quinn, high-danger and medium-danger chances are down (slightly), but because they’re still struggling with the shot share, low-danger chances are up (via NaturalStatTrick, see below). Speaking relative to last year though, this is of course an improvement, and hopefully protecting the middle will be a staple of Quinn’s system.

In the end, though, the Rangers are spending too much time in their own zone, which can be seen in their 29th-ranked Corsi-For percentage (only Anaheim and Ottawa are worse). From 2013-2018 in the NHL, the correlation between Corsi For and Expected Goals is about 78 percent. Only 15 out of 79 teams who have posted Corsi-For percentages under 50 have ended up with an Expected Goals For % over 50 (aka 19%). Unless NYR also begins out-shooting teams, their xGF % will likely fall as well.

The shot share issue is also why you may have seen some of NYR Twitter slightly upset as to how Quinn is deciding who plays, and how much. While the Rangers are certainly on track to eventually sell on some players in order to continue the rebuild, it should be stated that some players are not being scratched or penalized for their play like others. Let’s take a look and some Forwards first. 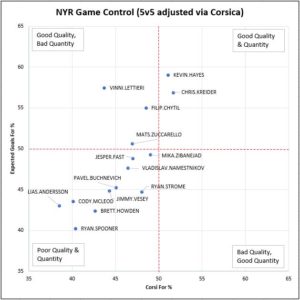 The way to read this graph is to know that up and to the right is good, while down and to the left is poor. With this, we can see that Hayes, Kreider, and Chytil have carved out a niche for themselves, regardless of the Rangers opponent. I think most would agree, even without knowing what Expected Goals or Corsi is, that those three have played well. The middle is where it gets a little muddled. Zibanejad is always tasked with playing the other team’s best players and Zuccarello was riding shotgun with him before his injury. Namestnikov and Fast have had up and down starts, and Buchnevich was just finally getting going before his broken thumb.

The real focus, if NYR were to actually try to get better with some addition by subtraction, would be in the bottom left hand corner. Spooner was traded away (months too late) and while McLeod is injured, many would agree he shouldn’t be playing regardless. Our junior saviors Andersson and Howden are interesting cases. Andersson hasn’t had much of a chance up with increased time on ice, so that is something I wouldn’t mind seeing. Howden, however, is masking some not-so-great play with a high shooting percentage (16% personal, 10.7 on-ice aka him and his teammates). A brief stint in the AHL may not hurt him in the long run.

This finally brings us to Mr. Jimmy Vesey. On pace for a 26 goal season at age 25, his situation screams “sell high” to me as we move forward. Vesey has never been a positive shot share (Corsi) or Expected Goal player relative to his teammates in his 184 NHL games played. And while he clearly has a nose for the net and some shooting talent (career 13%), it is not necessarily at a level that couldn’t be replaced with the cap space that will be available to the Rangers. 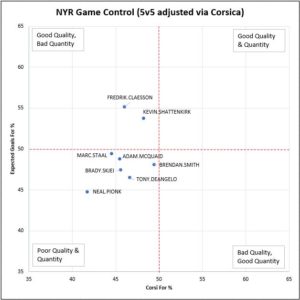 As has been evidence the last few years, the Defense is where Jeff Gorton has his most work to do. To start positive, Fredrik Claesson has rightfully received praise from many outlets, and is doing his work while mostly playing against middle-six forwards (based on opposition TOI over the season). His main D-partner, Kevin Shattenkirk, has also had a nice start to the season despite maybe not looking as visually pleasing at some points. One item that I haven’t seen highlighted much with him is his career-low 2.1 shooting percentage (career average = 6.3). He’s still getting about 2 shots on goal per game despite not being on the Power Play as much (which, why?), so unless he’s going to have a snake-bitten season I think 22 may begin to find the net eventually.

Marc Staal, Adam McQuaid, and Brendan Smith all fall into the “fine” category as much of the same goes for them as Shattenkirk: it just hasn’t looked pretty at times. To me, this is likely because of the point of their careers – all three could probably be ok to good 3rd pair players on a very good team, however the Rangers are not that. Brady Skjei is having a bit of an extension-signing hangover start to the season, so it will be curious to see if he rebounds as he’s played less minutes in the last 10 games or so. Anthony DeAngelo has played well relative to his teammates, but he’s still below water overall. That being said, it will be nice to see him stick in the lineup as he for sure creates chances and is on a contract year as well.

As with the Forwards, there is a single name at the end to focus on, and that is Neal Pionk. Pionk is and/or does all of the following:

With only 4 of his 15 points coming at even strength (none shorthanded, mind you), he just isn’t playing at a level yet that indicates he is or can be an effective NHL player. This could have something to do with Staal, sure, but he shows similar numbers away from Staal as well. Time will tell, as it seems Pionk will be a staple of the NYR lineup this season.

In the end, the Rangers have been a mixed bag thus far this year. In the beginning, when the wins weren’t coming as easy, there were some indications that a healthy roster may be better than most projected. Then, as the injuries hit and the wins started falling with hotter shooting and consistent goaltending, the play also started going south despite the points in the standings. We are likely still headed towards a decent sell-off at some point from Gorton, but it will be interesting to see if anything changes as the look of the lineup develops as well.

Categorized: Stats To Chew On Analysis