Of the four models that I am tracking as we move towards the 2018-19 NHL season, the New York Rangers come in at an average of 78.6 points. The models/individuals include Game Score (Dom Luszczyszyn), Corsica (Emmanuel Perry), Rob Pizzola, and Andy MacNeil. I do plan to add the HockeyViz (Micah Blake McCurdy) model when he releases it in a public manner.

As all Ranger fans know and as most projections are pointing out, the main issue with the Rangers is the weakness on Defense. Outside of extending Brady Skjei and a depth signing of Fredrik Claesson, NYR did nothing else in terms of improving one of the worst defensive units in the NHL last season. Of course, the prospect pipeline now has a few more names for the blueline, but at this moment it is still very much lacking for impact NHL players within the next two seasons. The Offense, meanwhile, hasn’t been an issue for the organization in nearly a decade and certainly doesn’t appear that worse for the wear looking forward.

I set out to confirm these projections in a very simple manner: by looking at the projected shot and goal differential for NYR. I did this by using Dom’s Fantasy Projections, of which I am a big fan. While it probably isn’t a perfect idea to compile these for a team basis using fantasy projections, I was still intrigued as to what they would produce. Here’s how NYR looks in the end: 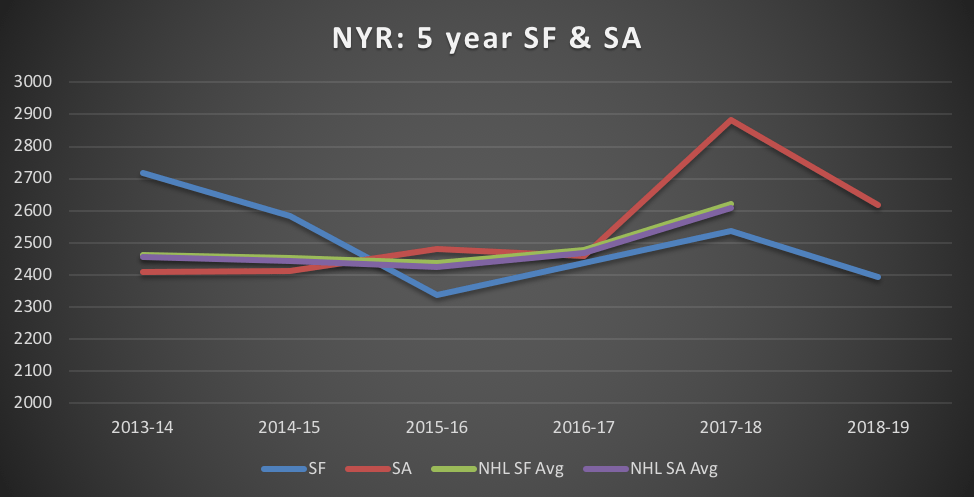 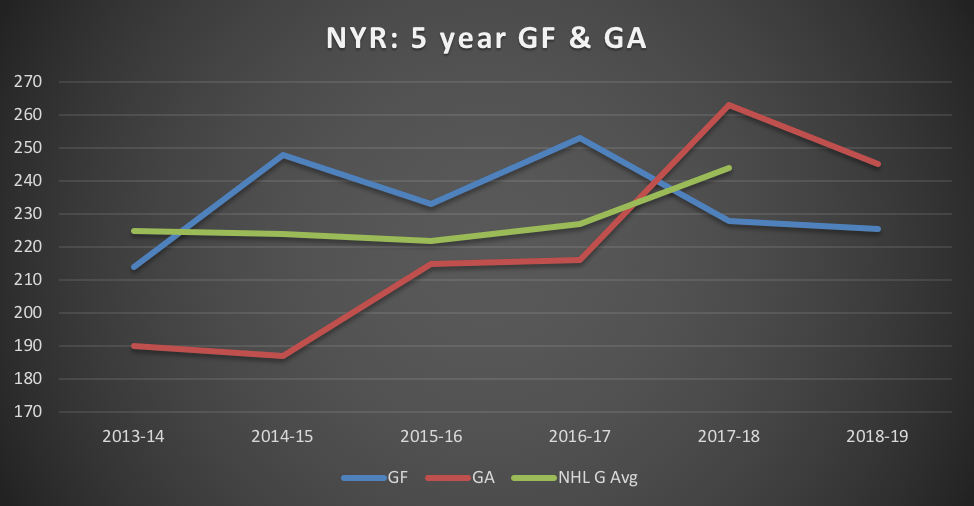 Dom’s projections are based on 3-year weighted averages with adjustments, so it’s not overly surprisingly to see NYR step back in all categories based on the 2017-18 season being an absolute free-for-all on the ice under Alain Vigneault.

Using Rob Vollman’s rule that 6 goals equal 2 standings points (Hockey Prospectus/Hockey Abstract), we can use the goals for and Goal Differential to roughly estimate NYR’s points. With a team goals for of 226, this would equate to 75 points in the standings. We could also use the -20-goal differential to say that NYR is 6-7 points below league average, which based on that being 92 last year, would put NYR at around 85 points. In the end, 75-85 points probably sounds about right for NYR as they are constructed now, just as the model averages state.

Personally, the only two caveats that could throw the models and projections off about NYR are as follows: 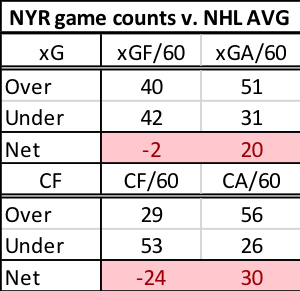 To conclude, the projections all seem very in-line with the reality for NYR, a rebuilding team with an intriguing offensive future with still plenty of work to do in the coming seasons. The only surprise that I can see happening is if NYR ends up being better than the numbers suggest, not worse.