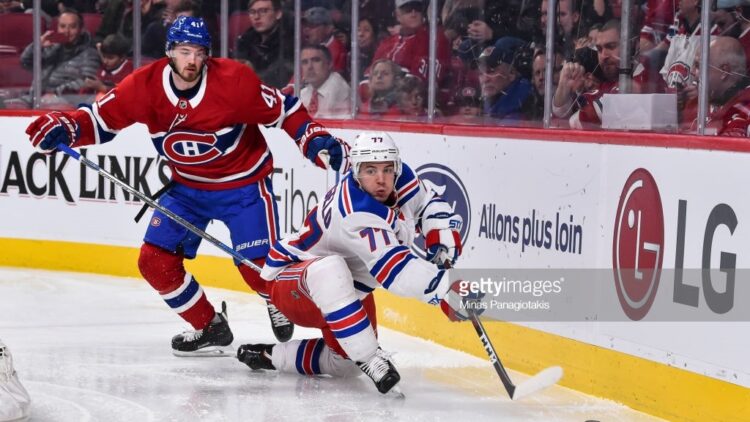 That seems to be the most recent debate that has hit social media, as fans have weighed the pros and cons of both players. Both players are smooth skaters. Both players can move the puck well. Pionk seems to have a more well rounded game, while DeAngelo appears to lean more towards the offensive defenseman role. Both play RD, where the Rangers have Kevin Shattenkirk, Adam McQuaid, and sometimes Brendan Smith. There appears to be a logjam, hence the debate.

Before unpacking the debate, let’s look at actualities for the Rangers. This really shouldn’t be about one or the other. It should be about finding time for both of them to grow, and then make a decision down the road. However the debate is the debate, and here we are, talking about it. But I digress.

Pionk has a reputation of being a more sound defenseman in his own zone. However his numbers show he is struggling mightily. The reality of the situation is that Pionk is still struggling to adjust to the NHL game. That’s fine. That’s why the Rangers are in the middle of a rebuild. He’s scoring, so he’s adding something to the lineup, which is all you can ask for.

DeAngelo has a reputation of being poor in his own end, but an offensive juggernaut. He’s put up a line of 2-5-7 in nine games, which is very solid. Pionk has a line of 3-6-9 in 15 games. Also solid. It looks like we have two very similar players.

Getting into possession numbers, it becomes clear that one is performing better, though.

It’s very early on, but all of these numbers lean towards DeAngelo as the better performer so far. This shouldn’t surprise many folks, DeAngelo comes with first round pedigree, and Pionk was an undrafted free agent. However there is still a perception that DeAngelo is terrible in his own end, and Pionk is not.

This perception is not just for us fans looking at the numbers either. David Quinn routinely gives Pionk all the defensive zone starts while DeAngelo gets all the offensive zone starts. While this doesn’t tell us much about how it impacts their numbers –it’s been proven that zone starts don’t impact possession numbers that much, whether I like that conclusion or not– it does tell us how the coach perceives both players. DQ thinks Pionk is better defensively. DQ thinks that DeAngelo needs sheltered starts.

That perception drives the conversation and the debate. Pionk is viewed as more well rounded, thus fans would prefer to keep him over DeAngelo. However early on, that doesn’t appear to be the case. DeAngelo actually has Pionk beat in every statistical category, including all scoring rates. This isn’t a true debate as to who is better. The answer is clear, at least for now.

Time for an exercise in perception.

Who do you prefer?

I ran this poll last night, before this post ran. I have no idea what the results will be. I’m assuming people will figure out the players, thus will skew the results. However it should be noted that before people started figuring out Player A was DeAngelo and Player B was Pionk (it really wasn’t hard to figure out), DeAngelo had the lead by a country mile.

Which defenseman would you rather have around long-term?

And now we see Pionk winning this debate. Add player names, and Pionk wins because he is perceived as more well rounded. Leave just the numbers, and DeAngelo wins the debate.

Now this is a bit of a silly discussion to have at such an early point in the season. Neither has hit 20 games under Quinn. Both will likely have, at the very least, another year under DQ before any decisions are made regarding their futures. The numbers tell a story, but it’s early and it’s almost impossible to get a read on where they will wind up at the end of the year.

But when it comes to the debate of Pionk or DeAngelo, the answer right now is both. Both need to be playing. Both need to be working through their issues on the ice. Both need to be properly evaluated over a full season (and more!) before anyone can truly judge what each player is. The debate of DeAngelo vs. Pionk is just that, only a debate. There is no actual decision that needs to be made, especially in November of the first rebuild season.