Neal Pionk and the case of good eyes and bad numbers 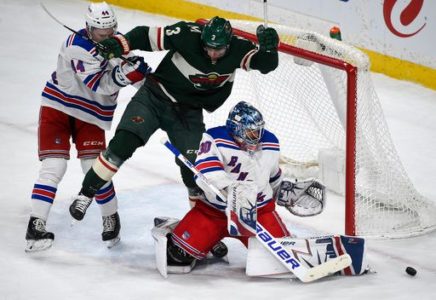 Neal Pionk is an interesting defenseman in the current Rangers rebuild. Signed as an undrafted free agent, Pionk quickly impressed in camp and followed that up with an impressive first stint at the end of last season. In that 28 game stint, Pionk put up a line of 1-13-14. So far this season, Pionk has six assists in seven games.

In addition to the points, Pionk has shown a great ability to move the puck up the ice and transition the rush to offense. He makes a good first pass, has good speed, and solid vision. He’s no Erik Karlsson, but he gets the job done. When he’s on his game, he’s able to do things like this at the blue line:

The newest edition of the Rangers Rewind is love. Read along, won't you? https://t.co/IuTQYZ71Rq pic.twitter.com/PySydVtYi9

The concern with Pionk is that the underlying possession numbers don’t necessarily match the production. Now don’t get me wrong, if Pionk continues producing points you are generally able to overlook poor possession numbers (see: Klein, Kevin). Here is how Pionk looks for shot rates thus far through the season. It isn’t overly pretty. 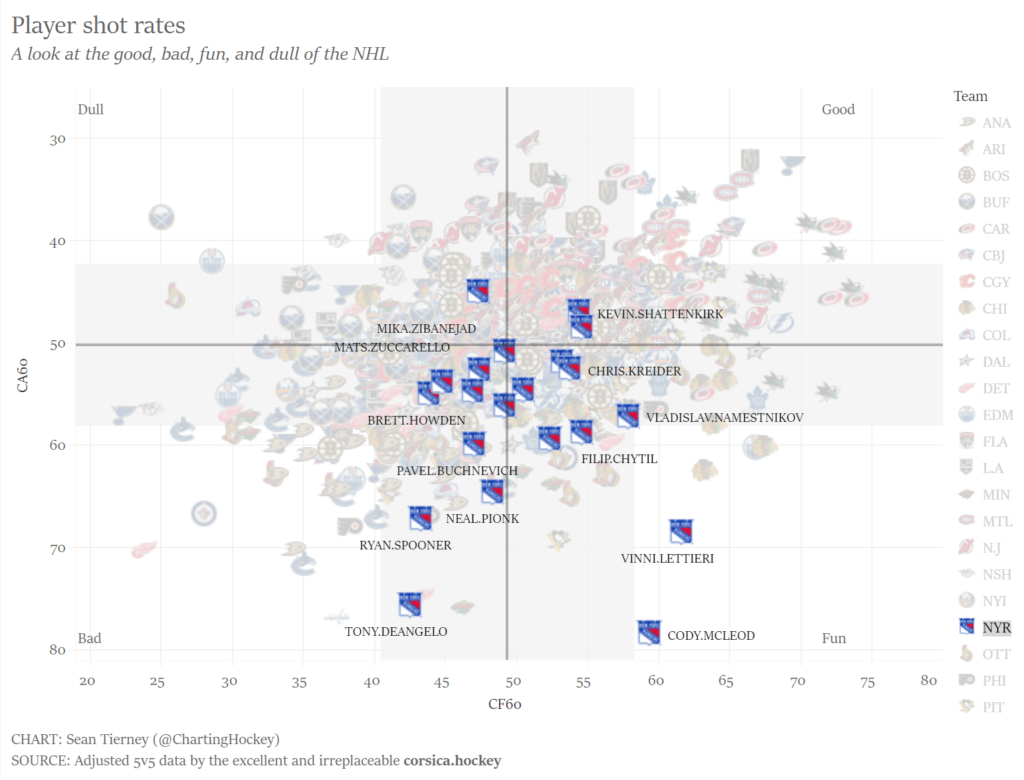 Pionk is firmly in the ‘bad’ territory here, and is among the bottom two defensemen in allowing shot attempts. Now, this is very early on and the Rangers are a team in transition learning a new system. However the numbers do reflect what we think we know: Pionk does struggle in the defensive zone.

This argument is supported by specific plays we can focus on with Pionk, such as this one.

Mike Hoffman scores on a pretty wraparound to cut the Rangers lead to 4-2 #NYR pic.twitter.com/oQToVSWQQd

Edit: It’s been pointed out that this is McQuaid, not Pionk. My bad, was tough to tell on the gif.

Pionk bites a bit to the top of the circle, allowing Mike Hoffman behind him for the give and go and eventual goal. This is a little play that does lead to a goal, so it’s fresh in our minds. This, however, gives credence to the argument that while Pionk is solid offensively, he will struggle to contain shots defensively. This is just one play, but there are others, and it shows why the possession numbers are a little low. Poor possession numbers usually mean one of two things: 1) The production won’t last for long, or 2) The points are coming from riding the coattails of better players. Of course, it could be both. Or neither.

The fact here is we don’t have enough games to really judge what Pionk is and what he will be. Pionk’s first 28 games were under Alain Vigneault, and no Ranger had good possession numbers under him. Now with seven games under David Quinn, Pionk and the Rangers are still transitioning to a new system. That takes time and there is a learning curve. Much like when the Rangers transitioned to AV’s system in 2013, the team and players begin to show what they will be around November/December.

When that time comes, I’m more likely to dismiss Pionk’s early numbers and see what his numbers are under Quinn after the team fully adjusts. It is a little unfair and honestly just downright irresponsible to judge Pionk and write him off after 34 games of bad possession numbers. This is a season to learn and to grow. There’s nothing wrong with seeing what the kid’s got.