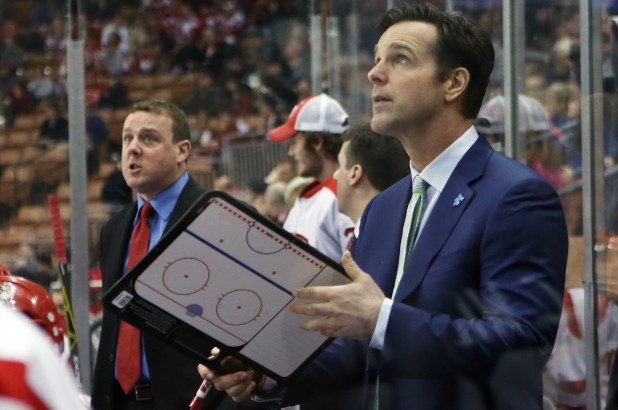 Last night was the first look we got at David Quinn’s Rangers. Pat had done some wonderful breakdowns of his games at BU (here, here, and here), which are definitely worth the read if you haven’t yet. This is the NHL though, and some adjustments were expected. With so little time spent at even strength, it was tough to get a long look at what Quinn will run. We did get some glimpses, though.

At even strength, it looks like the Rangers will play a bit of a 2-1-2/2-3 zone. While the forward play is still a little bit of a question for me, the defense play has been pretty clear. Maybe it’s because that is what I was focusing on last night.

For the two defensemen, it’s a pretty clear traditional hockey system. The strong side defenseman will follow the play by either:

The weak side defenseman will in turn take the man in front on his side. If there is no man there, he will continually keep his head on a swivel and park himself there. That’s a welcome change from the man coverage and the running around the defensive zone.

Here’s what I mean. Looks like a 2-1-2 in the DZ, which is weird to me. pic.twitter.com/rXWo0GtLWQ

Watch how the Devils rotate and skate through the zone. It’s not man coverage for the Rangers. If you noticed, Neal Pionk picked up Taylor Hall from behind the net, but released him at the top of the circle. Cole Schneider recognized this and stayed back. When Pionk released, he drifted back to the slot, with Schneider slowly moving to the boards.

Now this isn’t the perfect display of defense at even strength. Tim Gettinger didn’t even try to get in the way of the player cutting through the zone to the front. When Hall gets his shot on net, the Rangers outnumber the Devils low, but there is still a scramble. They also get beat to loose pucks and Schneider actually winds up behind the net. Part of this is adjustment to the system, and another part is the players on the ice.

As for the PK, there wasn’t much to analyze. It’s a standard diamond/box rotation. There are two differences though. The first is the defense positioning, which is the same at even strength.

Here’s how Fast forced the errant pass that Lias read so well. pic.twitter.com/UdfPKBtAlW

The second is on the forecheck. Alain Vigneault ran a 1-1-2 forecheck on the PK, aimed at disrupting the breakout in the OZ and then in the NZ. Quinn’s Rangers are more conservative, playing a 1-3 forecheck, loading up on the blue line to prevent zone entries. This is what led to Lias Andersson’s goal last night, pictured above.

I’m hoping to get better looks at Quinn’s systems over the next few games. Look for a much more in depth look next week.