Seventh Heaven – Patrik Virta is an exciting prospect to have

The Rangers are about to enter a new era. We will be seeing more of a youth influx to the roster and one of the names that fans are getting really excited about is Ty Ronning. This is for fairly good reason, sure he is an older player in the WHL but you love to have a 50+ goal scorer in the system. It is still a long road for him but this is a great step to take. Ronning however, isn’t the only 7th round pick in the system that has been making noise this season. Last summer, the Rangers selected Patrik Virta of TPS and he has quietly been providing them with value few get from 7th rounders this quick after the draft, even for a two-times overager.

All stats from this analyses and hype post are from Simo Teperi (@SimoTeperi). He has built a great website to compliment the already comprehensive stat website from Liiga. Being able to get this deeper level analysis is extremely useful for dealing with any prospects, especially the European leagues where the team building may be a bit different than in North America.

I discussed Virta a little bit earlier in the year mentioning how he is scoring a bit more than last season but his value would be in his on ice shot effects. Now a few months later, we have a greater sample size and a greater reason to be excited. Virta has already eclipsed his point totals from last year, currently going 12 goals and 22 assists in 53 games. Certainly respectable but it is understandable for some people that it doesn’t seem like a world beater but let us break it down.

Virta currently ranks 17th among all Liiga forwards in P/60 at even strength and 24th in primary P/60. This is an improvement on last year, where he was ranked just outside the top 30. His point production is respectable but Virta has absolutely pushed the play for his team and is always a threat on the ice. Virta ranks 3rd amongst forwards in CF%REL at 9.74, and is actually the best forward in the league in xGF%Rel at 12.21. The second best is at 10.92 and his name is Ville Leskinen, remember that name for another post later this year. What we are seeing is a player that makes his team better when he is on the ice by a significant margin but we can get even deeper. 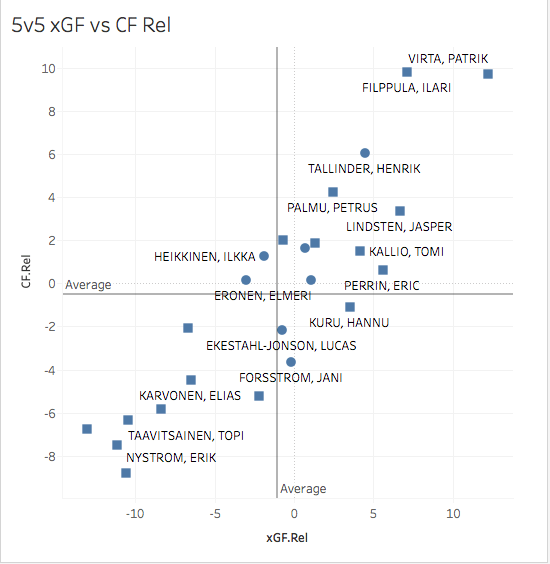 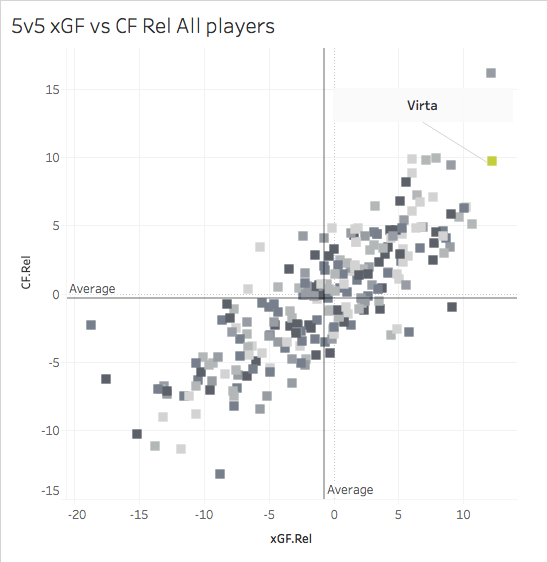 Yea… He is pretty good, when compared to the rest of the league

We can also talk about Virta’s usage as well. In order to do this I recreated one of the first advanced stats graphs I’ve ever seen by one of the pioneer’s Rob Vollman. I made his famous usage charts but for the Finnish League. 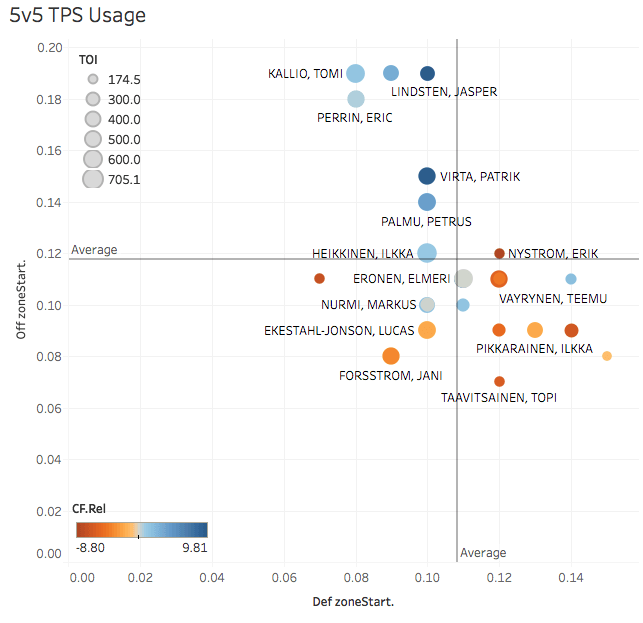 Virta is being trusted with not only ice time but a little bit more balanced ice time than some of the teams higher scoring but older forwards. Kallio, Perrin, and Filpulla while all talented producers in this league have been given some more offensive starts, and this is likely from simply the coach being smart and putting older, slower skaters in better offensive positions. This leads to Virta being given the good old Derek Stepan role on the team where, while he still gets some good offensive starts, he is being leaned on more defensively than some of the other go to producers on the team.

A greater all encompassing visual would be Simo Teperi’s player cards. 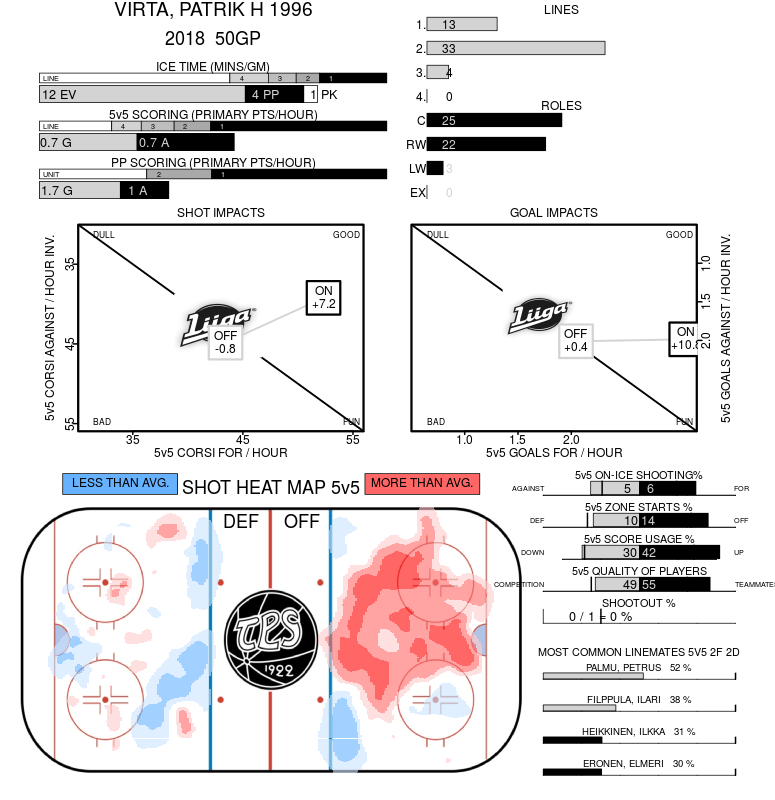 It is so easy to be excited for this guy when offensively his team completely dominates the dangerous scoring areas. It is no secret why his xGF is so high when the opposing team faces an onslaught every time he is on the ice. Meanwhile, defensively, it looks like the other team can really only get shots from the point off, which is awesome news as the wingers would cover the points while the center would help the defense deal with the cycle. The sheer emptiness of chances from areas around the net and lower in the slot makes Virta one of the most dominant players on the ice.

One can also see from both the shot and goal impact charts that while his team by themselves is about average, they immediately become a threat offensively when he is on the ice. It is not just the numbers themselves that excite me, it is the stark difference between when he is off the ice and when he is on the ice that make me think we can have a guy that may be able to make a jump soon.

Overall, I am really excited for Virta as a prospect but I am not willing to get ahead of myself and call him our next sniper. I think given his on ice effects, Virta is looking like he can be a quality bottom-six player, perhaps in line with a center version of Jesper Fast as of now. He is clearly adept defensively and can help his team produce which would make him a nice add to the team.

The only thing missing from an outright dominant player profile is being a point per game player, but when you rank at the top of the league in nearly every other category one must wonder why. There are a couple of reasons and it is not his shot. If one were to ever watch him play –and you can see some highlights from @ajranger— you can see he gets his shot off fast and can find teammates with crisp passes. Turns out he ranks 110th in iShot% at 5v5, but given his on ice effects it is totally possible that he may just be unlucky.

Another issue may be linemates. It is not so much about a lack of skill but play styles. I spoke to a couple of people who watch him consistently and one problem earlier in the year is that Petrus Palmu, a Vancouver Canucks prospect, had issues with holding on to the puck a little too long in the beginning of the year. Virta can also likely need to bulk up a little bit in order to probably make a confident jump to North American pro hockey, but he clearly has all of the tools to be successful and outside of producing more. You likely can’t find a better all around player in the league than him right now.