Can Patrik Virta Push for an NHL Spot?

As most of you know, one of the main hobbies I have regarding hockey is creating visuals for other leagues. Prior to this year I have been mostly focusing on North America and Russia but I will now be seeping into most other leagues. While doing my research to try to get the most information possible, I truly became a big fan of the New York Rangers’ 7th round pick Patrik Virta.

For the new readers, Virta is a buzzsaw type player, he gets in on the forecheck and is defensively responsible. Over the last couple of years, he also began to generate points as well. Seen as a good playmaker mostly from behind the net given his adept forechecking ability Virta also has a pretty strong shot that has been used on the PP.

Overall he has been growing as a player and the Rangers felt it would be worth drafting his rights before other people can sign him. One other thing about Patrik Virta, he is becoming an absolute possession monster and given that he is 21 years old, Virta may be pushing for a roster spot sooner than we may expect from a 7th rounder.

I want to delve a little bit deeper on my love fest for Virta, and thankfully while looking for more information to put into my visual I came across a great shinyapp developed by @SimoTeperi ‏ found here. Simo created a wonderful visual that was inspired by Micah’s work and I will be incorporating them into this post.

We can begin the Virta love fest by simply saying he was one of the top possession players in the entire league for the last 2 years, he has also been producing at a rate that can shatter his last season numbers. After 26 points in 49 games last year, Virta has 15 in 19 this season. Not bad for more of a two way forward who was also given an A. 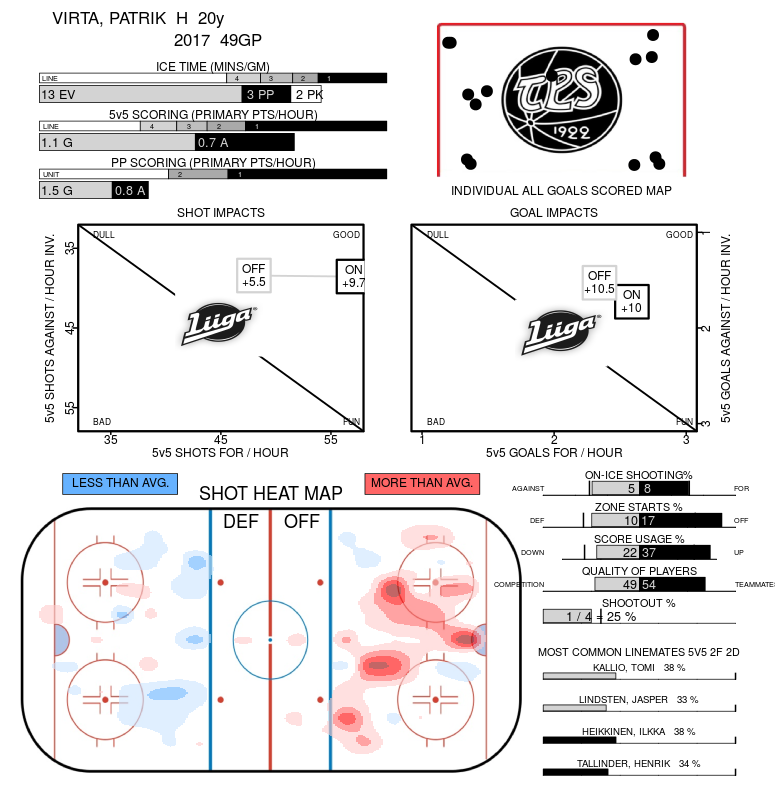 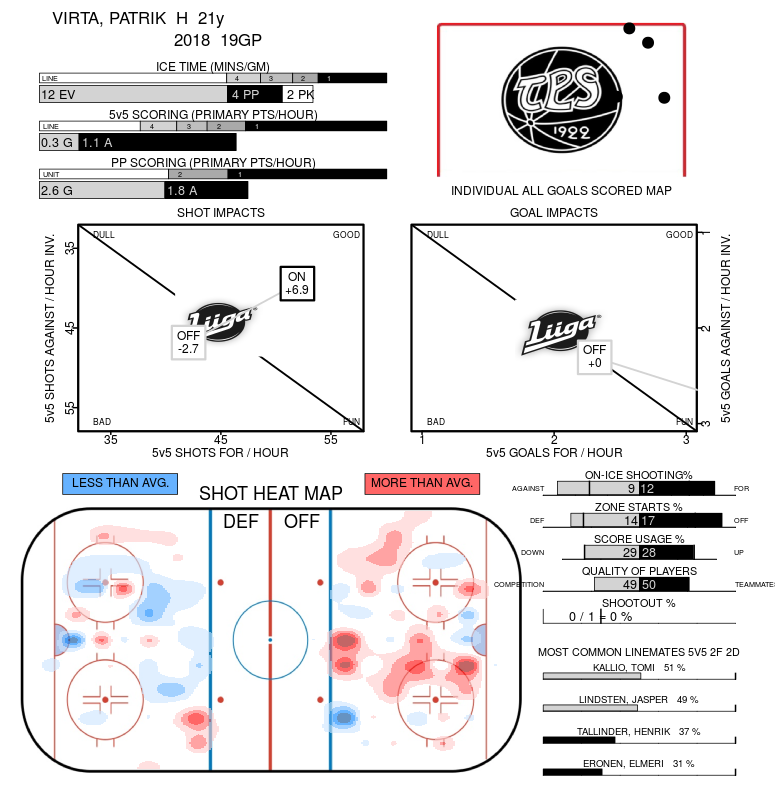 On the left we see Virta from his draft year and the right is this current 2018 season. We can begin to see some pretty bright pieces of information. First and foremost, Virta has been playmaking at first line levels since last year and has continued this year. The last couple of years, Virta has been a major possession driver for TPS. Even when the team was one of the better possession teams in 2017, they only did better with Virta on the ice. Right now the way the team plays when Virta is on the ice compared to when he’s on the bench is like a tale of two teams. He makes his team significantly better.

Regarding goals, Virta was still good but his team did a little worse during the 2017 season. That said I hypothesized that it may be an anomaly due to shot location, and it seems to be the case since he practically breaks the chart in Goals For during this current season. Overall, TPS is a top team when Virta is on the ice and the massive difference in possession in these situations is probably a good sign that he can be successful in a higher level league such as the NHL at some point soon.

If we were to look at the shot location charts we can see some really exciting things about Virta as well. On the defensive side in 2017, he not only kept the opposition to the outside but they weren’t really able to get any chances in the prime scoring areas above the league average. It was a complete shutdown. In 2018 the opposition is getting some more slot shots, however the front of the net is completely shutdown and once again it seems that most shots are from the outside.

Offensively we see the possession numbers that Virta has be displayed as dominance. In 2017 he practically owned the offensive zone. Generating a ridiculous amount of shots over the average in all of the danger scoring areas. The slot and the front of the net were absolutely owned with him on the ice. This is why we could’ve potentially expected better goals for numbers than what we saw last season.

We can also see that his on ice SH% went up from 8% to 12% this season. In 2018, once again, as TPS has regressed the dominance isn’t as stark, but you can still see some serious offensive control in the slot area way above the average. Overall, Virta on the ice leads to shutting down the opposition in your own end in some of the danger zones but offensively the team generates chances there.

In the most common linemates section we can also see that Virta’s play isn’t necessarily due to suddenly being put with top players. His most common forward linemates are the same as they were last year, only at a higher volume. Clearly the coach saw some kind of dominance with this trio and kept them together for the next season. Virta’s score usage and quality of teammates/competition are pretty much equal this season as well, which is a bit different than last year where he was mostly used in a shutdown role. We are seeing the evolution of a player who was already defensively responsible now being used as a go to guy in many different scenarios.

It is rare that 7th round picks make their NHL teams, even more when they were recently drafted, but the Rangers took a risk and drafted a guy that was already two years ahead of the draft class. They saw Virta’s play last year as a 20 year old and, given the age and maturity, perceived that to be the near final product, a product that can see the NHL soon. This season Virta is contributing more to his team, and when you can push the possession play like this while playing so many roles, perhaps its time to try out better competition in America. If this kind of season continues, Virta can likely be a viable 4th line option next year or a first call-up before clinching a spot.