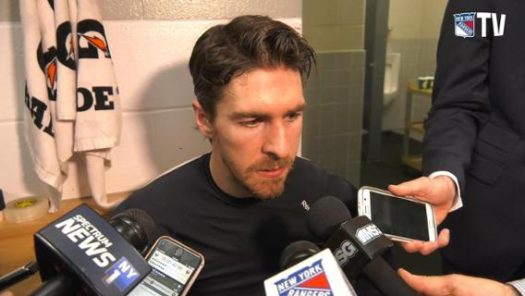 The Rangers up-and-down start to the 2017-18 season has called into question every facet of the team.  From Alain Vigneault’s obvious flaws, to questions about Henrik Lundqvist’s “decline”, to the lack of real center depth, there’s been no shortage of talking points as fans and analysts have tried to figure out why the Rangers have been largely mediocre this season.

One of the players that’s caught my eye this season, often for the wrong reasons, is Ryan McDonagh.  Even the most staunch McDonagh fan would have to admit that the Ranger captain just doesn’t look right.  His up-and-down season reached its nadir with a historically bad performance on Tuesday night vs. Dallas.

In that game, McDonagh was uncannily terrible.  He was on the ice for 45 shot attempts against and just 11 for in about 20 minutes of 5v5 ice time.  Yes, the team around him was horrendous, and yes his partner was Nick Holden for two periods (we’ll get to that), but this type of performance from a player of McDonagh’s caliber is hard to explain, and difficult to excuse.

We learned in November that McDonagh had been dealing with an abdominal strain, and the Rangers shut him down for four games.  In the five games after his return from injury (not including last night’s game against Ottawa), the supposedly healthy McDonagh posted the following on-ice numbers (data from naturalstattrick.com):

The cherry on top of all this?  McDonagh is without a goal so far this season.

So if McDonagh is actually healthy, what’s the explanation for his subpar play this year?  The easiest place to point the finger is at McDonagh’s defense partner, Nick Holden.  But as Dave highlighted a couple of weeks ago, Holden actually hasn’t been that bad (though he’s most assuredly not a first-pair defenseman).

Even more concerning is the fact that McDonagh just isn’t influencing play when he’s on the ice. McDonagh’s CF% relative to teammates is just 0.97, and his xGF% of 46.34 clocks in at -2.22 compared to the rest of the Rangers. For reference, Nick Holden’s relative CF% is 1.75, and his relative xGF% is 5.81. In the words of Internet legend Homestar Runner: “I’m sorry…what?”

So what should the Rangers do?  McDonagh is a cornerstone of the franchise.  He’s the captain, and if the Rangers believe they are capable of making a run, McDonagh will simply have to play better.  If that’s how coaches and management intend to proceed (and let’s be honest, they probably do), then there really is nothing to do other than continue playing him 25 minutes every night and allowing him to play through his issues.

Of course, there are other options.  One is reuniting McDonagh with Kevin Shattenkirk, and truly optimizing the defensive pairings behind a bona fide top two.  The other is to explore a trade, but that’s a discussion for another post.

It’s been a tough year for Ryan McDonagh.  Here’s hoping the captain figures it out.