Patience with Chytil and Rangers Center prospects the way to go 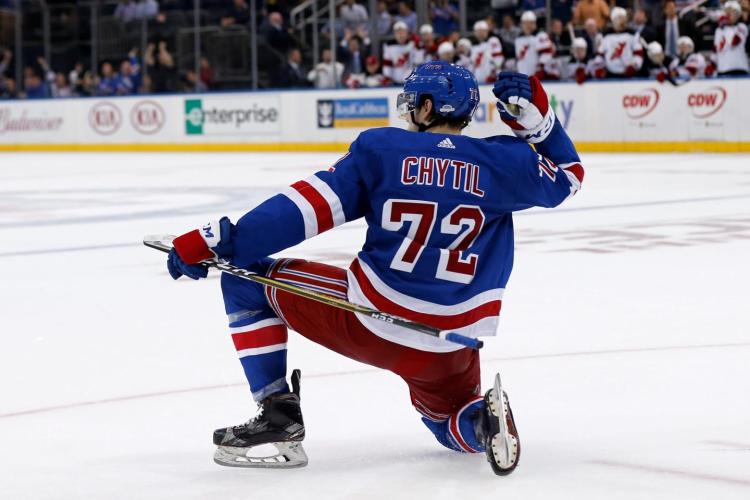 Following the weekend just gone, there will no doubt be plenty of calls to bring Filip Chytil back to New York at the earliest opportunity. Healthy again, the need at center still obvious (moving JT Miller again is not the answer) and fresh off a two goal outburst on the weekend, Chytil’s play is demanding attention.

Chytil is off to a tremendous start in the AHL with 11 points in 9 games but he is exactly where he should be. He’s the focal point of the Wolfpack’s offense, playing important minutes and is now starting to get comfortable with the system and the pro game in North America. The Rangers should be able to make the playoffs without him and should allow him to grow in Hartford at least for the short term. With the team’s logjam on the blueline at all levels of the organisation the team should also be able to upgrade the center position without losing anything significant in return.

Chytil’s strong start in Hartford and Lias Andersson’s strong play in Frolunda prove the Rangers were right to send both prospects to locations where they’re focal points for their respective teams and not bit part players for the Rangers. Mika Zibanejad is absolutely locked in as the Rangers top line center and Kevin Hayes is playing well enough that, while probably best suited as a 3C, he’s a competent option on the second line.

The Rangers are outside of the playoffs right now but it’s fair to look at the standings and expect significant change – change that should come without Chytil fast tracked into a peripheral role. Ottawa, Detroit, the Devils, Carolina all remain ahead of the Rangers but that’s at least four teams the Rangers should outlast and leapfrog. All four are less talented than the Rangers.

Looking at the standings, the Eastern conference is full of parity and inconsistent play. If the Rangers are intent on a short term injection of talent to get and stay ahead in the playoff race then going external for help at center is the way to go. Add depth, add a rental; just don’t retard any individual prospect’s long term development for a short term ‘win’.

Chytil and Andersson need to be playing regular hockey without significant expectation and, ideally, away from any major media scrutiny. On Monday Dave discussed the merits of Vinny Lettieri who is also off to a fantastic start in Hartford. Lettieri is indeed deserving of a promotion if the Rangers go the internal route. The Rangers have less commitment –and risk attached – to Lettieri’s development but here’s where I disagree with Dave. Let Lettieri also develop with Chytil in Hartford, again, without the pressure to perform and not playing ten minutes a game (at best?) in New York.

The Rangers need an upgrade at center; that much is obvious to anyone who has watched the Rangers more than once this season. The upgrade needs to come externally though. The Rangers appear to be able to get by as is. If that’s not good enough then deal from a position of strength – organisational defensive depth.

Consider the past few Ranger prospects that were given proper time to develop their games before making a splash in New York. Pavel Buchnevich wasn’t rushed to New York and he’s slowly becoming an integral part of the Rangers’ offense. Jesper Fast was given three full seasons in Sweden and 48 games in the AHL before he began to make an impact in New York – now he’s a mainstay for the Rangers.

Brady Skjei is another given time to hone his game outside of New York’s spotlight. Ryan McDonagh had 38 games in the AHL as well as additional seasoning in college. Chris Kreider wasn’t seen in New York for several years after being drafted. You get the point. Almost the entire core of the current Rangers roster were prospects that were developed properly.

The best recent examples of the Rangers successfully developing their own, were those that weren’t rushed to New York. The Rangers can compete, and should (lots of shoulds in this post in italics…) be able to make the playoffs, without rushing Filip Chytil and co. How the Rangers perform when they get to April will be influenced more by Jeff Gorton’s ability to handle the trade market than it will be by promoting an 18 year old prospect, no matter how tempting that may appear.