Musings: Building blocks on defense and the offensive slump 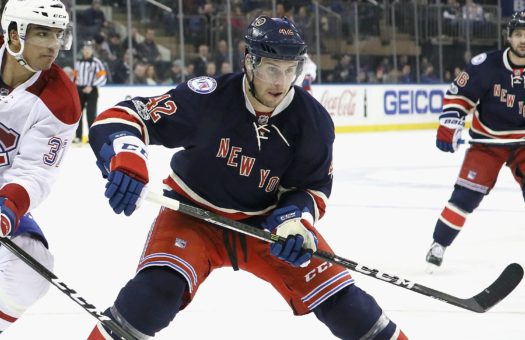 – Both Dave and the guys at Blueshirt Banter started beating the drum last week – but they’re absolutely right that Brady Skjei deserves more attention. Skjei has gotten lost in the shuffle because of the ridonkulous rookie class, but he’s been better than anyone could have imagined this year, especially offensively. That part of Skjei’s game was never trumpeted in scouting reports, but his unexpected passing skills combined with his ability to skate the puck to safety have made Skjei a very dangerous weapon.

– With Ryan McDonagh’s return to an elite level and the reports that New York is interested in retaining the very useful Brendan Smith, the Blueshirts could be halfway to a solid defense going forward. Smith has been pretty much exactly as billed – he brings nothing to the table offensively but is rock solid in his own end, plays with an edge and flips the ice pretty quickly. There’s no flashiness to his game but he’s a perfectly effective player.

– Tanner Glass has actually been pretty good since his recall. SHHHH! I know, I know. But Glass has done exactly what Alain Vigneault hoped he would – bring energy by using his body, crash the crease and work his butt off to create a decent cycle with his fellow fourth-liners. Glass’s usefulness will inevitably wear off when his teammates pick up their game, but right now it’s hard to argue with Vigneault’s stunning decision to bring the agitator back from Hartford.

– Kevin Hayes and J.T. Miller have enjoyed tremendous breakout seasons, but both players have slowed significantly over the last few weeks. Is that a temporary malaise, or have they started to run out of gas? It’s hard to tell given the teamwide offensive slump, but these guys in particular have stuck out since they’re not single-handedly creating offense as they were for much of the year.

– The one guy that has kept right on chugging is Chris Kreider. This is his time of the year, no doubt. Kreider thrives on the physical play in the dirty areas where he can use his body to create space, and he has that extra gear that makes him a nightmare on the rush. In the past he’s gotten in his own way mentally, but Kreider is brimming with confidence now and has been consistently excellent for months. He’s ready for a big playoff run.

– The other guy that has been extremely consistent is Rick Nash. His production isn’t at the level we’d hope for, but I still think this has been his best season with the Blueshirts. Nash has been driving the net all year and is routinely making top defenders look silly with his ability to protect the puck. Anyone who follows me on Twitter or reads this blog knows that I’ve frequently been one of Nash’s biggest critics, but I can’t find a weakness in his game right now. When he’s playing this way, he’s impossible to defend.

– Besides Nash, Derek Stepan is probably the most polarizing forward on the team. The debate over whether he’s a bona fide first-line center or a very good No. 2 has never subsided, and Stepan’s 23-game goal drought only added fuel to the fire. Stepan is what he is – a dogged two-way playmaker that contributes in all situations. The fanbase would become a lot more aware of his value if he were to go missing due to injury, or a potential trade this summer.

—
Question time:
1) Do you want to retain Smith? If so, what do you think is a fair contract for both sides?
2) What’s your opinion on Nash’s season?
3) Where do you stand on Stepan’s value?