What is wrong with Derek Stepan? 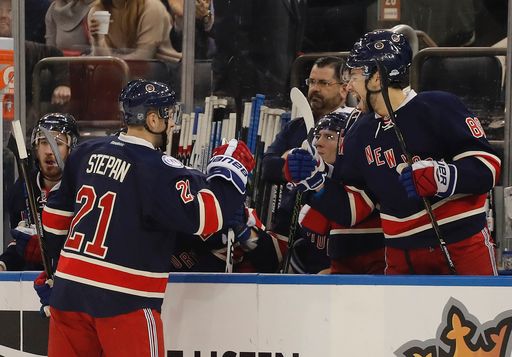 There are two major discussion points that don’t involve Tanner Glass or any of the members of the defense. One is the woes at MSG, which I covered yesterday. The other is the slump of the Rangers top center. Derek Stepan has a line of 12-32-44 through 67 games. That puts him on pace for 54 points over an 82 game season, on par for his career average.

However the Stepan we’ve seen since January 17, the last time he scored a goal, is not the Stepan that is capable of putting up 54 points per season. In that span of 22 games, Stepan has just eight assists. It has drawn the ire of a good number of fans as well. And don’t think it’s gone unnoticed around here either. So let’s dive into what might be troubling Stepan.

Usually the first thing I look at when a player is slumping is the shots on goal. Stepan has taken 51 shots on goal in the 22 games that he’s been slumping, for an average of 2.3 shots per game. In the other 45 games, Stepan took 114 shots, good for 2.5 shots per game. So while the shot total is slightly down, it’s not necessarily alarming. He’s still getting his shots on net.

The next item I usually look at is shooting percentage. Of those 114 shots, Stepan scored 12 times, which is good for a 10.5 SH%. That’s rather high, and a full percentage point about his 9.6% career shooting rate. So while regression was due, it wasn’t supposed to be a major shift. He is currently sporting a 7.4 SH%.

When the base numbers fail to give us anything concrete, which they are not, it’s time to dive deeper into his possession trends. Since we are worried primarily about his offensive contributions, we are going to focus on Corsi-For and Scoring Chances-For (25-game rolling averages). First let’s look at raw CF/60:

So Stepan is actually trending up on his raw shot attempts. But that doesn’t really tell us much without looking at the quality.

Now we might be on to something. Stepan is seeing his scoring chances drop since the beginning of the season. Now while these may not be his scoring specific chances, it would certainly impact his overall scoring, both goals and assists. However it’s very difficult to pin down why this might be occurring. There are many potential reasons why this could be happening, and it could be one, some, or all of those reasons. His SCF/60 of 8.04 is ahead of only Oscar Lindberg, Brandon Pirri, and Matt Puempel. This is a huge decline from last year’s 9.48 SCF/60.

After looking at everything here, the only inference I can make is that Stepan is simply just struggling right now. There are a ton of hockey cliches to use here, like gripping his stick a little too tight. There is just no simple answer to why he is struggling so much. It may be one of those things that the club just needs to wait out. It’s better he has these struggles now than in April.