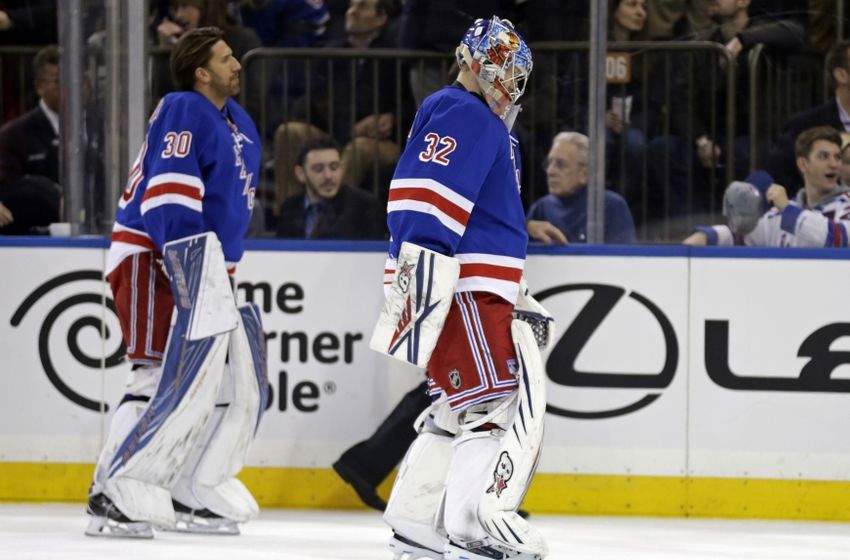 When grading the front office, I had to look at the offseason body of work in addition to the moves made in season. Considering the injuries, the front office has been a little busy lately. As for the goaltending, well I’m taking a different approach this year. Instead of looking at each player individually, I’ll be looking at both Hank and Raanta as a single entity.

This is a tricky one. On the one hand, GM Jeff Gorton and co. did a masterful job in the offseason transforming the forward corps and loading up on youth, speed and skill that have set New York up for the next decade. On the other, Gorton allowed Keith Yandle to depart for next to nothing and added only Nick Holden to an ailing blueline that desperately needed an injection of new blood.

Gorton scored some of the biggest coups of the offseason when he landed PK ace and elite goal scorer(!?) Michael Grabner for two years, $3.3 million, beat out a horde of suitors to ink highly coveted UFA prospect Jimmy Vesey, and stole Mika Zibanejad (plus a second-round pick) from Ottawa in exchange for Derick Brassard.

Gorton also has demonstrated a revised philosophy focused on talent above all while accumulating a stable of depth forwards including Brandon Pirri over the summer and Matt Puempel off the waiver wire.

Gorton’s season will be defined by his ability to fortify the defense before the trade deadline. If he’s successful, this team may have a Cup run in it. If he’s not, yet another year of Henrik Lundqvist’s twilight will flicker out and the Blueshirts will again be staring at a tricky offseason with expansion looming large and a wholesale makeover on defense necessary.

What choice do we have but to grade the Blueshirts against a curve?

For a full decade Lundqvist has set the bar league-wide for the gold standard in net. The fact is – he has not been able to meet that level this season.

Certainly a good amount of the blame can be placed on a porous defense that might ruin the careers of most mortal goalies. But throughout his career Lundqvist has overcome whatever challenges have been thrown his way and he’s had a much harder time doing that this season.

The good news is that backup Antti Raanta has picked up the slack and been marvelous in Lundqvist’s absence, whether that be due to performance, illness or rest.

The Finnish netminder has played so well that he sparked a brief goalie controversy and has moved to the front of the line for possible Las Vegas expansion draft selections.

This duo hasn’t been infallible this season as in years past, but collectively they remain in they’re still in the top 10 in goals against. Given the issues in front of them, that’s pretty remarkable.