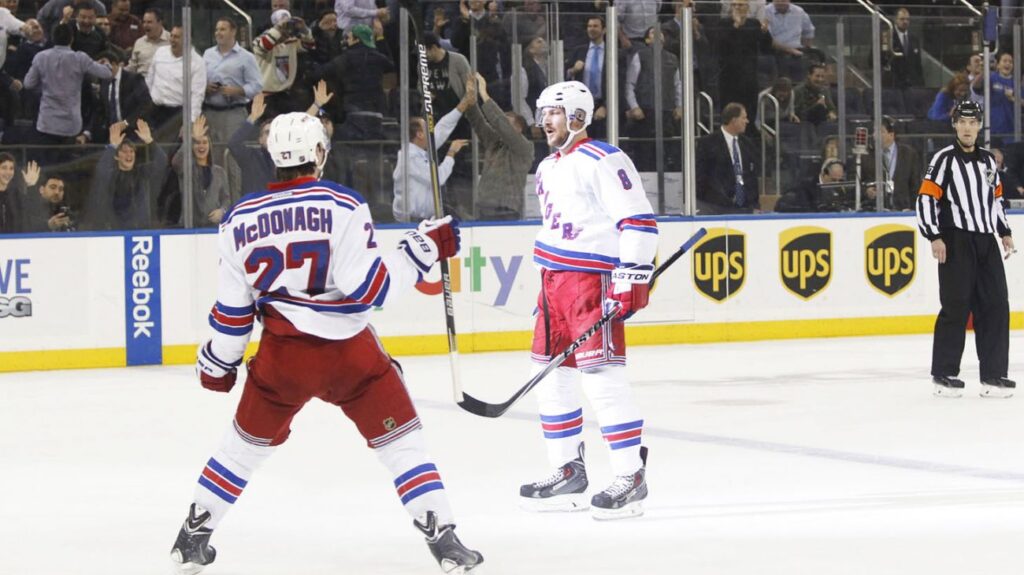 With the Rangers on their bye week, which was perfectly timed with the halfway point of the season, we are afforded the opportunity to evaluate the Rangers with nothing else going on. Midseason report cards have been a bit of a tradition here at BSB, so let’s keep that tradition going, shall we?

Over the next few days, each of us will be tackling a different aspect of the team, and assigning grades accordingly. I’m batting leadoff here, and I’m going to be discussing the most polarizing aspect of this year’s team: The defense.

Overall, the back line for the Rangers has been relatively bad. The combination of age, injuries, wear and tear, and a shift towards speed has made what was once a strong defense into a bottom-five unit in the league. The slow start by Henrik Lundqvist exposed the defense even more. But it’s not all bad, either.

The Captain of the team has had a bit of a roller coaster season. He started the season white-hot, with a run of eight straight game with an assist (nine total). Overall, he has a line of 2-23-25 at the halfway point, putting him on pace for his first ever 50 point season. Increased powerplay time has been a major factor in McDonagh’s increased production, with nine points (eight assists) with the man advantage.

McDonagh has cooled off recently, but he’s still a premier defenseman in the league. He has been solid in all three zones and at all strengths. He goofs sometimes, as does every player in the league, but his goofs are few and far between this season. Still, there are times where you get the feeling something is missing.

Before you jump down my throat, I’m assessing his first 40 games this season, not his body of work or overall heart over the past decade. So lay off the “he’s a warrior, given everything for his team” crap that I get all the time. Take a step back and look objectively at the first 40 games of this season only.

The Rangers were really banking on a bounce back season from Girardi. What they got was a solid start, and then a walk off a cliff. Yes, Girardi had a good start to the season. However outside of the first ten or so games, he’s been an absolute disaster. It’s gotten to a point where it’s beyond usage. We all know Girardi is not a 1RD anymore –even if it took Alain Vigneault 40 games to realize this– but it’s gotten to a point where we are starting to doubt whether sheltering him will even work. And that’s without even mentioning that horrid contract.

Just on the ice, it’s clear Girardi is a step behind most forwards. The puck is a grenade on his stick. He’s just been bad. On par with last year’s historically bad season. And what’s making this worse is AV’s words that he would rest Girardi, something he sorely needs, and then didn’t. But at this point, does rest even help?

Grading Girardi is tough. Objectively, he’s been one of two just flat out awful defensemen on the team. However when based on expectations, his good start was actually something I didn’t expect. So….

The other player that the Rangers were banking on for a rebound season, they certainly got something like that with Staal. Staal has been surprisingly decent this season, capable of holding his own with a good defense partner as a second pairing defenseman. He and Nick Holden have clicked and have done a solid job as the second pairing. Staal, who always had good raw tools, seems to have gotten some of it back together. He’s always been a solid defender with good stick work, positioning, and skating. He’s been much better there. Puck movement is still a concern though. Always will be at this point in his career.

One of Staal’s biggest contributions, which may sound harsh, is that he got hurt. That’s not to say Staal needed to be out of the lineup, it’s that his injury forced AV to shuffle his defense pairings. That was a long time coming.

Holden’s career as a Ranger got off to a rocky start. Placed on a top pairing with McDonagh right away, Holden struggled both in that role and with the new system. After a few games he was moved down to the third pair, where he play improved. He was then moved up to the second pair on his off-side with Staal, where he has found a solid role with the club.

But let’s make one thing abundantly clear: Holden is this year’s Kevin Klein. Goals and points are masking some pretty large holes in his play. It’s passable for now because he’s scoring, however if and when that scoring dries up –and it will, Holden is outpacing his career rates by almost double– we will begin to notice these holes. The right moves on defense put him back at 3LD, where he likely belongs. But for now, let’s call him a pleasant surprise.

As the overhyped rookie and only first round pick in the past 30 years, Skjei had a lot to live up to. Sheltered on the third pairing to start the season, Skjei took a little while to learn the system, struggling in his own end at times. What was very apparent, however, was that Skjei could move the puck up the ice with either passing or his smooth skating. Skjei earned more time and forced himself on to the powerplay as well. He’s still a rookie, so there are going to be mistakes. I expected some solid two-way play with some good, quick passes to get out of the zone. I’ve gotten that, plus a line of 1-16-17 and a 30 point pace. That’s just a bonus.

Oy. Been saying this for a while, but when the goals dried up, Klein was going to get exposed. Overall, Klein hasn’t declined that much, it’s just that he isn’t scoring anymore, as many predicted, so the other aspects of his game are getting more attention. Never a smooth skater or a good puck mover, Klein is in the same boat as Girardi right now. He’s been downright bad. If the Girardi curve has shown us anything, it’s that it’s not likely that Klein rebounds either. If Girardi isn’t headed to the press box, then Klein should be.

He hasn’t played much this season, but you know what you get with him. He’s, at worst, on par with Klein and Girardi in his own end. But Clendo can at least skate and move the puck. He will hopefully be getting more playing time.