Festivus: The airing of Rangers grievances 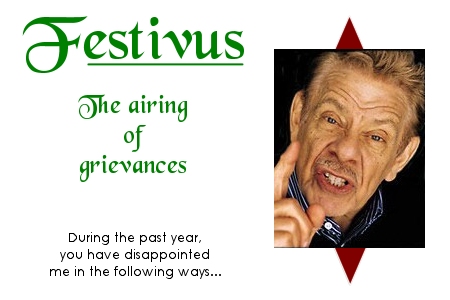 Happy Festivus everyone! In true Festivus spirit, let us use today to air our grievances. There are many grievances us Rangers fans have with the team, the fans, the Garden, and the NHL. Or perhaps you just want to air your general life grievances, that’s cool too. After all, today is a day of grievance discussion. As for me – well I have a few.

Seriously Rangers. Stop getting injured. It’s not funny anymore. Every time I watch a game, someone else gets hurt. Mika Zibanejad broke his leg. Rick Nash hurt his groin. Pavel Buchnevich was kidnapped by Putin. Rick Nash hurt his other groin. Enough is enough. Quit it.

Every time the Rangers lose, half the fan base thinks the world is ending. Every time the Rangers win, that same half thinks they are true Stanley Cup contenders. Relax people. It’s an 82 game season. We all know what this team is by this point. They are a talented team up front with an All World goalie and a Swiss cheese defense. Until that changes, there will be very high highs and even lower lows. Enjoy the ride. Or don’t.

I think we’ve all said what needs to be said. No matter how you think it needs to be fixed, it’s clear the defense needs a major upgrade. I don’t care if you need to clone Ryan McDonagh twice, just fix it.

I disabled this feature on comments because people weren’t mature enough to handle it. Someone said “Good win” and got 15 thumbs down? Seriously? Grow up. How about we vote based on the comment and not on who posted the comment? You know, do this like mature people, instead of petty buffoons who can’t stand it when someone disagrees with them.

The feature is available on posts. Until I get a sense that people won’t commit buffoonery with it on the comments, it’s remaining disabled.

He’s been with the team for seven years. Yeesh.

Until Grievance #3 is addressed, The King will not win a Cup in New York. There. I said what everyone else is thinking. Sucks, doesn’t it?

So what are your grievances? Fire away in the comments. Remember that this is a day meant for airing grievances, even if you don’t agree with what others post.