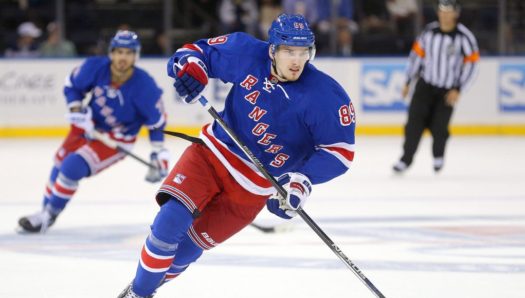 We here at BSB have been granted an exclusive story. We have it on good word from Russian Intelligence that Russian President Vladimir Putin has actually kidnapped Pavel Buchnevich. At the moment, the reason is unknown, but we have theorized that it has to do with Putin’s vision of recreating the dominant Soviet team from the 1970’s.

Buchnevich has not played a game for the New York Rangers since November, with the team placing the rookie on IR with “back spasms.” It looks like this was meant to be taken literally, as Buchnevich experienced a “spasm” so bad he’s “back” in Russia. Our source has stated he is chained to a radiator in his apartment, forced to eat beets, dill, and herring to stay healthy while being corralled to and from practice by an army of bodyguards.

Meanwhile, Buchnevich’s agent is feeding misinformation to the New York media, as highlighted by Larry Brooks reporting that the young Russian is set to return in mid-January. This information comes as a PR cover up, and our Russian Intelligence source has stated that Buchnevich will suffer a “setback” in early January, delaying his “return” indefinitely.

For the Rangers, this means they will be without their prized rookie and potential future star until Putin deems him unnecessary. This does not bode well, as the Rangers are already thin due to injuries, and losing their youngest weapon is a big blow to their short-term Stanley Cup chances.

But there is a bright side here. Our source, who requested anonymity, said that Putin is very fickle with his hockey players. Even though Buchnevich is under lock and key eating a diet that would make even Gary Roberts cringe, Putin has been rumored to be short tempered, throwing frozen bags of borscht at players who displease him. One poorly placed borscht bag, and Buchnevich could see himself back on a plane to the US.

Rangers fans might be waiting a long time for that, though, as Buchnevich is the focus of all of Putin’s attention. Per our source, Putin said of Buch, “He’s the future of this club. It’s why I sent my best guys after him. They used their best tricks, luring him into the van with promises of glory, free hockey sticks, and 1% of James Dolan’s net worth.” If that is true, then Putin won’t be firing a borscht bag his way any time soon.