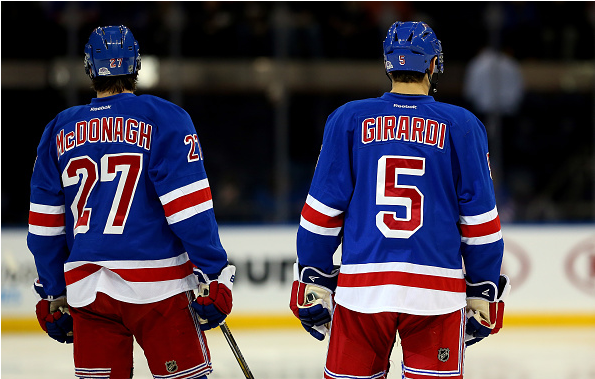 You know it’s time to dust off your laptop and write a post for Blue Seat Blogs when there are jokes on the Internet about your location, your health, or doubts as to if you ever existed at all. Truth be told, I am not an alter ego for Dave Shapiro.

For new readers of Blue Seat Blogs, allow me to re-introduce myself, my name is HOV, H to the O V, The Suit. I like bourbon, matters related to bespoke tailoring, and hockey. I use a pseudonym for various reasons. I (sort of) invented blogging about Hockey Systems. Now Steve Valiquette has far surpassed me and did so with an air of Greenwich snobbery that even I can’t replicate (jk love you Vally).

Anyway, it’s been a while since I created internet, so I have decided to share a few views on things related specifically to our defense, because defense wins championships or something.

Did AV botch the development of McIlrath?

A frequently asked question over the last few weeks…

AV was hired to win a Cup. Therefore, he needs to be a maximizer of young players, not an incubator for young players. If you don’t believe me, just look at his past behaviors. Kreider, Miller, etc. were all given a very short leash in the early goings of AV’s tenure. When they failed, they were sent down. Vesey, Buch, etc. are all here because they are ready to play and will stay in NY as long as they continue to create offense.

All of which leads me to McIlrath. Dylan was drafted for an NHL style that is quickly becoming obsolete.  His foot speed and think speed are not quick enough to play in a man-on-man defensive zone system at the NHL level. Maybe he’s a 6 or a 7 in a pure zone system, but even there I’m skeptical, as most teams are going the hybrid route these days. None of this is on AV, as long as you agree that the end goal is a Cup this season.

Should the Rangers protect Kevin Klein?

David and Justin covered this recently. My take? Right-handed defensemen who can actually play man-on-man and can put the puck in the back of the net don’t grow on trees. He also has a reasonable cap hit ($2.7M) through 2017-18. These things together should make him a keeper under a multitude of scenarios.

The question for me is not so much about Kevin Klein as it is about our long-term options on the right side other than Kevin Klein. Right now those options are a) Girardi, who has rebounded this year but is not a long-term solution and b) Clendening, who is an RFA and a fringe NHLer at this point.

Could we win a Cup without an upgrade? Sure. But I think our likelihood of being in contention year in and year out would dramatically improve if we have a right-handed top four defender and Kevin Klein.

Can we expect Girardi and Staal’s rebound seasons to continue?

Staal is an old 29 and Girardi is 32. Expecting more from this combo is unrealistic. Staal can still defend in one-on-one situations, but his ability to move the puck north will depend on the commitment of his back-checking forwards.

Right now the Rangers weak-side wingers are getting back and helping out and this is benefiting Staal, who can make the short pass. However, as the season goes on and teams adapt to our play, or our forwards’ commitment starts to wane, it will be interesting to see how this affects Staal’s ability to move the puck.

Girardi is an entirely different animal. He’s still shaky in one v one scenarios, but he’s been more decisive with the puck and that’s helping with his passing and his shooting. These aren’t traits that usually dissipate unless you start missing games and get out of a rhythm. Health is key here more than systematic adjustments.

Either way, their play is important in our quest for the Cup. A step backwards with these two would no doubt hurt our ability to contend. Let’s hope it doesn’t come to that.