For many years now on this site we’ve talked about the Rangers mediocre power play, what’s wrong with it, and what we’d do to fix it. Fortunately for the Rangers, recently history suggests that you can win a Stanley Cup without an elite power play. The LA Kings proved this twice (sad face), as have the Bruins and the Penguins.

The penalty kill is a different story. None of the clubs mentioned above had a PK rate under 83% in their Cup winning seasons; same goes for the Chicago Blackhawks and their runs.

This season the Rangers are only killing off 77% of their penalties, which is good for 26th in the NHL. That does not bode well for any team trying to compete for a Cup, let alone one currently in the top half of the League in minor penalties. And no, Eric Staal doesn’t help you there.

In order for the Rangers to have a fighting chance this postseason, the PK needs to get fix. Here’s three issues the Rangers need to address to fix the kill.

As I’ve said on many a blog, it’s not just about results, it’s about the process. Despite what #fancystats folks will tell you, winning face-offs is good process, especially on the penalty kill. Right now, the Rangers are not good on the draw. To date, they’ve only won 47% of their face-offs on the PK.

Dom Moore takes the most draws on the PK and is winning 48% of them. Derek Stepan is next in line and only wins 40% of face-offs. Internally, there aren’t a lot of solutions here. I’m not a fan of Stepan on the PK in general and perhaps Oscar Lindberg would be a better option, as he’s decent on the draw (close to 50% all situations) and doesn’t get much PK time. 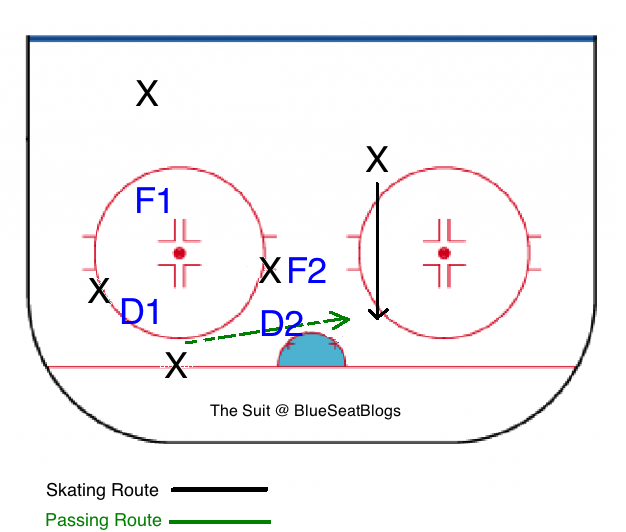 In today’s NHL, most teams are employing some variation of the 1-3-1 (pictured above). The Rangers choose to counter the 1-3-1 with an aggressive version of the diamond.

The Rangers set up their diamond similar to how they run their D-zone system at even-strength, in that some skaters play man-on-man, while others play zone. As I’ve stated in the past, I don’t think this is a good system for the Rangers based on the personnel they have, especially on defense.

The issue with this PK is similar to our issues at even-strength, our Ds are still hesitating with when to pursue vs. when to contain. These mix ups are causing us to routinely give up those low lateral plays, which are death for a goalie.

This one’s against Chicago. Low lateral pass. We don’t block it. Goal.

Palmieri ties the game at 2. Terrible defending from the Rangers pic.twitter.com/AgO8w8oFat

This one (above) was against the Devils. Same play.

Look, I’m not just cherry-picking gifs. If you look up our PK stats from war-on-ice.com you’ll see that Girardi and Staal are giving up 18 and 21 (respectively) ‘high danger scoring chances’ per 60 mins of ice time on the PK. Meanwhile, McDonagh is only giving up 14 and change and McIlrath only 9 in a very small sample size, but you already know where I’m going with this right? 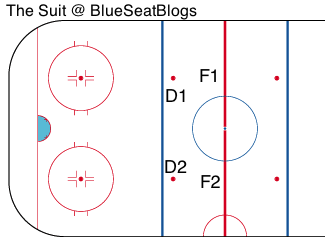 Finally, one of the biggest issues on the PK is opposition entries. Here, the Rangers employ a retreating box, which is designed to force the other team to dump the puck in.

In theory, I get why the Rangers would use this tactic, as most teams have a smaller chance at getting a shot on goal after a dump-in vs. attacking the blueline with speed. The problem is this strategy puts the onus on your defenders, since someone has to retrieve a dump-in. And we’ve already highlighted the issues with our defenders.

Instead, I’d rather AV run a T-forecheck, which is what Torts employed, or some other more aggressive tactic in the neutral zone that would put the onus on our forwards to create turnovers, but that’s just me.

In the end, there are some common themes here. We keep running into the same issues whenever we talk about the path towards the Cup. The solutions are simple; either stick with it and hope things pan out, trade folks, or make tactical adjustments. You know where I stand.