It is often said in the sports business that the third season in a coach’s tenure is sometimes their most difficult. Players tend to tire from the same voice. A coach’s tendencies with x’s and o’s tend to become a little stagnant and predictable for the opposition. Players end up unhappy with their roles and can sometimes lose hope in gaining more responsibilities. The list goes on.

It is at this critical juncture, coaches need to find ways to make adjustments to their system and how they manage their bench.

The Rangers seem to be hitting that lull. Their scoring chance differential at even strength is a -128. That’s by far the worst differential this organization has had since they started tracking the stat 10 years ago. Whether this is due to players tiring of AV or not is anyone’s guess. Regardless, the roster is what it is and adjustments have not been made.

Fortunately, the Rangers lucked out some wins at the beginning of the season despite not playing defense, so there is still plenty to salvage from this season. However, whether or not the Rangers turn it around comes down to one simple question. Will Alain Vigneault adapt?

In this humble suit’s opinion, he has to. We can lament certain players on this roster all we want, but at the end of the day, this is more or less the same roster that almost went to the Cup last spring and very few of those struggling are outside of their prime.

Here’s several adjustments AV should make to get more out of this roster.

1) Give More Minutes To Those Who Have Earned It

Back in October, one of the first things I wrote this season was that Yandle should assume more responsibility. Unfortunately, that hasn’t happened. He’s still getting bottom pairing minutes and second fiddle power play time.

I won’t recap that post here, as it’s pretty obvious and has been talked about to death around these parts. I will say that now, it’s not just Yandle. There are a handful of other players that deserve more.

First, let’s give Mats Zuccarello more ice-time. He’s producing almost a point per game and he’s not even in the top 70 forwards in ice-time. Brass? Same issue. He’s getting around 17-18 mins per game, while the Krejci’s and Bergeron’s of the world are getting over 20.

On defense, other than Yandle, Klein has been our best all around defensemen this season. At the least he should get more of a role on the PK, where he was a horse for Nashville. He led their D in PK time, even surpassing Weber and Suter who were playing 26 mins a night. And yet McDonagh, Girardi, and Staal are all ahead of him.

2) Accountability Should Extend To The Whole Roster

I’ve always been a fan of coaches who give and take responsibility based on performance, not a player’s resume. This was one of the things I disliked about Tom Renney and appreciated about John Tortorella.

AV’s strategy appears to be more akin with the former. It seems veterans and skill players get a hell of a lot more rope under this regime than up and coming players or depth forwards / defensemen.

McIlrath and Etem are in and out of the lineup, despite performing well and having upside. Meanwhile, Kreider coasts on the backcheck and is still racking up penalty minutes. Girardi? You get it.

Man-on-man coverage fits this roster like an American pub would in Mosul.

For those of you unfamiliar with defensive zone schemes, I suggest you read up on my post here, which covers the x’s and o’s extensively. In the meantime, the basis of man coverage is to stick with your check like white on rice. However, in order to execute man coverage successfully, you need defensemen who can think and skate really fast.

Right now the only defensemen on the roster that can play this style consistently are Keith Yandle (which is ironic given his limited ice-time) and Ryan McDonagh. Girardi has never been a great skater. Staal and Klein have been inconsistent at executing this over their careers. Boyle is old and spent a career in zone schemes. McIlrath is still a wild card. 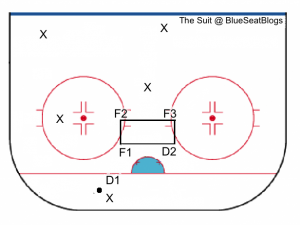 The alternative is a zone defense, which means skaters defend home plate (the scoring chance area), rather than chase guys around the zone. Tortorella employed a more conservative variation of zone defense during his tenure here called a collapsing box (pictured above). However, there are other variations of zone defense that can be a little more aggressive (e.g., expanding box, triangle +2, etc.) without hanging your goalie out to dry.

In my opinion, in order for man coverage to really work long-term, there would need to be a massive overhaul to our roster. Good luck with that.

Ultimately, I don’t think these changes are that drastic and should be considered by the coaching staff. But then again this is AV we’re talking about and he has a history of not altering his approach. It would be one thing if we were losing a lot of 1-goal games, but still playing even or plus hockey scoring chance-wise, but we’re not, we’re getting smoked. Forget the results, the process is broken and needs fixing.