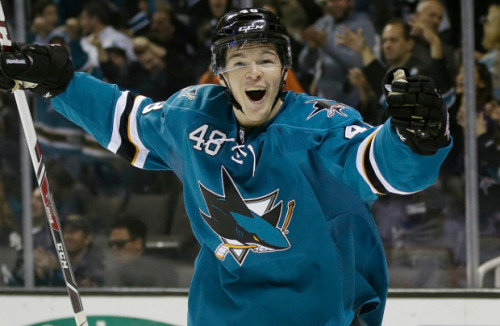 It’s only a matter of time until the Rangers deal Cam Talbot, and the return looks like it’s going to be a slam dunk. Yesterday TSN’s Darren Dreger reported that the Blueshirts have already turned down two second-round picks for Talbot, indicating the team believes it can fetch even more for the 27-year-old netminder.

The Edmonton Oilers, Buffalo Sabres and San Jose Sharks are rumored to be the three teams most interested in Talbot, with the Oilers believed to be the frontrunner to acquire his services. There’s some debate over whether Edmonton has offered its first-round pick, No. 16 overall, but it’s a fair assumption that the Oilers have at least dangled No. 33 and probably a prospect. There’s also been considerable speculation that Edmonton would consider parting with disappointing 2012 top pick Nail Yakupov given the team’s glut of young forwards.

But the Rangers’ ultimate target should actually be another 2012 first-round pick – San Jose’s Tomas Hertl. You remember Hertl – he’s the guy that did this to New York:

It’s amazing that any of those potential deals could be on the table given the usually pitiful returns for goaltenders on the trade market, but overpaying for a proven backup that a team believes could be a stud No. 1 isn’t without precedent – in 2011 Colorado acquired Semyon Varlamov for high first- and second-round picks and in 2013 New Jersey gave Vancouver No. 9 overall for Cory Schneider. There are a number of goalies available this offseason, but it appears that Talbot is far and away the top preference of goalie-needy teams. And as such, Rangers GM Glen Sather seems to hold all the cards.

So is Hertl an unrealistic target? Probably. But there are reasons a deal could make sense for both sides.

Hertl dazzled as a rookie with 15 goals in an injury-shortened season, but he succumbed to an ugly sophomore slump this year that has the Sharks a little uncertain about his future.

San Jose reportedly traded James Sheppard at the deadline in an effort to give Hertl more playing time at center, but it now appears that Hertl has been passed over on the depth chart by Chris Tierney. Hertl also provided disappointing results at left wing this season, so it’s unclear where he fits going forward.

For all their warts the Sharks do still boast an enviable group of top-six forwards, starting with Joe Thornton, Patrick Marleau, Joe Pavelski and Logan Couture. Youngsters Matt Nieto and Melker Karlsson, along with Tommy Wingels all performed well at times alongside those stars season, and 2014 first-rounder Nikolai Goldobin will surely join them in short order. In other words, like the Oilers, the Sharks are equipped to trade from a surplus.

What San Jose lacks, obviously, is a franchise goaltender. And if they believe Talbot to be that, then there’s a starting point.  But the Sharks also have a lot of work to do along the blueline, where only Brent Burns, Marc-Edouard Vlasic and Justin Braun are signed for next season, with restricted free agent Brenden Dillon also likely to return and Mirco Mueller in line for a full-time job. San Jose has cap space to spare and could choose to re-sign UFA Matt Irwin, or chase one of the other defensemen on the free agent market like Mike Green or Christian Ehrhoff. Or, perhaps they could be interested in Kevin Klein – who the Rangers also need to move and has a very reasonable contract. For a team with a new coach and whose stated goal is to reload rather than rebuild, shoring up those two positions before the draft while maintaining cash to make further additions in free agency could be very appealing.

Like Yakupov, Hertl’s early development in the NHL has been a rocky ride, but Hertl doesn’t come with Yakupov’s baggage. He also happens to be $1.5 million cheaper next season, at a time when every penny counts for the Blueshirts. Hertl has rare offensive skills and possesses imposing size, but the big concern is that he’s a poor skater. That obviously clashes with the team’s identity, but perhaps his strengths, youth and affordable contract make up for it. And if the Rangers view Kevin Hayes’ long-term future as a winger, then Hertl could slot in as a third-line center behind Derick Brassard and Derek Stepan and potentially give the Blueshirts three very effective scoring lines:

According to reports, the Rangers have primarily been targeting draft picks and prospects in return for Talbot and Klein. However, at just 21 years old, Hertl is still younger than many of the prospects New York could hope to obtain, so he could help both now and for the future. Sather has precious little room to improve his roster given the cap crunch, but acquiring Hertl could do exactly that without creating any more financial trouble. Hertl will be a restricted free agent next summer, when the Rangers will again be in major cap trouble, but at least he’d still be cost-controlled, so the Blueshirts could keep their roster largely intact.

Clearly, this is a long-shot for many reasons, but as the hours tick down until the draft and Sather continues to hold out, it seems Talbot’s price tag is only increasing.