New look powerplay a breath of fresh air for the Rangers

If you’ve been a Ranger fan for a while, then you know that once Jaromir Jagr, Michal Nylander, and Martin Straka departed New York, the powerplay has been atrocious. It got to the comical point where fans were screaming to just pass on the powerplay and play 5v5 hockey instead. It’s something that really hampered some of the pre-Alain Vigneault teams.

When AV came on board with Scott Arniel, the Rangers started running a hybrid 1-3-1 powerplay, a nice variation on the usual umbrella that the Rangers used to run under John Tortorella. Last year’s powerplay was frustrating, but luckily the second unit (Mats Zuccarello-Benoit Pouliot-Derick Brassard) found enough chemistry to carry them.

With Dan Boyle in the mix, the Rangers finally have enough weapons on their first powerplay unit to be a legitimate threat each game. The great part of the 1-3-1 is that it can be run from either off-wing or up top. Boyle, Martin St. Louis, Derek Stepan give the Rangers three legitimate shot and passing threats from those three zones.

But it goes beyond the theory of the 1-3-1. All too often, the Rangers would –for some reason– have one of their defensemen in the corner where the blue line meets the boards. Dan Girardi is one of the more frequent offenders here. You can’t generate much offense from there. Boyle runs the powerplay from the mid-point:

From here, Boyle has three options, and the Bruins are forced to try and cover all three. Boyle can move the puck to Zucc on the left, to Brass (I believe) on the right, or attempt a shot on net through the seam in the middle.

The reason why this is so effective, or at least more effective than in the past, is because the Rangers have finally developed that net presence in front. It’s either Rick Nash or Chris Kreider, but one of them is in front.

In the case below (from a game against Ottawa), it’s Nash. Nash draws he attention of one of the two low defenders, depending on puck location. In this case, the Sens defender circled goes out to defend the potential shot from Brass. 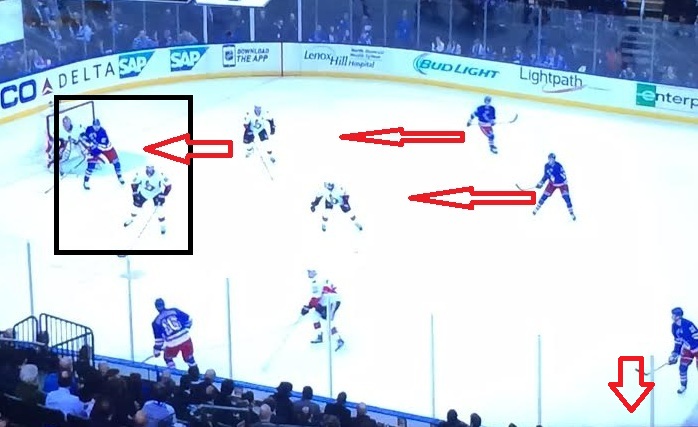 This opens up the passing lane to Nash’s backhand (you can see his stick positioned in that manner).  The red arrows show the general shift the Rangers make with the puck along the boards. MSL cuts to the back door, Stepan to the high slot, and Boyle to the corner as a safety option. The Sens penalty killer at the back door has to cover both Nash and the cutting MSL. The defender in the middle has to defend the cutting MSL and Stepan at the high slot.

There are also changes coming from having Boyle start the rush and gaining the zone. From the below, we see that Boyle started the rush, and as he sees the defensive forecheck, he surveys his options. 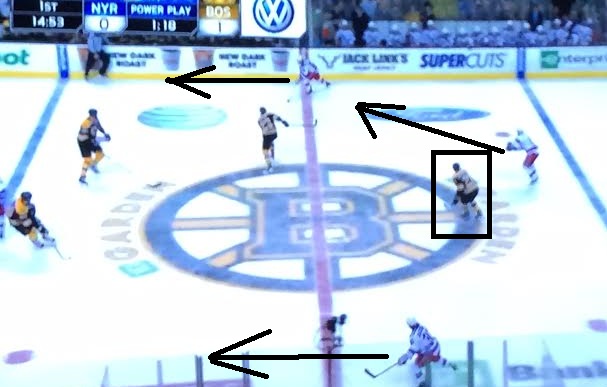 Here, Patrice Bergeron took the passing lane to Zucc. Boyle then goes to Plan B: Finding MSL at the far boards. He’s a proficient passer, so it’s a tape-to-tape pass, and we have a controlled zone entry. Plan C here is to gain a step on Bergeron –since he’s partially committed to the Zucc passing lane– while Zucc continues up the near boards, and hitting him with the pass then.

Off a different powerplay in the same game, the Rangers gained the zone, and Boyle set up at the mid-point. Nash cut down the weak side, and since Bergeron had to respect Boyle, the passing lane was open to Nash for a chance. 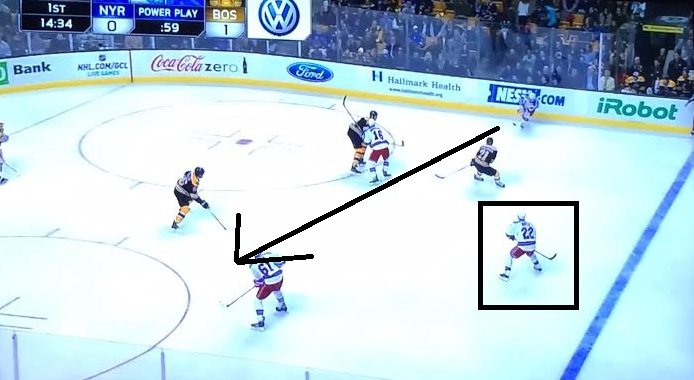 Options is the new word for the Rangers powerplay, and to date it’s been helping them click at a 19.3% clip. For fans used to yelling “SHOOT,” it may not solve all the issues, but the puck movement, shot generation, and success rate are all a breath of fresh air.