One of the bigger stories out of last night’s game was Martin St. Louis and his move to center. Commenter Ranger Fan in Boston emailed me about the biggest differences that MSL will face in the transition, and while MSL covered the higher level points on TV, I figured it would be nice to break it down into how his role changes in Alain Vigneault’s system.

As MSL stated in the first intermission, the biggest change for him would be in the defensive zone. Wingers, generally speaking are playing zone defense high in the zone looking to transition to offense while covering the point. Naturally, the location of the winger changes based on puck location and situation, but for the most part wingers are up high. Centers, on the other hand, are more engaged low in the zone, sticking the other team’s center in the zone.

That’s an over simplification of the difference between wing and center, but we can go a bit further into how his role changes for AV’s strong-side overload/man coverage hybrid the Rangers use in the defensive zone. 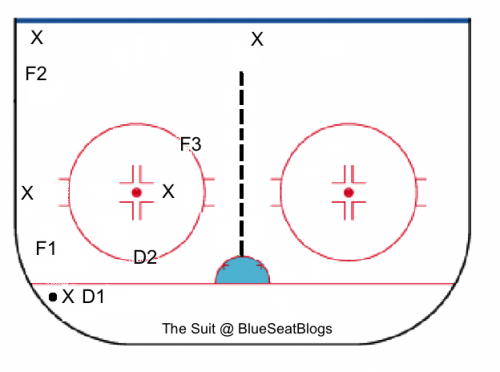 The above picture represents the basic coverage of a strong side overload. This is the strategy the Rangers use in the defensive zone when the puck is above the goal line. Previously, MSL would be either F2 or F3 in this picture. F2 covers the strong side point, while F3 covers the pass across to the weak side slot. F1 is the more engaged forward, in on the defensive play. That is usually the center. His role is to stick the pass along the boards, while D1 pressures the puck.

MSL would switch to the F1 position here. The risk is that, since MSL has played his entire career as a winger, his habit is to cover the point or the weak side pass. It takes a lot of time to retrain the brain to break that habit. 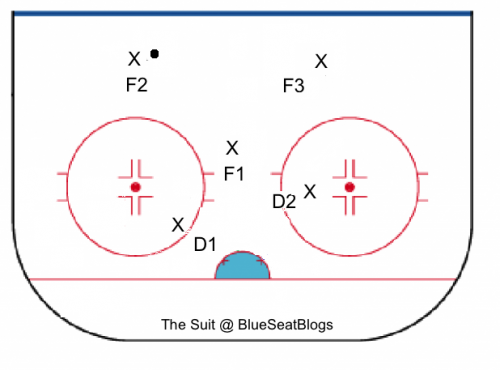 When the puck is below the goal line, the Rangers shift to man on man coverage (pictured above). Notice F2 and F3 are still up high covering the points. F1, MSL’s new role, is in the slot, or wherever his man (the opposing center) is.

The biggest risk for the Rangers and MSL would be the transition to and from man-to-man. It can be incredibly confusing if you’re used to something completely different. For someone who has spent his entire career covering the point, he would need to quickly adjust to locating his man, sticking him when the puck is below the goal line, and pressuring the boards on the overload when the puck is above the goal line. It’s not an easy task.

Offensively, the biggest difference for MSL will be on breakouts. Usually, wingers will fly the zone, looking for the defense or a center to hit him with a pass. In the diagrams on the breakout page, MSL’s role is again F2 or F3. As F1, he would be looking to hit his wingers in stride. That shouldn’t be too difficult, since MSL is a pretty great passer to begin with.

One other thing: It’s rare that you see centers under six feet tall. MSL is 5’6″. If there is anyone that can pull it off successfully, it’s MSL.