Diving deeper into the puzzling ice time for the fourth line 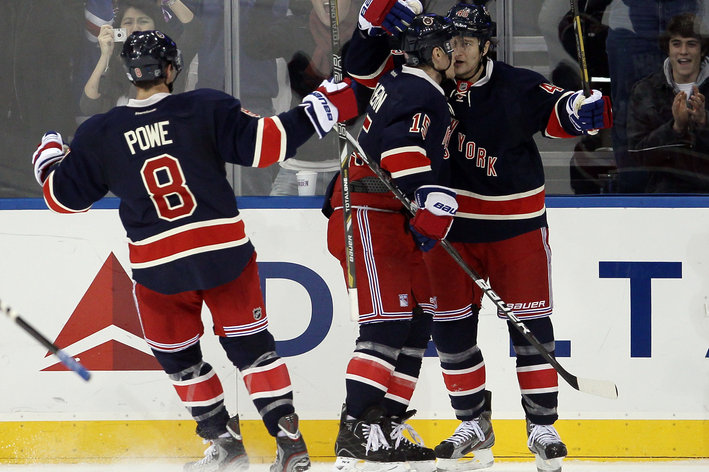 Depth has been a discussion point around here since before the lockout, to the point where we have too many posts to link to when we bring it up again. Despite an injury to Arron Asham, the Rangers have more useful depth this year than they have had in years past. They have a fourth line capable of eating 10-12 minutes of ice time per game when healthy, with some of that coming on the penalty kill. Depth is critical for a team like the Rangers, who will need all four lines to make a deep Cup run.

Despite all this, the Rangers fourth line barely saw seven minutes of ice time each. Eliminating Stu Bickel from the equation, as he’s only in because Asham is out, it makes you wonder why there is no trust from the coaching staff. Don’t get me wrong, this isn’t a post bashing anyone –as you all know, we love Torts here and aren’t afraid to show it– but it’s still worth asking why these guys don’t get ice time.

Darroll Powe and Jeff Halpern get key penalty killing time –and did so incredibly effectively last night– but barely get any shifts at even strength. The two of them received nine shifts each for  the game last night, which includes their penalty killing shifts. Even in the win against Tampa Bay, they didn’t sniff ten minutes of ice time, although they played more shifts.

Some of this is justified by their underlying metrics. Both Powe and Halpern get your typical fourth line QoC assignments (Halpern: -.120, Powe: -.182), so that’s not surprising. What is surprising is their lack of efficiency and effectiveness, specifically Powe. While Halpern’s RCorsi of -6.6 (-2.6 CorsiON) isn’t great, it’s not exactly awful either. Powe is the worst on the team at the moment. His -24.0 RCorsi is awful, but is compounded by his -20.04 CorsiON, making him incredibly inefficient at even strength play thus far.

Now, those Corsi numbers are a bit skewed due to the number of shifts they start in the offensive zone. These two are the new Ruslan Fedotenko/Brandon Prust combination for the Rangers. Halpern starts 27.6% of his shifts in the offensive zone and Powe 31.8%, with these percentages representing starts after a whistle. It’s incredibly difficult to have positive puck possession numbers when you start 70% of your shifts in the defensive zone. In that regard, I’m willing to dismiss Halpern’s Corsi numbers entirely, and give Powe a bit of a reprieve (although his numbers are terrible).

But if Torts trusts them to start those shifts in the defensive zone, why aren’t they getting more playing time? We’ve heard Torts mention Corsi in his pre-game interviews, so is it his monitoring of that metric? Or iIs it strictly because they are being weighed down by the presence of Bickel on their line? It could be the latter, as Asham started just 23.9% of his shifts in the offensive zone. Bickel on the other hand is getting 46% of his starts in the offensive zone. That’s a huge discrepancy.

So let’s eliminate the Bickel factor here. To do that, we need to find games when both Asham and Powe played together. Considering their injuries, it’s actually fewer games than you might think. In fact, they’ve only played six games together (2/5, 2/7, 2/10, 2/12, 2/14, 2/17). The Rangers record in that stretch: 4-1-1. It may be a coincidence, but the ice time shows us other wise. Except for the 2/17 Washington game (and the 2/14 Islander game where Asham lost a fight five minutes in and didn’t play again), both guys played around 7-10 minutes per game. Halpern got over 10 minutes of ice time in each game (except for that Washington game).

Torts isn’t the kind of coach that is going to roll his fourth line with regularity. He believes in rolling his top guys, and bringing out his fourth line sparingly. That said, Torts is also the type of coach that will recognize the strengths of his players, and play them in that regard. For Halpern and Powe, it’s their ability to take crucial shifts in the defensive zone and hold the fort. Asham plays into that as well. Bickel does not. His zone starts don’t fit that equation.

We are all looking at the ice time disparities and questioning why these guys aren’t getting ice time. The answer appears to be simple, but not so simple at the same time. Until Asham gets healthy (these must be some epic back spasms), the Rangers will be faced with dressing 11.5 forwards, and Halpern/Powe will need to get used to having their ice time affected by having a defenseman playing forward with them.