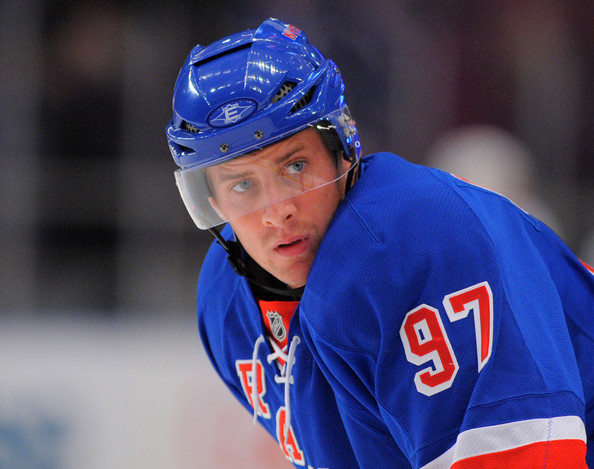 Matt Gilroy may not be the most complete defensemen. In fact, he isn’t a top-four defenseman at all. But this isn’t the same Matt Gilroy that came to the Rangers after college and was immediately exploited for not being NHL ready. Gilroy has some NHL experience under his belt now and it’s showing, as Torts has been playing Gilroy over ten minutes per game in the absence of Dan Girardi.

It’s interesting to see Gilroy getting the playing time over veteran Steve Eminger, but it’s clear the coaching staff has seen something in Gilroy’s game that is making them rely on him more than Eminger or Stu Bickel. Gilroy isn’t without his flaws, as he does have many, but he brings more to the lineup –specifically against teams that skate well– than the other two spares.

While Bickel may have become the whipping boy around these parts, Gilroy is slowing becoming a decent bottom pairing defenseman that the coaching staff has been able to rely on. It’s only been two games, so let’s not assume he has his position solidified, but it speaks volumes that Gilroy gets ten minutes while the Eminger/Bickel duo gets less than five.

Keeping in mind the small sample size, I looked at Gilroy’s metrics from last season with Ottawa. They aren’t impressive (-.048 QoC, 0.0 RCorsi, 51.3% OZone start after a whistle), but they’re not exactly terrible either. Aside from the fact that this is the first time I have ever seen a player with an exact 0.0 RCorsi, his number show that he can at least be an even player in regards to puck possession as a bottom pairing guy. Remember, bottom pairing players don’t draw the tough matchups.

We can chalk up Gilroy to the pleasant surprise column for the time being. It’s a small list, with just Taylor Pyatt and J.T. Miller on that list so far, but it’s a better list to be on than some of the others. Gilroy may not be a long-term solution, but he is earning his ice time with decent play, and that’s all anyone can ask for from a bottom-two defenseman.