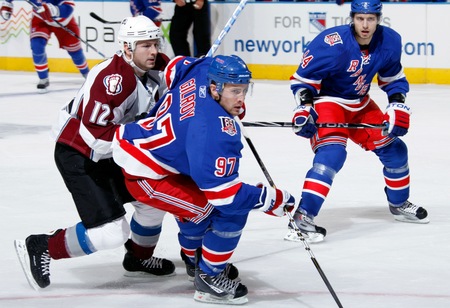 Matt Gilroy is back on Broadway.

When Matt Gilroy re-signed with the Rangers organization (currently spending his time with the Connecticut Whale), it was presumed that if/when the NHL season begins, Gilroy will be back with the NHL club. It’s not as simple as calling him up, but that actually plays into the Rangers’ favor.

Gilroy is currently inked to an AHL contract, meaning that he would have to sign an NHL deal with the Rangers before he can skate with the club post-lockout. While that’s a bit of a bump in the road in that Gilroy can’t be immediately called up, it does help the Rangers since Gilroy would need to pass through waivers. It’s semantics, but the end result is still Gilroy with the Rangers, filling a role of bottom-pairing and/or depth defenseman.

It wasn’t that long ago that Bickel was playing four minutes a night and Eminger was sitting in the press box watching the Rangers fall to the Devils in the Eastern Conference Finals. With five defensemen playing 20 minutes, and two playing 30 minutes, fatigue hit the Rangers. Even though Bickel wasn’t playing, coach John Tortorella felt that picking Bickel’s “jam” outweighed Eminger’s marginally better skating ability.

It was an area they needed to address in the offseason, and while Gilroy may not be the best option to fill a hole, he does add some semblance of depth.

With Gilroy on board, the Rangers now have three guys on the blueline that they can use for matchups. It’s amazing how much the Rangers missed a sixth defenseman who can skate with the quicker fourth lines. Ryan Carter and Stephen Gionta burned the Rangers time and time again. Think a bottom pairing –one that wasn’t dealing with Zach Parise and Ilya Kovalchuk– would have helped there?

The addition of Gilroy is a small addition that may have a big effect on the defensive depth for this year. It gives Torts the flexibility to play the matching game with his opponents. Bickel gives them physicality, Gilroy gives them skating and offensive ability, and Eminger gives them well-rounded defense. Three defensemen, three unique styles of play. Flexiblity at its finest.