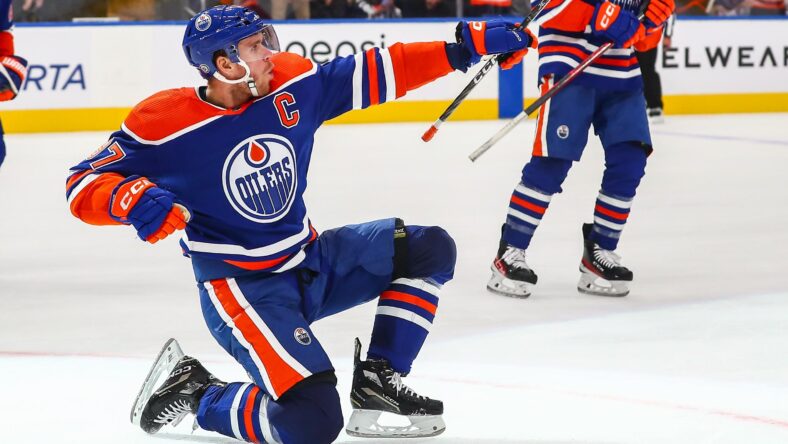 A new week, plenty of NHL action later tonight, and plenty of bets to go around! Below are a few that are very intriguing to me. Let’s see and the selections and break down the Blue Seat Bookie picks, shall we?

It’s no secret the Devils have been on a historic role winning 12 straight sweeping both western and eastern Canada in the process. So why the Oilers? Connor McDavid. We are looking at a pace of scoring with McDavid that could put him well at goal-a-game pace. He’s currently at 16 in 18 games along with 18 assists. Leading the NHL in scoring, and with Draisaitl at his side, I look at them to finally be the ones to end New Jersey’s epic streak.

The Oilers will of course have their work cut out for them, but this is a team that just had a big win of their own against the Vegas Golden Knights defeating them in OT in large part due to an incredible goal by the aforementioned Connor McDavid, plus Stuart Skinner has shown capable to steal a game. This will be a must watch game on Monday Night.

Pull up the Covers: Record 0-2

Other than the Devils, is there a hotter team in the NHL right now than the St Louis Blues? Going from a severe losing streak to now winning their last 6 games in a row, they are a team firing on all cylinders. From Pavel Buchnevich, to Ryan O’Reilly, to the dynamic Vladimir Tarasenko, they are scoring and are scoring in bunches at that. They will be facing a team that has one of the worst defense’s and who have surrendered 34, 32, 33, and 39 Shots on Goal in 4 of their last 5 games. Look for that trend to continue as the Ducks will be one of the teams in the Connor Bedard sweepstakes.

The Canucks are an absolute mess, they are sloppy defensively, their goaltenders can’t make saves, their forwards are inconsistent as anything, and their team president is creating headlines by throwing his coach under the bus any chance he gets. But these are the best teams to bet the over on especially against good teams like the Golden Knights. Both Thatcher Demko and Spencer Martin have been putting up an astounding .891 team save percentage and a 3.63 team goals against average.

You know though that guys like Bo Horvat, Elias Petterson, or Brock Boeser are the kinds of players who can score for the Canucks. On the other side, the Vegas Golden Knights have been completely revitalized under the coaching of Bruce Cassidy. A healthy Jack Eichel at the forefront, they have incredible scoring depth. If Eichel for some reason has an off night, Mark Stone takes over, if Stone has an off night, Jonathan Marchessault steps up. They are winning a lot of hockey games and are scoring a lot of goals. Hammer this over as you see fit.

Disclaimer: Lines and odds from BetMGM as of 3:o0pm on 11/21/22. Odds and lines subject to change. Tyler may change his bets based on new odds and information that becomes available after article is published. If you choose to partake, please gamble responsibly and within your means! If you or anyone you know has a gambling addiction, please seek help. Gambling is only legal in the US for those 21 years of age and older.