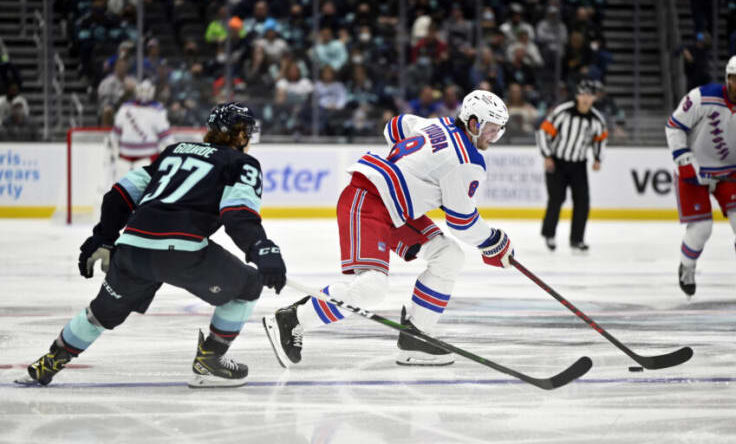 This was one of the worst games of the season. Bar none, the Rangers stunk from head to toe and allowed the Seattle Kraken, in long stretches out skate, out shoot, and out possess them. Out of 18 games, this is now the 3rd game of the year where the Rangers come out looking really bad in all facets. There is plenty of time to right the ship, but the Rangers cannot afford to let points slip away. Getting the OT loss point was important, but they need to find ways to accrue 2 points on a nightly basis against bad teams. Even if you are someone who looks at the Rangers process game in and game out, this was a horrendous game.

The only positive from the night was the play of Igor Shesterkin; who is the only reason that the Rangers leave Seattle with a loser point. Stopping 29 of 32, it’s safe to say he’s back. And when Igor is playing to his ability, that means the Rangers for whatever reason cannot also dominate puck possession, and score at even strength.

Both of their goals tonight came on power plays. Granted, that’s what their power play is designed to do–get them back in the game when the opposition takes a penalty–but it is no formula to sustained success in this league. One can only hope that as Vitali Kravtsov comes back that Gallant reunite Lafrenière and Kakko into the top six because the Kid line did nothing tonight.

Zac Jones should probably get into the lineup again. Libor Hajek has been fine and a nice surprise, but having another offensive minded defender like Jones would be beneficial in many ways. Once the roster is healthy, then you can truly start to evaluate what the Rangers need, even though I think it’s pretty clear they need another scorer and a defenseman.

Lastly, it is tiring that Gerard Gallant refuses to use Alexis Lafrenière and Kaapo Kakko in the 3 on 3 OT. He instead gave an offensive zone start to Barclay Goodrow, Jimmy Vesey, and Jacob Trouba. Are you trying to win the game? Or kill the clock in hopes you get to a shootout? Vesey has earned it, but it’s clear Goodrow is not a 3v3 player and Trouba is hurt. Give the time to your young, rising stars.