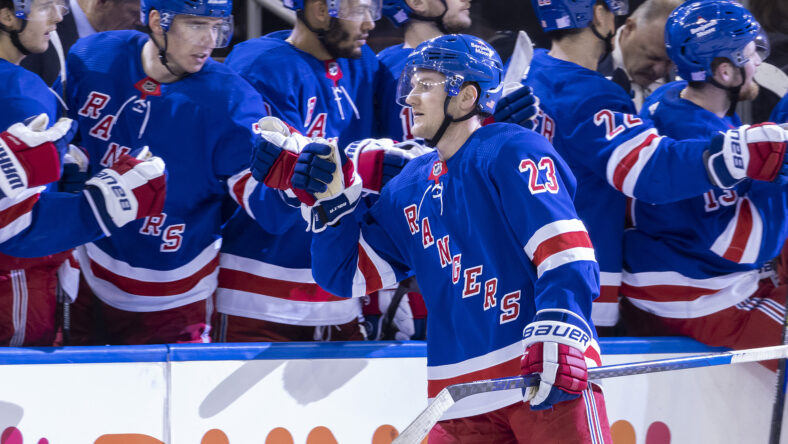 It wasn’t the prettiest of wins, but it was a much needed win needed ! As a fan, you take two points anyway you can get them in the NHL. This being the second half of a back to back with the Coyotes, Rangers should have beaten them pretty easily. But it was all Coyotes in the first, with the Rangers getting outshot 13-1 at one point. The Rangers didn’t even register a shot until halfway through the first period. Guess they had left their legs on the plane home from Nashville the night before?

With nothing much happening except for Igor Shesterkin getting quite the workload–the second most in a single period this season besides against the Avalanche–the Rangers finally started to play after they took a couple of penalties. It was as if a switch was flipped and the Rangers suddenly decided to play hockey. The Coyotes barely had the puck on their own power play. Add in a few Rangers odd-man rushes while shorthanded, and you have their aggressiveness waking the team up.

During one of these flurries, Mika Zibanejad “ran into” Connor Ingram, who was about 5 feet out of his crease, and was able to still draw a goalie interference penalty. I respect the NHL’s reasoning for wanting to protect the goaltenders as they are the key position in this sport. They are revered as much as the NFL protects the quarterbacks this day in age. However this call, when it is the goaltender who 100% put himself in that position to get hit, doesn’t make sense. Mika is taking the right angle and everything on the play.

The Rangers now have a much needed three days off. Their schedule has not been easy in a logistics standpoint, even if their opponents were subpar. There were some really tough losses during this stretch against teams that they should have beat. Hopefully those points don’t come back to hurt them when we are approaching playoff clinching scenario time.

This was a strong win and a good way though to end this stretch of play before they go on the west coast road trip. The games upcoming will be good tests as to how well the Rangers can rest and recover. The next game in Seattle could be a good test, as the Kraken been playing some good hockey of late. Regardless, this is a stretch the Rangers should (need?) to get 6 of 8 possible points.