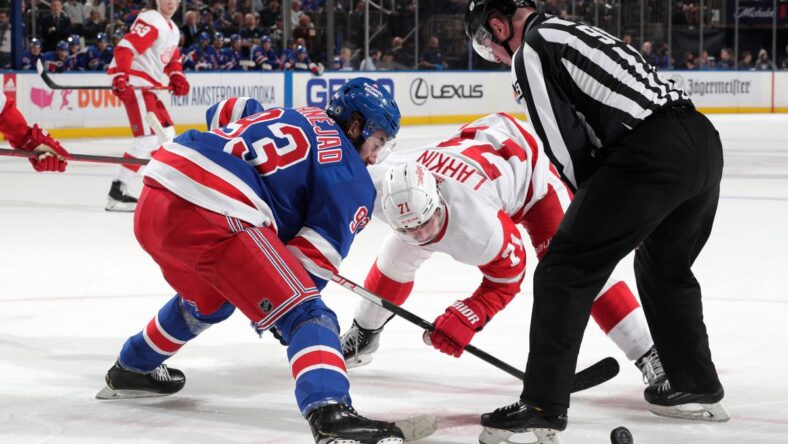 Talk about a complete 180 style hockey game. From the drop of the puck, it looked like the Rangers were going to absolutely obliterate the Red Wings–who were coming in on the second half of a back-to-back playing the Islanders the day before. After a great first period and the Rangers going up 2-0 with great goals from Kaapo Kakko and Mika Zibanejad on the power play, the ice tilted and the Red Wings completed took over the game.

It’s only 13 games into the season, but you do notice trends of the team and one is very clear for this year: The Rangers play down to their opponents. I don’t know if that’s coaching, I don’t know if that’s entitlement on the group thinking they don’t need to take teams like the Red Wings, the Blue Jackets, or the Sharks seriously, but they are lacking that “killer instinct”.

This is concerning seeing as the roster is pretty much set for the next few seasons, and this is the sort of culture you don’t want to set in when your championship window just opens up. Granted the Red Wings are an up and coming team, Steve Yzerman upgraded them in key positions, but this was a very winnable game.

It’s just 13 games in, with a backup goalie finding his game each and every start. They didn’t have Ryan Lindgren due to injury, were on home ice playing a team on the second half of a back to back, and they out-worked the Rangers. So while there are excuses, the lack of effort was alarming. What on earth is going on here?

Another deeply concerning thing that happened was after the 2nd period meltdown–where the Rangers let the Red Wings tie the game at 2 a piece–was Gallant jumbled his lines. In fact, he didn’t just jumble his lines, he took what has been great process just needing some puck luck, and took a sledgehammer to any of that good juju the Rangers had up to that point.

He benched Zac Jones in the third period for some reason, even though on the second goal it was because Jacob Trouba was soft on his man and let him get the rebound. He demoted Chris Kreider to the 4th line. Worst of all, he decided to play Adam Fox with Libor Hajek, K’Andre Miller, and Braden Schneider, taking turns every other shift. I don’t understand any of those moves at this point of the season.

Finally, last thought of the night which I eluded to it earlier, and that is Jaroslov Halak. I do not put this loss on him. He came out and put up a great performance. The team in front of him decided to stop playing in the 2nd period onward so he had no chance on any of the goals against. First goal was a deflection out front, and the second, as mentioned above, was a bad defensive coverage by Trouba. The OT winner was a 4-on-3 powerplay goal, which is almost never on the goalie.

You feel bad for Halak because he had his best start as a Ranger, and you could tell he wanted the win. He smashed his stick on the post when Kubalik scored. You can’t leave your goalie out to dry like the Rangers decided to do in this contest. Now we have the Isles coming to MSG, so this should be good…