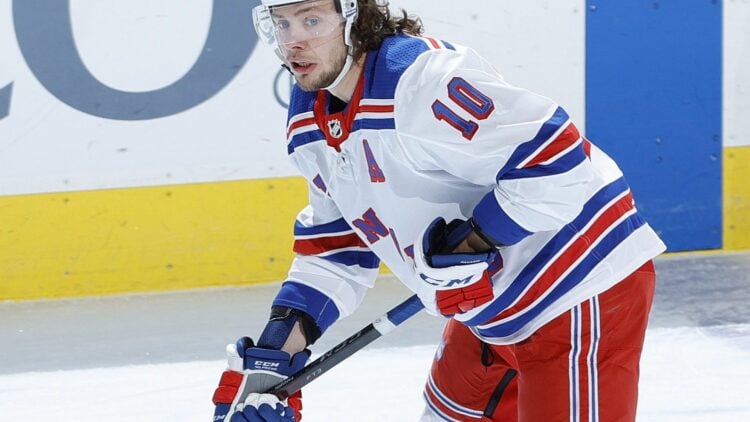 We had a little taste of DFS hockey this weekend with a pair of showdown slates between Nashville and San Jose. We reviewed the showdown strategy and how to take advantage of value players, create stacks, and try to put yourself in a position to win. The real season is about to start, with a pair of games Tuesday and a full slate on Wednesday. So let’s review our showdown strategy and how to attack the Tuesday slate. These posts are done well in advance of final lineups and odds, so be sure to follow me on Twitter. I’ll be tweeting more value plays and line shifts as we get closer to puck drop.

Reviewing what we did, where the winners were, and how we can adjust is critical to sustained success in DFS hockey. In the showdown slates, we wanted to attack the top powerplay and even strength units while finding value plays. The biggest values we found were Eeli Tolvanen and Luke Kunin, as they were underpriced for their roles on PP2 (Tolvanen) and PP1/L1 (Kunin). Low and behold, both delivered on the weekend, with Tolvanen grabbing a goal on Friday and Kunin a goal on Saturday.

Mario Ferraro was wildly underpriced because DraftKings didn’t update his price based on his TOI, and we went with him a lot on Saturday. Early on, especially in showdowns, you take what you learn about ice time and find new value plays.

The strategy paid off, as I took down 2nd place on Friday in a smaller field tournament. 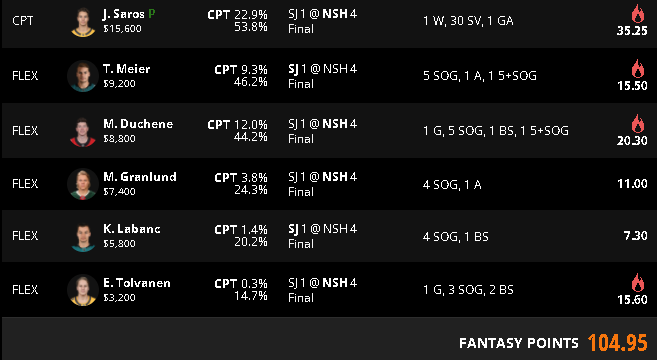 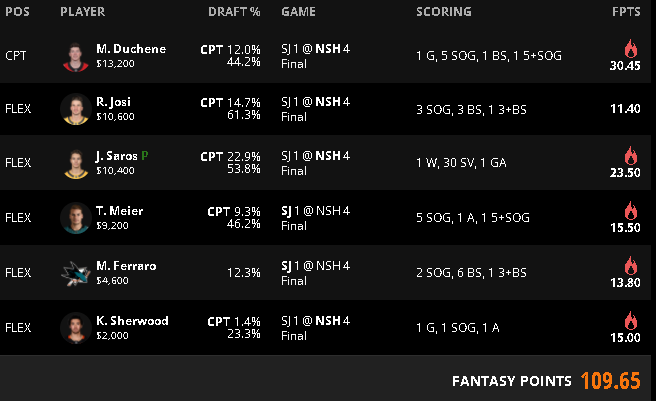 My lineup is on the left, and I did admittedly get very lucky with the empty netter, but so did the winner. If you put yourself in a position to win, you will find yourself reaping the benefits of some luck. Since it was a smaller field, this was a $100 win on a $3 entry. In total on Friday I took down $134 on $22 in entries. That’s a 6x return and a 2nd place finish on 3 separate lineups created.

“But Dave, you said don’t put goalies in captain”

Yes, you are right, and I stand by that if you’re doing just one lineup. Since I was creating multiple lineups, I wanted to give myself an out just in case Saros emerged with the shutout. Bad San Jose team, good goaltending, and an implied live (we will get to that in a second) that heavily favored Nashville had me changing up my strategy a bit. Sometimes, if a game is going to be lopsided, you want access to a captain goalie.

However, goalies are crazy expensive and really limit what else you can put in the lineup. As you can see, I had to fit in Labanc because of the increased cost for Saros at captain, and it cost me the 5 points needed for a 1st place finish. We live, we learn.

I was tempted to play the goalies initially, but I moved off the goalies once the implied lives shifted towards San Jose. An “implied live” is basically taking the spread and the betting line and combining them into a projected goals total. It implied a closer game, which we got. Add in backup goalies, and I had no goalies in my lineup. There’s value in backups, especially for good teams in good matchups with a good backup. Nashville had 2 of the 3, and the optimal captain was actually Kevin Lankinen, who stopped 31 of 33 and finished with well over 30 points on DraftKings.

That’s how DFS hockey goes sometimes. Not everything is a winner. I banked enough points with volume and value (Kunin, Mario Ferraro) to survive without losses. The strategy is still sound – target TOI and volume players at the top of the lineup. Ferraro was wildly underpriced for 20 minutes a game in all three situations, and he paid off in spades both days. Good strategy and good process will lead to better and more sustainable results.

Goalies are a very difficult position to gauge, especially early in the season when the pricing is all over the place, which you will see below.

There are just two games today: Rangers/Lightning and Golden Knights/Kings. Given the audience on this site I am issuing a warning: Do not let emotions guide DFS decisions. Find the values, and stick to what we’ve discussed about betting lines. Vegas/LA has the higher total, albeit by half a goal, but it’s still higher. But that doesn’t mean we won’t find values.

Powerplay units and even strength lines / Centers to target

Since it’s two games, we get a full DFS hockey slate: 2 C, 3 W, 2 D, 1 G, 1 UTIL. We again follow the same strategy for forwards, finding the best per-dollar plays among the PP1/L1 players that can be stacked. The below is as of Monday, 2pm, and what we expect to see at puck drop. Remember, the lines, powerplay units, and betting lines may change. You should be checking regularly, and adjusting accordingly.

Right off the bat, we find some stackable options across the board, and some have some decent value. Vincent Trocheck, for starters, is on PP1, plays with Panarin at even strength, and is the lowest priced center among this group at $5,100. Kopitar ($5,500) and Point ($5,700) are good values too. Eichel, Stamkos, and Zibanejad are all over $6,000, so you’d be paying up for them.

Panarin at $5,800 is far too cheap, and he stacks with the lowest priced offensive center on the slate. This is not emotional because they are Rangers. DraftKings priced them down for some reason. Panarin is less expensive than Fiala, Kreider, Kucherov, and Marshessault. That won’t last, and this will be the cheapest you see Panarin this season. The problem with both: They are facing Vasilevskiy. This is why they are priced down. Alex Killorn at $3,900 is very enticing as well.

But we should be looking to target the LA Kings here, with the higher scoring total, at home, and favored. From this game, we already pointed out Kopitar as a solid value, and Kempe at $5,300 is wildly underpriced for his expected TOI. Stephenson at $4,000 (plays PK too) and Stone at $5,100 seem cheap too for the bring-back stack, but it’s Phil Kessel at $4,600 that stands out to me as cheap with potential to far exceed his salary. Kessel shoots a ton and has a shot at the 5 SOG bonus on DraftKings. If he pots one with 5 SOG, that’s 19 points for $4.6K.

But before you get into specific players, let’s look at some team shooting stats from last season:

There is a ton of value in this slate, so don’t galaxy brain this.

Goalies: You only need to pick 1 of 4

Igor Shesterkin is the lowest priced starter today at $6,900. Given the Rangers are favored and they have the lower goal total, this seems like a lock. Also given some of the Rangers issues with allowing a ton of shots, Shesterkin has a shot at the 35 save bonus.

The other goalies: Vasilevskiy ($7,900) is the highest priced on the slate. Logan Thompson in Vegas is the next highest, which is a wild misprice at $7,200. Quick is at $7,600. The chalk is going to be Shesterkin since he’s the cheapest with the easiest path to a win and a high volume save count. But you can get contrarian with any of the others. Watch the lines.

After I pick my centers and wingers, I pick my goalie.

Defense – you can punt here and be fine

Defensemen are easy to punt if you find the right ones that play big minutes, block shots, get powerplay time, but are mis-priced. PK units aren’t up on Left Wing Lock yet, but you can look at PK time from last year on any website and get an idea.

Some facts to consider:

Disclaimer: Dave plays DFS hockey on his personal DraftKings account and utilizes the how to win DFS hockey strategies outlined above, but may deviate from the above strategies he advises.