How big of a hole is the Rangers top right wing spot? 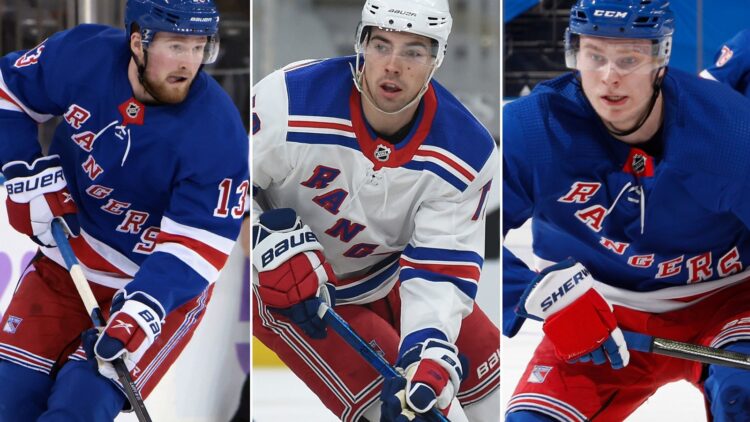 The story of the preseason for the Rangers is the revolving door at the Rangers top right wing spot. It started with Sammy Blais, we had a Kaapo Kakko blip, then Barclay Goodrow, and now it seems Jimmy Vesey has settled into the role. Vesey has evolved into more of a defensive player, and while his offensive metrics aren’t great, they are greatly overshadowed by being with the Devils last year.

This is all a product of keeping the Kid Line together, as discussed a lot recently both on Live From The Blue Seats and in this week’s Patreon post (subscribe here!). With that trio together and Vitali Kravtsov adopted by Artemiy Panarin, there aren’t many options to fill out the Rangers top right wing spot with Chris Kreider and Mika Zibanejad.

Complicating matters, as always, is what that line truly needs. Kreider is a good possession driver, but Zibanejad is not. The line can generate sustained offensive zone time, but it’s not consistent. The line is likely best complemented by a skill player who controls the play, sees the ice well, and can draw attention away from them. Naturally, both Kakko and Lafreniere, who have had success with them, fit that bill.

We all know the concerns with the revolving door at Rangers top right wing. It leaves the Rangers one player short of a complete top-nine, and puts more pressure on the middle six to create offensive zone time to keep the Rangers above water. Given how bad the second line was at creating more than just one –very good– scoring chance per play, these are real concerns.

The Kid Line, right now, is the only line we can count on to generate offensive zone time and keep the opposition pinned in their own end. As Rob said on Live From The Blue Seats, it helps grow their confidence, and could be a challenge to them to grab that spot as the Rangers top right wing.

This does, assume that Gallant runs the top 3 lines at even strength equally. Given how effective the Kid Line has been, it’s something that needs to be done to get them ice time and help manage the top six minutes throughout the season.

They just need to tread water

But even if Gerard Gallant keeps the Kid Line together all year and Kravtsov sticks with the second line, the Rangers don’t necessarily need to fill that spot immediately. Both Kreider and Zibanejad are good enough to drag someone around, most likely Vesey or Blais, until the Rangers address the need.

Treading water is fine when the next two lines are generating scoring chances and favorable offensive zone time.

One of the perks of seeing the Rangers top right wing spot open, for now, is that as of October 6th, the writing of this post, we know their trade deadline plans. They are going to go for a winger to fill out that spot. And yes, it does appear that Patrick Kane is at the top of that list. The Rangers will need to do some creative cap maneuvering this season to make that work.

We may be talking about keeping the Kid Line together all year, but let’s face it, injuries will force them to break it up at some point. The good news is that the Rangers will be fine this season, even with that glaring hole at 1RW. They are good enough to be in a playoff spot all year, possibly win the division, and then add to the lineup depending on how the season plays out.