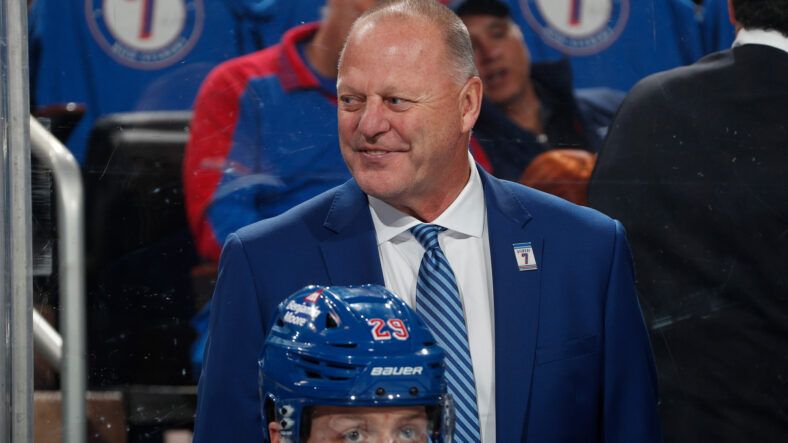 Before jumping into the more polarizing aspects of Gallant’s first season, let’s start with a big positive. Gallant runs very simple systems with the Rangers, sticking to a general 1-2-2 forecheck (with some 2-1-2 at times) and a zone defensive zone system. It wasn’t a consistent effort, and more on that below, but it’s simple and it worked.

When the effort was there, the Rangers were relentless on the forecheck and pretty solid in their own zone, limiting quality against. This was a stark contrast to both Alain Vigneault and David Quinn, who ran much more complicated DZ schemes that led to bleeding chances against. Gallant is no dummy. Less is more, and he knows it.

On the powerplay, the Rangers ran a 1-3-1 to great results, carrying the team. The penalty kill rotated between a few strategies, with the Rangers preferring a wedge to apply pressure, but collapsing into a diamond and/or a box depending on puck location.

Gallant’s systems aren’t fancy, and he certainly lacks the creativity of a Jon Cooper or a Jared Bednar, but that’s not a fair comparison to the two best coaches in the NHL. Some innovation is nice, but a more consistent effort and better in-game management is what can set Gallant apart from the rest of his peers.

Where we first start to see some kinks in the Gallant armor is with lineup decisions. A big caveat is that roster construction matters, and that’s not on Gallant. But there were many puzzling decisions that irked a good amount of fans.

We can start with taking Alexis Lafreniere off the top line, despite good results. He never elaborated, just stating he wanted to see more. Given Lafreniere’s 19 even strength goals were 2nd on the team to Chris Kreider, there’s a good argument that he should have stayed on the top line. That’s small potatoes though, given Lafreniere’s success and the step forward the kid line took in the playoffs.

The biggest concern, at least for me, was the constant usage Dryden Hunt and Barclay Goodrow in the top six over Lafreniere and Kaapo Kakko. Those kids are the future, and there was nothing in their on-ice results that showed they should have been replaced in the top six. Playing your best players wins games, and this, along with roster construction, is likely a big reason why the Rangers were just a powerplay and Igor Shesterkin until the trade deadline.

Expecting to hear a rant about Greg McKegg? Nope – the bottom six was thin because of poor roster construction heading into the season. That’s not on Gallant, as infuriating as it was to see a team with 5 forwards doing all the heavy lifting.

Once presented with an actual NHL lineup, Gallant made, for the most part, the right lineup choices. It’s hard to argue with a run to the Eastern Conference Final, but Gallant made the road harder on himself with some of his in-game management. The easy one to criticize is running the 4th line, which didn’t have a role other than eating minutes, on regular rotation when trailing. That line had one good shift and then did nothing but get pinned.

However the larger underlying issue was getting a consistent forecheck and running their systems the way they wanted. The 2nd line was very one-and-done in the offensive zone, and when they didn’t score at even strength, they got pinned and didn’t do much else. The top line was drawing the toughest competition, and Gallant’s inability to get Mika Zibanejad away from Anthony Cirelli led directly to their loss in that series. Gallant was out-coached.

It wasn’t just the Tampa series either, as the Penguins had the Rangers on the brink because of the same reason: Gallant was out-coached. They couldn’t stop Sidney Crosby at all, and it took a freak play that injured Crosby for the Rangers to claw back. Perhaps some of this is due to the lack of a true shutdown line, but this is certainly an area where Gallant needs to improve if the Rangers are to be true Cup contenders.

This isn’t meant to be a total tearing apart of Gallant, as the in-game adjustments he did make did show some more subtle improvements. Specifically with the breakouts and regroups and giving themselves more options to move the puck up the ice. It wasn’t perfect, and sometimes you do wish to see more, but not needing to make wholesale changes to the on-ice play is a good thing. Getting more sustained pressure from the top two lines and forming a true shutdown line will go a long way to improving the in-game management.

One of Gallant’s biggest strengths is with his personality management, getting the most out of his team. This was most evident with how he handled Goodrow’s return to the lineup in the playoffs. It’s a topic we’ve covered often here, and it’s the truth. Keeping it from the team gave them a boost to win the last two games against Carolina. That’s knowing your players.

Where Gallant excels is with knowing his players and keeping things simple for them. This is a big year for the Blueshirts, as they won’t (shouldn’t) have the same roster construction issues that plagued them to start the season. With expected regression from Igor Shesterkin and Chris Kreider, managing the personalities and getting the most from the team will be critical. But as will improving in-game decision making and not shooting himself in the foot with his lineup decisions.