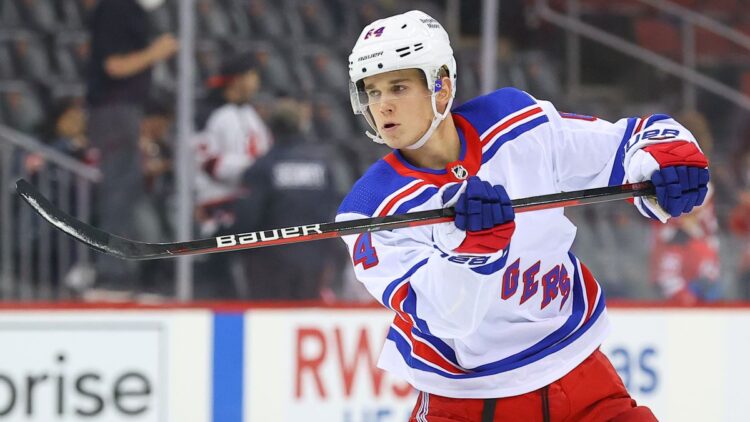 One of the many questions heading into the preseason is what will happen with the Rangers bottom defense pair. Braden Schneider is a lock, but then it’s a big pile of unknown. The Rangers have a pair of high ceiling prospects, at least one dark horse, and one ‘why is he still here?’ guy all vying for a roster spot, and depending on who you ask –or the the level of cynicism– you’ll get a different answer.

What makes this preseason interesting is the Rangers have a true battle for a roster spot among high ceiling prospects. Both Nils Lundkvist and Zac Jones appear to be in direct competition with each other for that final spot. Both have looked fine, if unspectacular, in their minimal NHL time thus far, but neither has shown the Rangers that they belong. At least not yet.

Handedness aside, which is wildly overblown by many, Lundkvist likely has the inside track. He’s the first round pick, he’s the only viable prospect left in the Ryan McDonagh deal, and he’s much more well rounded and “seasoned” with pro hockey. Lundkvist was one of the top SHL defensemen before coming over. He wasn’t really given a fair shot, being saddled with Patrik Nemeth before being sent to the AHL for the remainder of the season. 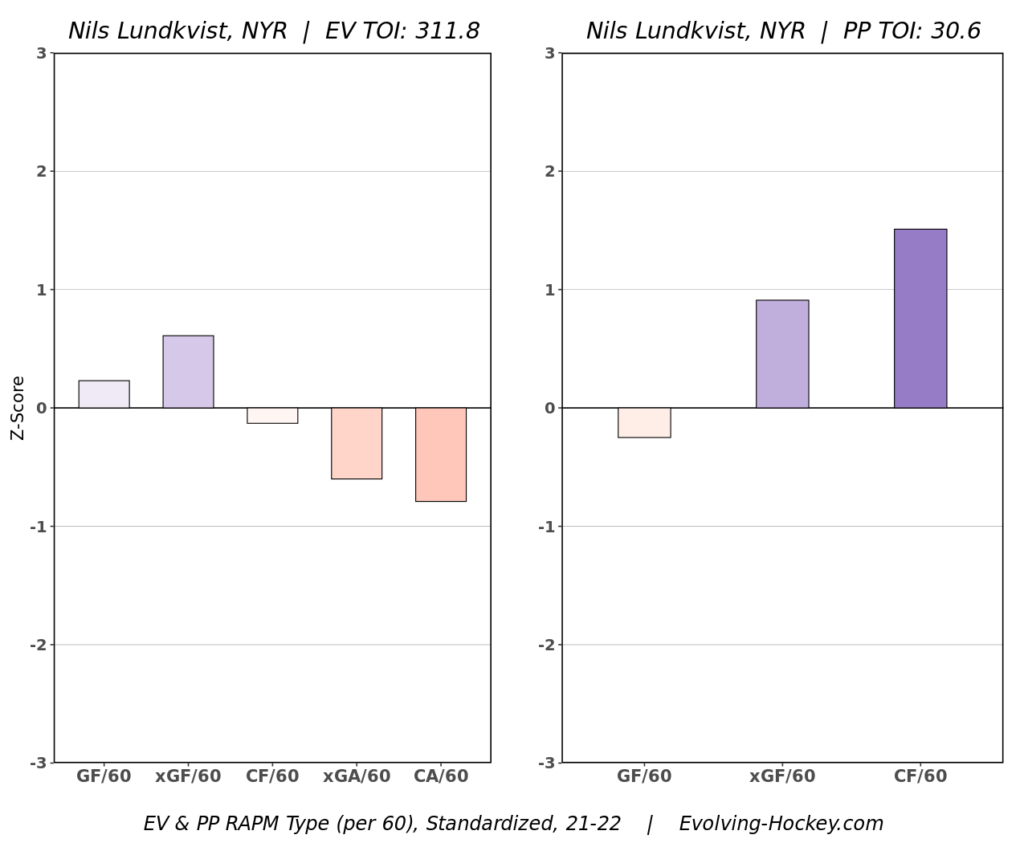 Lundkvist only had 311 minutes last season, almost all with Nemeth, yet he still put up decent offensive play driving numbers –something the Rangers need– and manageable defensive numbers. This is all a sign of good things for Lundkvist, and he’d likely be the top choice for the Rangers bottom defense pair.

Zac Jones is the guy most have penciled in, mainly because of handedness and complementary skill set to Schneider in rounding out the Rangers bottom defense pair. Jones is considered an “offensive defenseman” in the traditional sense, but that doesn’t mean he’s bad defensively. 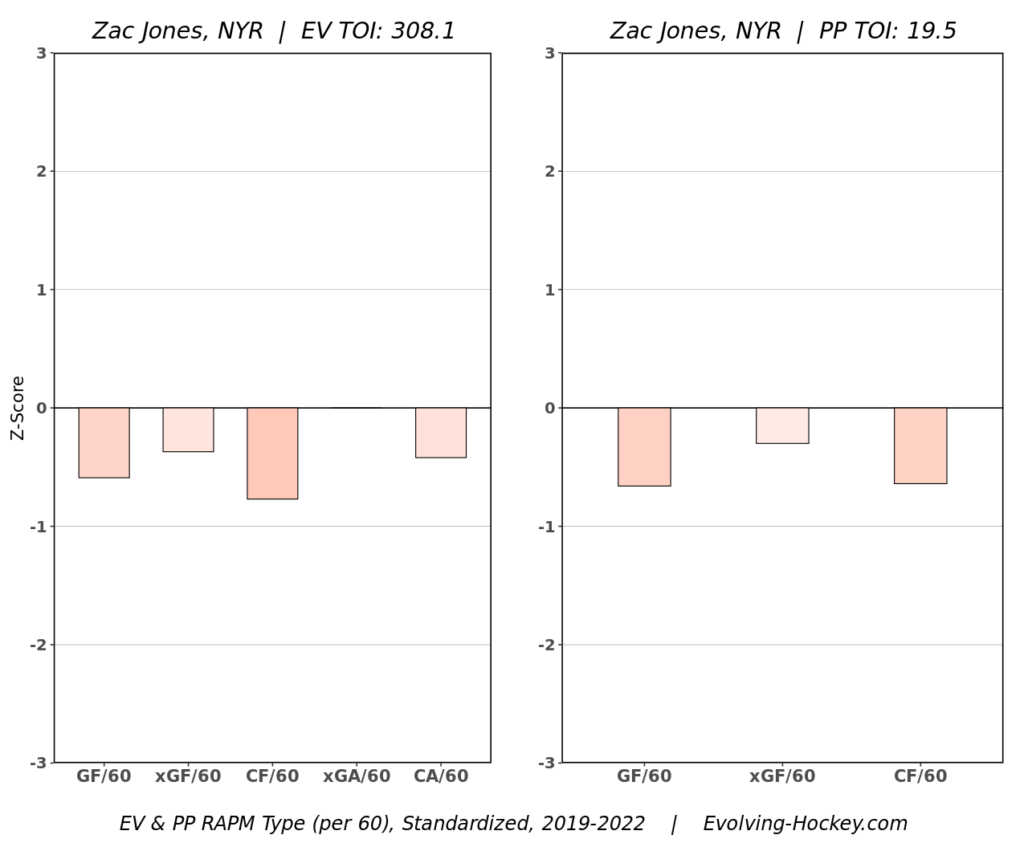 *-I had to use a 3 year sample for Jones to get the same NHL TOI as Lundkvist. Remember, charts don’t tell a full story.

His defensive numbers are comparable to Lundkvist’s, so that’s a wash. But it is interesting to see Lundkvist’s offensive numbers compared to Jones. Jones, who is viewed as “more offensive” actually has worse play driving numbers than Lundkvist. Not surprising, given Lundkvist has far more pro hockey experience, and also to be taken with a grain of salt considering limited TOI, teammate strength, and role.

The edge is likely given to Lundkvist, but Jones is probably #2 in line to start the season on the Rangers bottom defense pair.

Matthew Robertson is a guy that few are talking about outside of trade bait. Robertson is more of a defensive first guy, but he’s good with the puck. He’s a bit like Ryan Lindgren, just better with the puck, and probably less bloody. If Gerard Gallant wants a steady presence to go with Schneider on the Rangers bottom defense pair, then Robertson could be that guy.

Robertson is the dark horse if he both impresses and both Lundkvist and Jones have poor preseasons and camps. There’s a reason why Robertson is still here, especially over a guy like Morgan Barron, who would have filled a position of need. Robertson is being held onto for a reason. He may actually get NHL time on the Rangers bottom defense pair throughout the season, with injuries and all.

Why is Libor Hajek still here? He can’t possibly want to be in New York, knowing he’s likely way down on the depth charts. He’s probably the 7D this season, which is an upgrade from the 9D last season. Chris Drury doesn’t want to lose him on waivers, or at least that’s what we all speculated last season. He’s been better, but he’s still not good.

Hajek’s best path to a regular NHL job, if not via trade, is with multiple injuries and/or all of the above options having poor camps. At that point, he’d be the default option for the Rangers bottom defense pair. Sometimes ‘by default’ is a good phrase. It is not in this case.

There needs to be a Drury/Hajek divorce at some point. Hopefully it is in September. Hajek can’t be happy with his spot on the depth chart. Perhaps Drury can recoup some draft picks for him and Julien Gauthier. But my money isn’t on Hajek being moved. Drury seems to have a blind spot here.

If Hajek is on the Rangers bottom defense pair, something went wrong in camp.