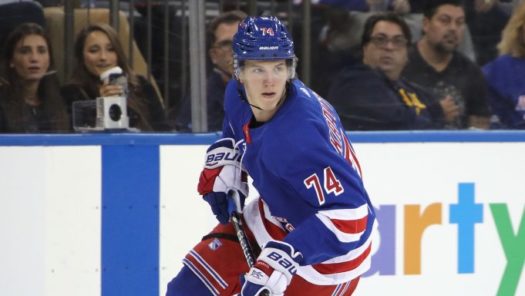 Defying all the odds, signs are pointing to Vitali Kravtsov being a key member of the Rangers forwards next season. All the drama that has transpired is apparently water under the bridge, at least for now, and Kravtsov’s role with the Rangers will be somewhere in the top nine.

Injuries aside, it’s expected that Kravtsov’s role will be in a sheltered third line capacity, most likely with Filip Chytil as his center. It looks like Sammy Blais would be the LW on that line, although it does appear the Rangers are keeping that spot warm for Brennan Othmann.

This does assume we are taking Gerard Gallant at his word that Kaapo Kakko will be in the top six. We can also assume that Gallant will not flinch if either of the top lines get the best defenders the opposition can throw at them. Most teams can only even dream to cover one of the Rangers top lines, let alone both.

That leaves the bottom of the barrel for most teams to defend both Chytil, who thrived in this role in the playoffs, and Kravtsov, who basically carried his Traktor team for most of the season. Assuming –and there is a lot of assuming with this year’s version of the Rangers– both can continue that kind of play, they will feast on third pairs and fourth lines. The LW just needs to keep up.

Again injuries aside, Kravtsov’s role might change as the season progresses. Kakko might struggle to put up scoring numbers with Artemiy Panarin and Vincent Trochek. Or maybe Gallant simply wants to keep Chytil and Kakko together to create a potential possession monster third line. Any and all possibilities are on the table, so just because we pencil Kravtsov into the third line, doesn’t mean he will stick.

Kravtsov’s role is going to evolve with the Rangers as the season progresses. Of course injuries happen, and with Kakko’s injury history, we may see Kravtsov on the second line sooner that expected. He should thrive in either role, given he was excellent in the second best hockey league in the world.

Like it or not, Kravtsov’s role with the Rangers this year is going to be significant. Given where the Rangers are from a cap perspective and from a roster construction standpoint, they need production from cheaper contracts in secondary and tertiary roles. That’s where Kravtsov’s role is slated to be this season.