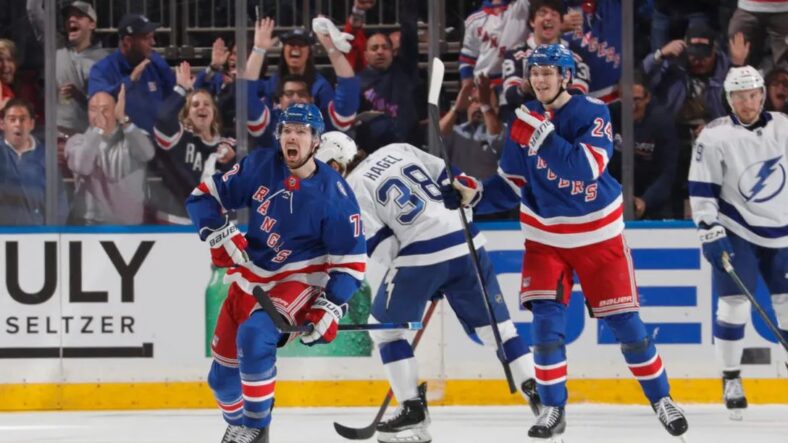 Normally for my trends and analysis pieces I try to pick some theme to tie it all together. That is going right out the window this time, because much like my summer calendar in trying to balance work and social commitments (who needs to sleep in their own bed anyway?), I just simply have random assorted thoughts and some Rangers Q&A going in all different directions about the Rangers.

That being said, let’s start with the lineup as a whole from the view of Expected and Projected Goals Above Replacement per 60 (as this is a simplistic for a player and team both in and out of season) via Evolving Hockey:

I went with the playoff lineup and all available “options.” seeing as the Rangers pulled off a hell of a run with this setup (the figures are from the regular season, however, because the playoff sample size isn’t large enough for GAR). The figures of any deadline players are with the Rangers only. Finally, as a reminder we use xGAR/60 (Expected GAR per 60) because the expected figures normalize for hot/cold shooting and per 60 rates adjust for TOI compared to just using GAR totals.

Frank Vatrano, Andrew Copp, and Justin Braun jump out. The Rangers had the space and Chris Drury did relatively well especially when considering the prices he paid for the trio. Of the regulars that weren’t expected to be true leaders, K’Andre Miller, Alexis Lafreniere, and Kaapo Kakko pop to an extent – and of course we want more of that. The rest is a mix of two categories: need more for most of next year (Artemiy Panarin, Filip Chytil) and just please stop playing them (almost all of the depth forwards, including Ryan Reaves, and Libor Hajek of course).

To lead off, and who knows just how intentional it was due to the cap challenges, Drury has removed some of the poor depth options – especially with the forwards. The risk here is that it will be filled with a lot of unknown from Kravtsov on down, but frankly I would rather see a revolving door of younger Hartford players who can skate with energy for the fourth line rather than the known bad league-minimum veteran (I’m sure there will be a PTO or two come September).

I won’t debate Reaves v. Hunt any longer; if you can’t see that Hunt and good skating would help the fourth line more after that playoffs, that’s your prerogative. Goodrow-Carpenter-Hunt would be a great fourth line to try.

The projections being even keeled across the board just comes with this space. For players with established track records the model naturally pulls them back to somewhere near a weighted average of their past few years. This is good news and bad for the Rangers. The odds of Kreider being as good as he was last year aren’t high but the same can be said about Panarin, as I somewhat expect him to be better next season (even as this was always the risk with him: When will the decline start and stick around?).

With that said: check out Chytil. Evolving Hockey thinks he’ll be the fifth-best NYR player by GAR/60, which would be a great step forward and also would likely spell the end of his Rangers career given what he would then get paid.

Finally, a comment on Trocheck. Overall while the term is hard to understand, he’s a proven play-driver and a defensive upgrade from Ryan Strome. As long as the Rangers get 3-4 good seasons out of him, it could end up being worth having to figure out how to rid of him when the decline hits.

On defense, Miller finally surpasses Ryan Lindgren in terms of impact (and thus should be recognized as such by being paired with Adam Fox). For the depth, it will be interesting if Gerard Gallant cannot help himself and still gives a nod to Tinordi or Hajek. Schneider’s playoffs probably locked him into the 3RD spot, which is fine. However I do think Jones and Lundkvist should absolutely be given a good shot once again.

So are the Rangers better? I give it a probably. I do think that many of the young players took good strides forward and that should continue in theory, but it’s the unknown (or to an extent, the known bad) that doesn’t make it a shoe-in yes. Will Kravtsov actually be given a shot and then, if he is, does he succeed? Does Goodrow get played too far up the lineup again given his lack of ability to generate offense (he is best on the 4L)? Will the young defense be able to gain the “trust” of Gallant? Time will tell.

To wrap this up, I shamelessly crowdsourced some random Twitter inquiries for some Rangers Q&A:

Both. I think Nils will get another 20+ GP run if Schneider stumbles at all out of the gate. Also, don’t be afraid to play one of those three on their offhand to find the best pair… in theory all can handle the puck, so let them do it.

First of all I just hope that our tall and crisp Czech Pilsner playoff star is still on the roster come training camp. Beyond that, you should all know by now I’m about experimenting. I shudder at the thought of the kid line being the 3L to start the year – if anything make them the 2L and let Trocheck make the 3L better. There are plenty of other worthy combos that I’m sure will be brought up beyond just that one simple idea (which was the same idea with Strome, but Trocheck is better).

Anytime anyone brings up this topic I am obligated to remind everyone that the Rangers could indeed try these two seemingly great complement pairings and, if it doesn’t work, they can go back! Yes, give this run and I also want to point out that Miller-Fox was the only pair for the Rangerswith >30 TOI in the playoffs that had an Expected Goals For % over 50 (5v5, SVA, via EH). Makes you think…

Yes. However I want to take this chance to point out (so that people aren’t outraged, which will happen anyway) that pre-season models will still not like NYR due to how they played the majority of the year – which is fine! Well, it’s not fine, for a good 40-50 games they didn’t’ play well and Igor was that good. But if they can bottle that post-deadline play, their 5v5 play results will likely be a mix of how/if the youth step up, how the lines gel with Trocheck, and if Gallant can stay away from the bad depth options (so basically the same as last year).

Alright, that’s enough for now. Wow, an entire article with only two charts… it really is the worst part of the sports calendar year.