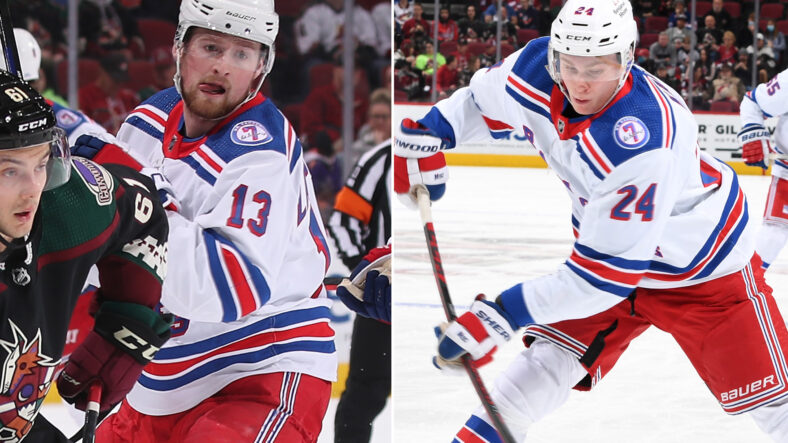 With the Rangers offseason down to tying up loose ends, the focus is shifting to line combinations and projecting what the Rangers top lines will look like. A successful Rangers rebuild hinges on Alexis Lafreniere and Kaapo Kakko taking top-six roles, and we know Gerard Gallant has stated they will both be there. If we take him at his word, then the Rangers are banking on Lafreniere and Kakko to take the next step this season and beyond.

It’s no secret that neither Lafreniere nor Kakko have produced to some people’s expectations as #1 and #2 overall picks, respectively. Kakko struggled mightily in his rookie season, but has steadily progressed and shown he belongs in the NHL. Still, his 7 goals and 18 points last season isn’t good enough for the Rangers if he’s in a top-six role. Kakko also needs to stay healthy. His confidence is growing under Gallant though, and that is a good thing.

Lafreniere is in a bit of a different situation, as there were (unrealistic) expectations that Lafreniere would be a top player in the league immediately. He, too, struggled his first year, but had 19 goals at even strength last year. His scoring line isn’t anywhere near sexy enough for some, but that’s entirely due to no powerplay time.

A successful Rangers rebuild, this season and beyond, hinges on this duo taking critical top roles.

Lafreniere, Kakko will get big even strength minutes

One thing we can count on, barring significant injury or games disappearing, is that both Lafreniere and Kakko will get big even strength minutes. While this does take Gallant at his word, something some folks are loathe to do, it’s hard to not take him at his word right now. Healthy scratch aside, which was dumb, both Lafreniere and Kakko are the keys to the successful Rangers rebuild.

We saw how this duo and Filip Chytil dominated in the playoffs, and this did wonders for their confidence levels. Kakko’s healthy scratch is more than likely just a blip, and nothing to be overly concerned about. It is expected that Lafreniere will be with Chris Kreider and Mika Zibanejad on the top line. Kakko will most likely get the first shot with Artemiy Panarin and Vincent Trocheck on the second line.

This is the first step in their evolution to eventually take the reins as the next Rangers core. Lafreniere is already producing at even strength, and he will most likely get powerplay time to help with his overall stat line. Spoiler alert: More on that coming soon.

Kakko is a bit more of a wild card, as he’s already shown he can be a shutdown player than can drive play. It’s just the offense that hasn’t caught up. But there is a reason why he was the #2 overall pick. The talent is there, his growth was stunted by a combination of David Quinn, injuries, and the pandemic.

Don’t discount Vitali Kravtsov as a potential top-six skater either, with Kakko playing with Filip Chytil to continue that chemistry they showed in the playoffs. Spoiler alert: More on this coming soon too.

A successful Rangers rebuild hinges on their success

One of the more humorous headlines right now is that the Rangers are “hoping” that Lafreniere and Kakko can step up in top-six roles. After a surprise run to the Eastern Conference Final, the Rangers are losing Ryan Strome, and won’t get 50 goals from Chris Kreider again. Thus, the offense needs to come from somewhere. But here’s a dirty little secret: We know. We’ve known for a while.

It’s not just this year that hinges on Lafreniere and Kakko taking the next steps. It’s the key to a successful Rangers rebuild. If they do not progress and the Rangers do not develop them properly, then the rebuild will fail. You cannot succeed and take the next steps without your #1 and #2 overall picks progressing and taking control. Full stop.

The focus is on next season, as the Rangers need to replace Strome’s 21-33-54 and likely 20 of Kreider’s goals, plus whatever Dryden Hunt and Barclay Goodrow put up as rotating 2RWs last season. Trocheck should pick up a good chunk of the slack, but Lafreniere and Kakko need to pick up the slack as well. If Trocheck can pick up 20, can Lafreniere and Kakko pick up the other 30 goals?

The answer to that not only impacts next year’s success, it impacts a successful Rangers rebuild. If this duo doesn’t step up this year and beyond, then there is nothing the Rangers can do to turn the corner once the current core of Kreider, Panarin, and Zibanejad ages out. High end talent wins. The Rangers have a pair of top-two picks that need to step up if this is to be a successful Rangers rebuild.