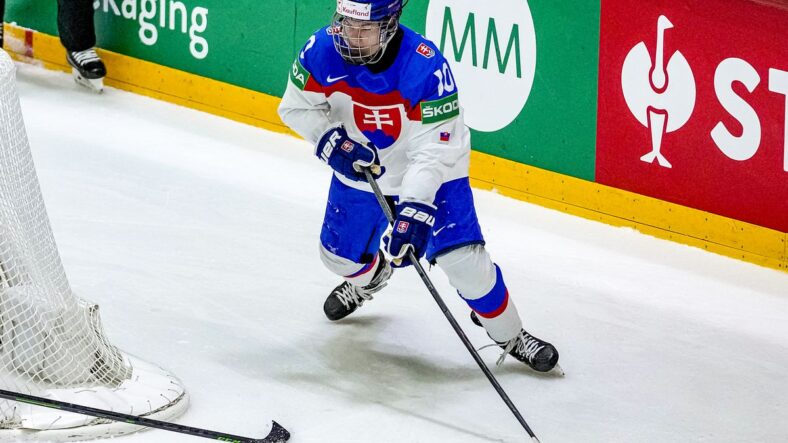 For the first time since 2016, the New York Rangers entered the draft without a first-round pick, which certainly impacted some of the Rangers 2022 draft grades. While there was some speculation, or more likely hope, that the team would trade into the first round, that never came to fruition. Luckily for Rangers fans, this was one of the most exciting drafts to watch in recent years, so we still got our dose of drama and entertainment while watching the first round – Shane Wright dropping to 4 is wild to me, but I am so glad he is not a Devil.

The Rangers did end up making six picks in this draft though, and two of those picks were acquired in the trade with Colorado for Georgiev. While overall the strategy was a mixed bag, Drury and his scouting staff did manage to come away with a couple of promising prospects in a draft many believed to be subpar. Let’s take a look at the players the Rangers came away with.

While I know most were pinning their hopes on the Rangers finally taking a center with their first pick for the first time since Andersson and Chytil in 2017, this is a selection that people should be very happy with. Adam Sykora is one of the youngest players in this draft, yet he spent last season playing – and producing – in a men’s league for one of the best teams in Slovakia.

He is a little undersized at 5’10”, but he has an incredible compete level, and his toolkit grades out well across the board. His age gives him a lot of runway as a prospect, and it would not be at all surprising if he broke out next season. He will be a key player for Slovakia at this summer’s World Junior Championship (yes, that is actually happening in August), which will give Rangers fans an early look at arguably their second-best forward prospect.

He may not be a center, but Sykora is a player I wanted the Rangers to target with this pick, and provides as much upside as any other player left on the board in my opinion.

We picked a center! McConnell-Barker played on a deep Soo team and received very little powerplay time. While his stat-line of 49 points in 68 games may not blow you away at first glance, a look under the hood reveals that this is a player with NHL upside.

Primary points dominate his production makeup; According to Pick224, he contributed .65 primary points (goals or primary assists) per game. Unfortunately, we are not able to adjust for his ice-time, but it is an impressive rate considering almost all of his points came at even strength. He also has legitimate goalscoring upside at the next level, as he posted a 15.13 shooting percentage on the season.

I would expect an increase in minutes and powerplay time to lead to more shots and goals next season. Scott Wheeler and Corey Pronman had him ranked at 57th and 48th respectively, so this appears to be a very solid value pick at 97 with some breakout potential.

Laba is a player that I am not really familiar with and unfortunately, he is not included in Pick224’s dataset. There are definitely forwards in the USHL that I would have considered ahead of Laba, but I am going to hold off on being too critical until I learn more about him. While his EliteProspects page says he is a Colgate commit, it sounds like he is actually heading off to Colorado College next season. He is a center though, so it is good to see an organizational need addressed.

This pick really doesn’t make too much sense to me. Mancini was first eligible for the 2020 draft but was passed over twice. The Rangers will be more familiar with Mancini than most, as he played in the Frolunda system with 2019 second-rounder Karl Henriksson. Here is an excerpt from EliteProspects’ 2020 Draft Guide,

“His north-south speed was decent for his size. He was effective when he kept things simple and made quick, short-range plays to stay out of trouble. Mancini’s ability to read the game off the puck was something that stood out. He also made excellent reads and played a very alert game defensively.”

Perhaps the Rangers have found a player in a premium position with some defensive upside. I am personally very skeptical of D+2 players that struggle to produce, and while points are not the best predictor for a defenseman, 5 points in 38 games is unimpressive.

Maxim Barbashev, the younger brother of Blues forward Ivan Barbashev, is one of the oldest first-year eligible players in the draft. His toolkit is a real mixed bag, with below-average footspeed but solid skill and compete. It is concerning that his scoring rates dropped from season to season, although the D-1 sample is only 10 games.

Given his age – he is one year away from being AHL eligible – he will need to step up his production significantly next season. He certainly isn’t as off the board as Laba and Mancini, but the Rangers system is full of skilled players with skating issues.

Karpa is a player I am familiar with, as he filled the role of a depth player on the 2019/20 U18 NTDP squad with Matty Beniers and Jake Sanderson. Karpa is now a D+2 player who posted 12 points in 33 NCAA games last year. Look, it’s the 6th round, it’s very unlikely you are picking a guy who will help your organization at this point in the draft. It is not the end of the world if you go very off the board here.

That said, you are not shooting completely blind here, and taking a player with upside as limited as Karpa’s is silly to me, especially with your last kick at the can in your draft. Want to take another over-age player? How about Connor Kurth, who was passed over in last year’s draft as one of its younger players, and posted 81 points in 62 USHL games last season.

Or how about Jeremy Wilmer, who led the USHL in scoring with 98 points. Yes, he is a very small player. But I am going to take the small player with a long track record of production over the bigger player with no production every time when it comes to drafting forwards this late in the draft. It’s about the philosophy for me, you just have to give yourself the best chance to have one of these late picks pan out and I don’t think Karpa does that.

I know it might feel like I am very down on the Rangers 2022 draft grades because of the way it progressed, but overall I think there is plenty to be excited about. Sykora could really pop next season, that might end up being a steal, and at the very least I think he will be a useful 3rd line winger that the fans love. McConnell-Barker was excellent value at his draft position and is another legitimate breakout candidate with an NHL toolkit. Those two picks were the most important, so their grades should be weighted accordingly.

The second half of the draft was disappointing, you just want to see a little more ambition from Drury and his scouts. But Laba is really an unknown quantity, and Barbashev at least has the upside to become an important player for the Wolfpack. And I hope it goes without saying, but I hope the players I am not too high on at this point in time go on to prove me wrong.

Overall, this was a fun draft to watch and follow for the past couple of years. I have been very busy for the past year with life, so I did not feel remotely informed enough to make my own draft rankings. The good news is that I have already started work on draft rankings for the 2023 draft, which I will be following very closely and I will be posting all of that content here throughout next season!