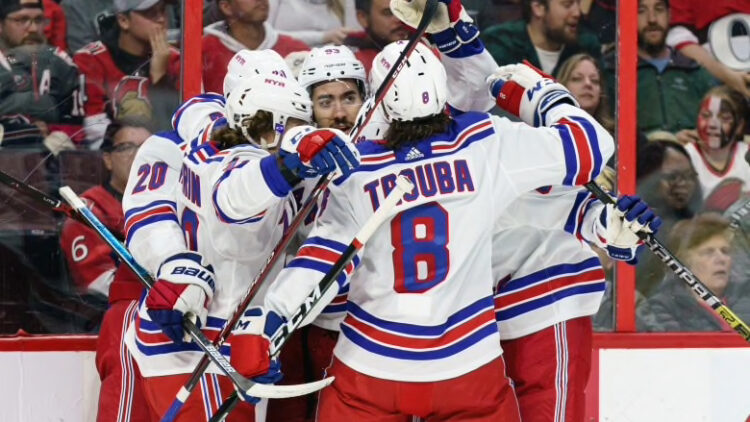 It may seem odd to say, but the Rangers current core, as constructed, may have just two seasons left together. Given salary cap constraints, age, and current contract structure for some core players, it seems to be the case. That doesn’t mean the Rangers are going to tear it down again, not by a long shot. It means the focus on the team will shift, and we may see players deemed untouchable moved out in the 2024 offseason.

The biggest driver here are the big contracts on the Rangers current core: Chris Kreider, Jacob Trouba, Artemiy Panarin, and to a lesser extent, Mika Zibanejad. As of July 1, 2024, there are key contract terms that change for all four.

As a reminder, all bonuses are paid on July 1 of that year, so trading a player after July 1 means the original team must pay the bonus. The Rangers have the financial muscle to pay the bonus and then find more value in a trade.

Key contract terms expiring for the Rangers current core doesn’t mean they are going to look to move on from all of them. In fact, I’d venture a guess that only Trouba is the “sure thing” to be moved once able to. The Rangers aren’t going to trade Panarin if he’s still putting up 100 points per season. Ditto Kreider if he keeps being an integral part of the offense, powerplay, and locker room. Zibanejad is more of an outlier here, but his contract terms were worth noting.

It’s still up to the kids

While play on the ice will likely dictate what the Rangers do with these guys once they have more flexibility, salary cap and kid performance will also play a role. The goal for Chris Drury wouldn’t be to jettison contracts for the hell of it. It would be to transition the big minutes and contracts to Alexis Lafreniere, Kaapo Kakko, and others.

Lafreniere, Adam Fox, Igor Shesterkin, K’Andre Miller, most likely Kakko and Brennan Othmann, and possibly Filip Chytil and Vitali Kravtsov are the next wave of the core. We’ve mentioned this before, as Kakko needs a new deal now while Lafreniere, Miller, Chytil, and Kravtsov will need new deals at the end of the 2022-2023 season. Say what we want about Kakko and Kravtsov, but as of this writing they are parts of the team. We are taking Drury and Gerard Gallant at their word.

Given the current cap crunch with the Rangers current core, they are backed into a corner of needing to bridge all of these guys until they either have cap flexibility or the cap ceiling goes up. This means larger contracts when they have arbitration rights and/or when their bridge deals expire. Freeing up Trouba’s $8 million seems like a no-brainer, but they may need more.

That said, nothing is guaranteed. We’ve seen what Lafreniere, Kakko, and Chytil can do from the postseason. There’s a chance that was a blip, but it’s more likely they finally found a groove and the confidence that a 21 year old kid normally needs. Chytil is the elder statesman here at 22 years old. It’s not like these kids are old.

The current state of the Rangers appears to be two different teams, if that makes sense. The first team is as we see right now, with some minor tweaks needed to make another few runs. This is a win-now team. They have the core pieces in place, the skill is there, and they just need to fill in the holes. Luck will also need to be on their side over the next two seasons.

The next team is the 2024-2025 team, the one that transitions to the new generation of Rangers to carry the team. Naturally there will be carry overs, but the core of the team will shift to Lafreniere and others. They will start getting the big minutes, top powerplay time, and be expected to lead the team on and off the ice.

On paper, the Rangers will be able to keep winning and keep their Stanley Cup window open during this transition. There is enough talent to weather the storm during that transition. And if we are seeing it, you know Drury knows it too. Despite what we may think, they are very in tune with the cap situation and what they need to do. The next two seasons are all-in seasons to win now with the core. After that, it’s a transition period to the next core that hopefully brings another Cup or 20 home.