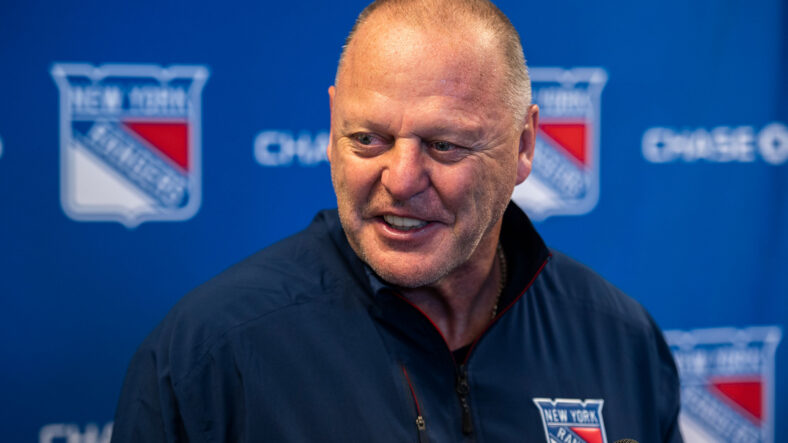 Rangers adjustments for Game 5 are needed in a must win situation for the Blueshirts. Letting Tampa win three in a row heading into a Game 6 at Amalie Arena is not the best situation, thus winning Game 5 and ensuring another game at MSG if needed is a must. The Rangers played Tampa’s game in Games 3 and 4, but we are still optimistic for Game 5 and the series. But to win, there are three key Rangers adjustments for Game 5.

1. Adjust the breakout to gain speed through the neutral zone

One of the key adjustments Tampa made in Games 3 and 4 was shutting down the Rangers speed. They did this by backing up their forecheck, running a 1-2-2 with F2/F3 around the blue line, and D1/D2 around the defensive zone blue line. This, in essence, took away the stretch pass the Rangers love so much, forcing them to carry the puck out of their zone.

Defensive zone play aside, which we will get to, the Rangers were still trying what didn’t work, instead of working with what was given to them to gain speed through the neutral zone. The Rangers have a tremendous speed advantage over Tampa, and they didn’t utilize it at all the last two games.

Lightning tie the series with a convincing 4-1 win. Rangers breakouts were a mess and Tampa held them to a rudimentary offense. Palat/Kucherov providing most of the money plays & doing great work in transition. pic.twitter.com/XBPLku6oFH

The Rangers were torched by zone exits, with just 34 of 65 retrievals leading to a zone exit, and only 28 of those being with possession. The breakout with control will resolve this issue.

Start small, give yourself more options on the breakout by cycling lower in the zone. In turn, Tampa will start defending more aggressively, which opens that stretch pass again.

The Rangers are very inconsistent on the forecheck. They run a standard 1-2-2, but more aggressive than Tampa’s version. Tampa doesn’t have the best puck moving defensemen, so the goal should be to disrupt them as much as possible. F1 should be in and pressuring the puck carrier, with F2 and F3 lower in the offensive zone to read the play and cut off options.

The risk/reward ratio is high, since odd man rushes can happen when Tampa is able to break the forecheck. But in theory, they aren’t able to do so with speed, thus the defense can step up in the neutral zone, slowing them down further and allowing for the forwards to back check.

Even in the event of an odd man rush, the Rangers are willing to trade chances with Tampa since they have Igor Shesterkin in net. A track meet with Tampa favors the Rangers, as it opens up the game and allows the Rangers to use their speed again.

If there’s a theme in points one and two, it’s to turn the game into a track meet.

The Rangers were not good in their own end in Game 4. Part of that is personnel related, as losing Filip Chytil midgame hurt as much as missing Ryan Strome all game. But the Rangers still allowed 9 high danger chances to Tampa in Game 4.

This was the most they’ve allowed all series. While it seems counterintuitive to say open up the game and limit high danger chances, it’s what they did in Game 1. The Rangers allowed 19 shots off the forecheck and 14 shots with 2+ passes, meaning the Rangers simply could not keep up defensively.

This series is far from over, but the Rangers do need to make adjustments against a well seasoned team.